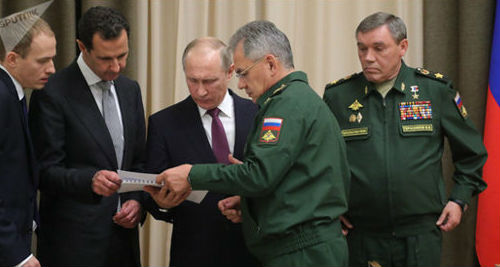 On November 26 Israel’s Jerusalem Post reported a sensational offer from Syrian President Bashar al-Assad to Israel’s Netanyahu conveyed via Russian President Vladimir Putin. According to the Israeli paper, Assad is ready to agree to a demilitarized zone of up to 40 kilometers from the Israeli border in the Golan Heights as part of a comprehensive agreement between the two countries in return for an Israeli guarantee it will not continue to try to remove Assad’s regime from power. The discussion took place in the recent surprise meeting in Sochi between Assad and Putin, just prior to Putin’s meeting with the leaders of Turkey and Iran to discuss Syria.[1]

The report also claims that Putin then called Netanyahu to relay the message, and that the Israeli prime minister said he would be willing to accept the deal, but that Israel’s goal of eradicating Iran and Hezbollah from the country would remain in place, suggesting a typical Netanyahu ploy to have his cake and eat it too.[2] The problem to date with the report of a possible Assad offer to demilitarize the zone around the Golan Heights is that it is not confirmed independently by any Syrian government sources nor Russian, only by an “unnamed Israeli source” quoted in the Kuwait newspaper Al Jarida and later carried in Israeli media.

A more reliable indicator of Netanyahu policy towards Syria in the Golan region is a statement he made on November 13 when he declared that Israel will continue to take whatever military action inside Syria it deems necessary: “I have also informed our friends, firstly in Washington and also our friends in Moscow, that Israel will act in Syria, including in southern Syria, according to our understanding and according to our security needs.” [3]

The real issue around the region of the Golan Heights however, is not so much any security threat to Israel, rather it comes from the unspoken Netanyahu agenda in the Golan Heights. The Golan Heights is a part of Syria Israel has illegally occupied since the 1967 war, and one which various Israeli governments earlier appeared ready to give up in return for legal recognition of the State of Israel by Syria. [5]

Ready that was, until the outbreak of the NATO and Saudi-led destabilization war against Bashar al Assad in 2011 when the prospect of permanent occupation seemed an option for Israel in the chaos and destruction going on in Syria. Now the strong presence of Russian military on the ground as guarantor for a Syrian government stabilized control of Syria after six years of war brings up for Netanyahu the horror scenario that, rather than being able to grab permanent Golan Heights occupation de jure as seemed within grasp just two years ago, Syria’s Bashar al Assad, backed by Russia and Iran, might be planning to even retake the illegally occupied Golan Heights from Israel.

That would have huge implications for Israel and its energy geopolitics.

In February, 2017 only days after his inauguration President Donald Trump met with Israeli Prime Minister Netanyahu. The media coverage of the talks focused on their views on the Palestine issue and ignored what was far and away for Netanyahu the crucial issue, the Trump recognition of the Israeli status of the Israeli-occupied Golan Heights. [6] Netanyahu made a similar request of US President Obama only to be turned down cold. The question is what is it aside from issues of military security that gives the Golan Heights status such urgency in Tel Aviv.? The short answer is discovery of oil, and lots of it.

On October 8, 2015, Yuval Bartov, chief geologist from Genie Energy’s Israeli subsidiary, Afek Oil & Gas, told Israel’s Channel 2 TV that his company had found a major oil reservoir on the Golan Heights: “We’ve found an oil stratum 350 meters thick in the southern Golan Heights. On average worldwide, strata are 20 to 30 meters thick, and this is 10 times as large as that, so we are talking about significant quantities.” The report estimated that the Afek oil discovery in the Israeli-occupied Golan Heights near the Sea of Galilee could contain billions of barrels of oil. Israel consumes a mere 275,000 barrels of oil daily. To call the Golan discovery a game changer for Israel is understatement. [7]

What is this Genie?

If we ask more about this company that sits on exploration rights illegally granted them by the Israeli government to drill for oil in the Golan Heights, the issue becomes extraordinarily interesting. Since the October, 2015 announcement by Afek Oil & Gas, further news of the discovery has gone silent and company officials only state that the commercial viability of the find has not yet been proved. [8]

Suspiciously, aside from the enthusiastic Afek geologist interview on Israeli TV, one which the US parent company perhaps regrets, no real information was disclosed, other than “signs of oil,” and in its filings to the New York Stock Exchange by Genie Energy, Afek’s parent company, stated that the quality of the findings was “unclear.” [9]

However, when we go deeper behind the Afek subsidiary, it leads in a trail to a most unlikely city, Newark, New Jersey, hardly an oil boom town. Newark is the headquarters of Genie Energy and Genie Oil & Gas, the parent company of Afek. Now it begins to get really interesting.

Genie Energy and Genie Oil & Gas was founded by Howard Jonas, presently Chairman and CEO. Jonas, who is a major contributor to orthodox Israeli projects, was head of a telecom group called of IDT Telecom, original parent of Genie until Genie was spun off in 2011 as a separate company with Jonas still in charge.

What then ensued was the collection of some of the most influential power-brokers in the US, UK and Israel around the fledgling Genie Energy of Newark, New Jersey. Jacob Lord Rothschild of the London banking dynasty and his business associate and influential media magnate, Rupert Murdoch, owner of Fox News, the NY Post and Wall Street Journal among others, both hold major equity stakes in Genie Oil & Gas and became members of the Board of Directors, as well as of the Genie Strategic Advisory Board where they joined among other notables Dick Cheney, former CEO of Halliburton, the world’s largest geophysical services company, and Michael Steinhardt, the billionaire hedge fund investor and board member of the pro-Netanyahu Washington think-tank, the Foundation for the Defense of Democracies. Genie Advisory board members also included some of the most seasoned executives in the global energy industry, among them Eugene A. Renna, former Board member of Exxon Mobil, and Harold Vinegar, Former Chief Scientist of Royal Dutch Shell. [10]

Landrieu sponsored the 2013 United States-Israel Energy Cooperation Enhancement Bill which gave a legal fig leaf for US energy companies like Genie to explore in the illegally occupied Israeli Golan Heights, a sly way to further a de facto Israeli annexation of Golan territory. In October 2011 as US Senator, Mary Landrieu led the first official US Energy Mission to Israel. Its stated goal was to “introduce US firms to Israel’s rapidly expanding oil and gas market and to assist US companies pursuing export opportunities in this sector,” according to the US Department of Commerce. In reality, Landrieu was lobbying on behalf of Noble which got exploration rights to Israeli offshore gas, developing the giant Leviathan field in the eastern Mediterranean, and for Genie which now has rights in the Israeli-occupied Golan Heights. [12]

Granted, even if Genie manages to develop oil recovery from the Golan field in the billions of barrels over time, or not, it is clear that a far deeper agenda lies behind Netanyahu’s vigorous defense of the illegal Israeli annexation of the Golan Heights than merely keeping it free of Iranian and Hezbollah soldiers. Could it be that he is convinced that if a US-backed oil company with the board backers such as Genie Energy is working with him, Washington will be forced to back the Israeli ownership claim to the strategic Golan Heights? Time will tell.

F. William Engdahl, Newsbud Senior Analyst & Producer, is an international best-selling author, political economist, lecturer and political risk consultant. He has specialized for more than thirty years in geopolitical analysis of global events, with special focus on the interrelations of economics with politics. Mr. Engdahl has a degree in politics from Princeton University (USA), graduate study in comparative economics at the University of Stockholm, and was appointed Visiting Professor of International Political Economy at China Northwest University, Xi’an in 2006. Among his best-known books are, A Century of War: Anglo-American Oil Politics, Gods of Money: Wall Street and the Death of the American Century and Seeds of Destruction: The Hidden Agenda of Genetic Manipulation. His most recently published book, The Lost Hegemon: Whom the gods would destroy is about the CIA and political Islam.