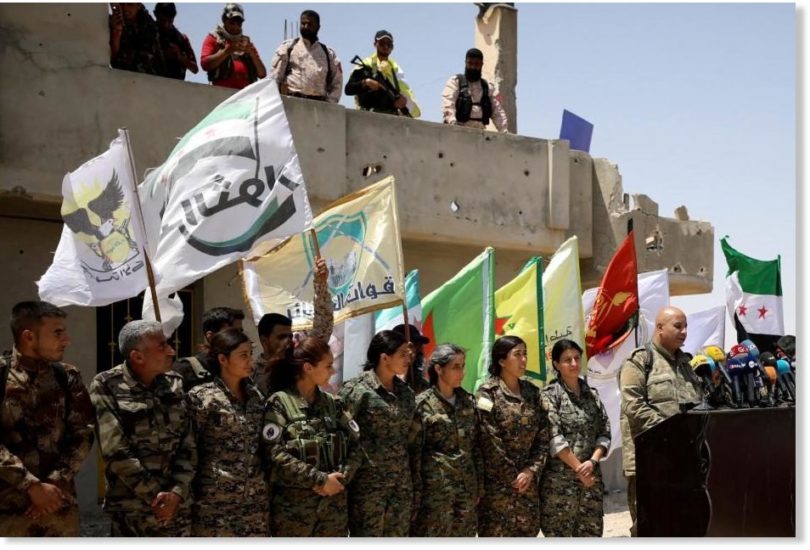 We all know the CIA and its Saudi friends created ISIS as a proxy army to fight against any countries that dared stand up to American imperial aggression. But just for those who still doubt that truth, now we have the testimony of Talal Silo, a former Pentagon-backed commander of the Syrian Democratic Forces (SDF), to reconfirm just who has been pulling the strings on ISIS in the Middle East.

It was previously reported in October that the US allowed ISIS fighters to be bused out of Raqqa to other parts of Syria to continue their war on the Syrian people. Silo, who was also the SDF spokesman back in October when the deal was made and has now defected to Turkey, said that about 300 ISIS fighters had been allowed to leave. But in a recent interview with Reuters, he said that the real number of jihadists allowed to leave was far higher than that:

“Agreement was reached for the terrorists to leave, about 4,000 people, them and their families,” Silo said, adding that all but about 500 were fighters.

He said they headed east to Islamic State-controlled areas around Deir al-Zor, where the Syrian army and forces supporting President Bashar al-Assad were gaining ground.

For three days the SDF banned people from going to Raqqa, saying fighting was in progress to deal with militants who had not given themselves up.

“It was all theater,” Silo said.

“The announcement was cover for those who left for Deir al-Zor”, he said, adding that the agreement was endorsed by the United States which wanted a swift end to the Raqqa battle so the SDF could move on towards Deir al-Zor.

Note also what Silo said about the famous “last ditch battle” of Raqqa:

He told Reuters that the account of a last-ditch battle was a fiction designed to keep journalists away while the evacuation took place.

For three days the SDF banned people from going to Raqqa, saying fighting was in progress to deal with militants who had not given themselves up.

“It was all theater,” Silo said.

“The announcement was cover for those who left for Deir al-Zor”, he said, adding that the agreement was endorsed by the United States.

So the US military directly aided its alleged terrorist enemy – an enemy that was the ostensible reason for the US presence in Syria in the first place – by allowing them to flee to other parts of Syria and continue the destruction of its people, infrastructure and essentially its history. As part of the deception, the US government and CIA manufactured an elaborate cover story about a “final battle” in Raqqa in order to keep the media away and hide the fact that the ‘exodus’ was taking place.

The SDF commander claims that he came forward because he was “disillusioned” over the structure of the US-backed SDF and because in Raqqa, “they destroyed a city, but not the enemy”. Then again, that’s pretty much how the CIA has operated since its creation, using the US military and proxy forces as tools to achieve a covert agenda.

To those of us who are well aware of the true nature and role of the CIA over the last 80 years, it’s no surprise that they would be disinclined to get rid of an ‘enemy’ that they themselves created, financed and armed. Such ‘fake opposition’ is the CIA’s tried and tested way to justify the invasion, occupation, destruction and looting of any country they deem not compliant enough with the wishes of the US ‘deep state’.

Thankfully, this duplicitous, and frankly evil, gambit failed, courtesy of Russian, Iranian and Syrian military competence and will power. Such was the level of Syrian gratitude that Assad himself went to Moscow and personally thanked Putin for saving Syria. Just a few days ago, the Russian military declared that all of Syria has been liberated of ISIS cells. Iraq has also declared ISIS to be destroyed in their country. But let’s not be too complacent. The fact that the CIA was so eager to rescue thousands of its proxy ISIS forces suggests that they aren’t done playing their deadly games just yet. Who knows where those rescued CIA assets will turn up next.

It should be crystal clear by now that ISIS is a US-backed proxy military force that the CIA uses to destabilize and control countries who have “unfavorable dispositions” towards the American Empire. No wonder Korea’s Kim Jong-un has locked down North Korea; he is, no doubt, fully aware of what happens to countries who let their guard down and take US claims of adherence to ‘international law’ at face value (witness Libya).

Make no mistake, the CIA excels at killing innocents as part of a wider US geopolitical strategy, especially when those innocents happen to be unlucky enough to live in the ‘wrong’ country. At some point, the ‘innocents’ in the US may find themselves facing payback, in one form or another, for all the damage their government has done in their name, and the whole world will likely sit back and watch, knowing that it will be justifiablepayback for all the destruction that has been wrought in the name of freedom, democracy and the American way.