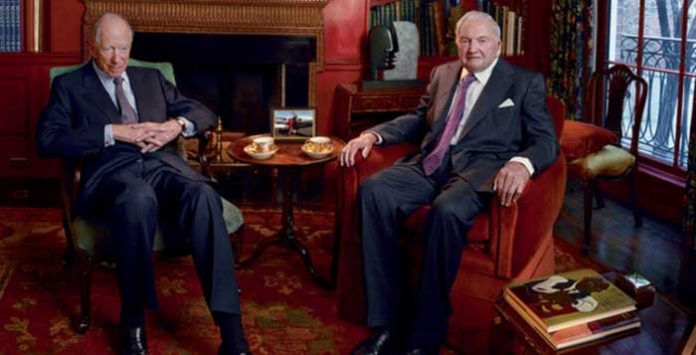 Henry Makow has a Ph.D. in English Literature from the University of Toronto in 1982 and is the author of the best-selling book Cruel Hoax: Feminism & the New World Order. Makow grew up in a Jewish family.

Makow has been completely misrepresented by thought-police organizations such as the Southern Poverty Law Center. “The elite operates by fostering division and conflict in the world,” he says. “Thus, we don’t realize who the real enemy is. Idealists in my parent’s generation were disillusioned when the Communist dream of universal brotherhood turned out to be a snare.”

“Some even believe we are part of a secret cabal working against the best interests of the United States, characterizing my family and me as ‘internationalists’ and of conspiring with others around the world to build a more integrated global political and economic structure – one world, if you will. If that’s the charge, I stand guilty and I am proud of it.”[1]

The Rockefellers were indeed internationalists who sought to project the New World Order ideology on much of the world using Darwin’s survival of the fittest. As one writer puts it, John

“was able to demonstrate that what was good for civilization was also good for business—and vice versa. The large corporation that grew by swallowing up its smaller competitors was merely exhibiting the law of the ‘survival of the fittest…’”[2]

Here again we see that Darwinism does play a role in bringing about the New World Order ideology, which is fundamentally at odds with the moral law or practical reason.[3] As I have argued in the past, Darwin’s entire project was doomed to fail precisely because he deliberately excluded morality from his weltanschauung and substituted things like strife, i.e., survival of the fittest.

Leaving these issues aside, the Rockefellers were what Edward Bernays would have called “invisible governors,” the real people who actually manipulate the masses through propaganda and ideological motives. “Those who manipulate this unseen mechanism of society,” said Bernays, “constitute an invisible government which is the true ruling power of our country.”[4] Bernays continued to say that

“in our social conduct or our ethical thinking, we are dominated by the relatively small number of persons—a trifling fraction of our hundred and twenty million—who understand the mental processes and social patterns of the masses. It is they who pull the wires which control the public mind, who harness old social forces and contrive new ways to bind and guide the world.”[5]

Based on this view, it is pretty obvious to deduce that “democracy” and “freedom” are just buzz words which have no metaphysical meaning in the New World Order. “Democracy” and “freedom” are real only if they represent the views of the rich and powerful. And the Rockefellers worked tirelessly to impose the New World Order democracy upon the masses.

So, what have been the consequences of New World Order democracy? Did the Rockefellers play a role in essentially destroying the family, most specifically women? Expand on those issues for us, Henry Makow.

Henry Makow: In 40 short years, many women have lost touch with their natural loving instincts. Consequently, the family is in disarray, sexual depravity is rampant and birth rates have plummeted.

I will expand on the Rockefeller’s role, but first we need to remember that for a woman, love is an instinctive act of self-sacrifice.

She gives herself to her husband and children and is fulfilled by seeing them thrive and receiving their love, respect and gratitude.

A woman makes this supreme sacrifice to only one man who will cherish her and provide for his family. Men instinctively want to fulfill this responsibility. This is the essence of the heterosexual contract (i.e. marriage): female power in exchange for male power expressed as love. Sex is the symbol of this exclusive bond. Marriage and family may not be for everyone but it is the natural path for most.

Feminism has trained women to reject this model as “an old fashioned, oppressive stereotype” even though it reflects their natural instincts. A British writer reported overhearing two young women:

“All men are useless these days,” one said. “Yeah,” said the other. “The trouble is that they haven’t risen to the challenge of feminism. They don’t understand that we need them to be more masculine, and instead they have just copped out.”

That’s their logic? If women are less feminine, men will be more masculine? Men aren’t designed to fight with women. They need to be affirmed by a woman’s acquiescence and faith. When women constantly challenge them, men will “cop out” of marriage and family.

Now that love and marriage have been “discredited,” women have nothing left to exchange for love but sex. Thus, many are unnaturally obsessed with appearance and pathetically give their bodies to all and sundry.

Permanent love is not based on a woman’s sex appeal, or personality or achievements. Ultimately, it is based on self-sacrifice. We love the people who love us.

THE BIG PICTURE: THE CENTRAL BANKERS

People do not realize that feminism is mass indoctrination because they cannot identify the perpetrator, the means or the motive. Aaron Russo, the producer of Bette Midler’s movies and “America: From Freedom to Fascism” identified all three confirming what I have been saying.

While trying to recruit Russo for the CFR, Nicholas Rockefeller told him that his family foundation created women’s liberation using mass media control as part of a long-term plan to enslave humanity. He admitted they want to “chip us.” Google “Rockefeller Foundation” and “Women’s Studies” and you’ll get a half million citations.

The hidden goal of feminism is to destroy the family, which interferes with state brainwashing of the young. Side benefits include depopulation and widening the tax base. Displacing men in the role of providers also destabilizes the family.

A drastic paradigm shift is required to make sense of the world. The Rockefellers are part of the private world central banking cartel that also controls media, defence, pharmaceutical and other cartels. To protect their monopoly of credit and wealth, they are instituting a world police state (“world government”) using the bogus 9-11 attack and endless war as a pretext. Rockefeller told Russo about this plan a year before 9-11.

Modern Western culture is Masonic. Freemasonry teaches that man and not God determines reality. (Naturally, they need to overrule natural and spiritual laws in order to assert their own control.) They have noticed that people are diffident malleable creatures who prefer to believe what they are told than trust their own reason or perception. Thus, for example, the media successfully promotes homosexual values that conflict with our moral or natural instincts.

Every facet of the mass media (movies, TV, magazines, music, commercials, news) is used for indoctrination and social control with the ultimate goal of enslavement. There is a connection between what happened in Communist Russia and what is happening in America today. In both cases, the central banking cartel is asserting its totalitarian control.

In order to destroy the family, the media convinced women that they could not rely on the heterosexual contract.

Myrna Blyth was the editor in chief of Ladies Home Journal from 1981 to 2002. In her book “Spin Sisters” (2004) she says the media sold women “a career in exactly the same drum banging way that the Happy Homemaker had been…sold to their mothers.” (38)

Thus many women are schizophrenic as they attempt to reconcile their natural instincts with constant exhortations to do the opposite. The wreckage — broken families and dysfunctional people — is strewn everywhere.

At the same time, Playboy Magazine etc. aimed a similar message at men. You don’t need to get married to have sex. Marriage and children are a bore.

This consistent media drumbeat is organized brainwashing. Society has been totally subverted by the central banking cartel, using a Satanic cult, Freemasonry as its primary instrument. Most masons are unaware of the truth but the owners of the mass media certainly are.

We used to say, “as American as motherhood and apple pie.” Only Satanists would trash motherhood. Far from empowering women, feminism has unsexed many. It has deprived them of a secure and valued social role and reduced them to sex objects and replaceable workers.

Satanists promote rebellion because they are defying what is natural and conducive to happiness. Like their symbol, Lucifer, they wish to play God.

God’s love can be seen in a woman’s dedication to her husband and children. Thus the bankers must destroy it.

Jonas E. Alexis: In his study Libido Dominandi: Sexual Liberation and Political Control, E. Michael Jones produces a plethora of scholarly evidence showing how the Rockefellers essentially destroyed the social fabric of society by advocating population control. What they probably didn’t realize is that they were invariably killing their own children by doing so. Libido Dominandi is indeed a great read.