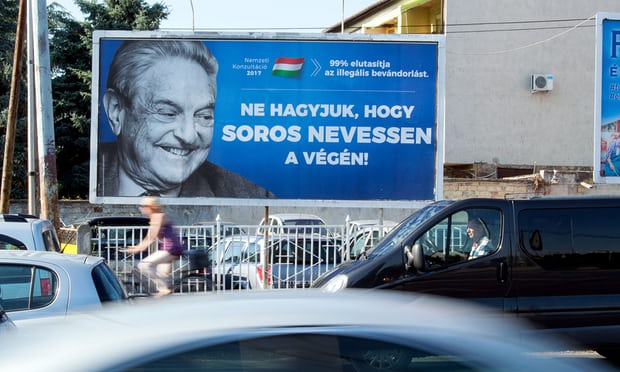 I see that Hungarian Jews are up in arms over the Government’s anti-Soros poster campaign. The country’s largest Jewish organisation has called on Victor Orban to stop the campaign claiming that the “poisonous messages harm the whole of Hungary”. Meanwhile Israel’s ambassador in Budapest also criticised the poster campaign, saying it “evokes sad memories but also sows hatred and fear” while Georgi himself lamented the ‘clear anti-Semitism’ of the posters.

Which is a bit odd considering that the message simply says  “Don’t let Soros have the last laugh“.  What’s anti-Semitic about that…..even if the demon’s Satanic visage is featured prominently? Well we’re talking about Hungarians here, and probably more than any other people Hungarians understand the Tribe.

After all they’ve experienced Jewish Government twice in the first half of the 20th century. The (((Bela Kun))) regime after WWI lasted a mere four months but in that time turned the country on its head even to the point of starting border wars with some of its neighbours. Its Culture Minister (((Georg Lukacs))) tried to de-Christianize the country. Reasoning that if Christian sexual ethics could be undermined among children, then both the hated patriarchal family and the Church would be dealt a crippling blow. He launched a radical sex education program in the schools. Sex lectures were organised and literature handed out which graphically instructed youth in ‘free love’ while simultaneously encouraging them to deride and reject Christian moral ethics, monogamy, and parental and church authority. All of this was accompanied by a reign of cultural terror perpetrated against parents, priests, and dissenters. You don’t have to be paranoid to realise that the same thing has been going on in a more insidious form in all White countries for the last fifty years.

And the Tribe took over again after WW II under Soviet direction. This time even though they were more circumspect they still pissed off Hungarian goys who rose in a violent rebellion in 1956 which was eventually quashed by Soviet troops. Many of the rebels fled to the West where their anti-Semitism was studied by psychiatrists and sociologists in the way scientists would examine malignant bacteria in a petrie dish. The following from David Irving’s Insurrection (he had not yet become red-pilled).

To a significant extent the refugees interviewed after the uprising were anti-Jewish. The basic revulsion was not hard to find beneath the cultural veneer of even the demurest refugees. Sometimes the sociologists had to probe a little
deeper, but the worm was always there, waiting to be hooked out and displayed wriggling on the analyst’s notepad.

Thus on February 5th, 1957, at Cornell University, psychiatrist Dr. Richard M. Stephenson interviewed young Erika Szalay, a religious and attractive girl. “All the key jobs were held by Jews,” said Erika. “I used to wonder why Catholics and Lutherans couldn’t get these jobs. There were lots of Jews in Pápa, but none of them did physical labour and none of their wives worked either.The leaders of these co-operatives were always Cohens and Schwarzes.”

Questioned as to whether he knew of any Jewish workers on the shop floor of his medical supplies factory [another refugee] replied: “No. The Jews always worked in the office.” The American analyst glanced up questioningly at him and saw “pogroms in his eyes”, as he vividly phrased it in his report. The man confirmed his definition: “I hate their guts!”

Oy vey, the sufferink! And speaking of sufferink it should be noted that the two regimes in question were overthrown only with great bloodshed.