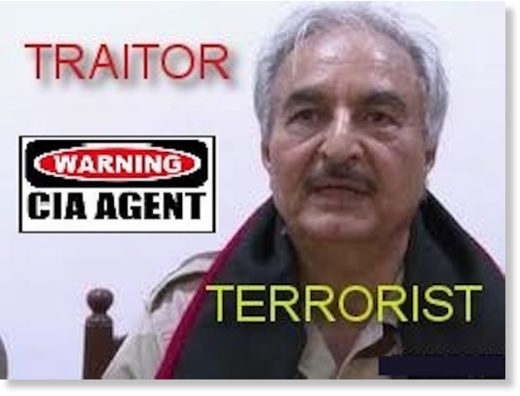 This is a report direct from an Libyan spy deep inside the Muslim Brotherhood terrorist organization in Egypt.

He reports the following:

First: The bombing of the Mosque in Egypt last week was directly related to the Libyan Khalifa Haftar, the so called General that is a CIA Operative. According to the intel – Khalifa Haftar is working to bring about more destabilization of the MENA region. He gets his instructions direct from the CIA and has been working with them since the 1970’s. He has been taking orders, getting funding, weapons and other aid directly from the CIA since he was dropped into Libya to lead the mercenaries (radical Islamists) put into Libya by NATO, Hillary Clinton, Obama, Sarkozy, Qatar and Saudi Arabia in 2011.

Second: The psyop (fake) report about slave trading in Libya is directly related to Khalifa Haftar. Haftar continues his work to destabilize Libya by working with the mercenaries, radical Islamists and Libyan rats that joined NATO to destroy Libya by illegal force. These puppets and mercenaries occupying Libya now are losing their hold. The great tribes of Libya are moving ahead with great strides to cleanse their country of these thieves, murderers and terrorists. The prize offered to Haftar by the CIA (and his long time dream) is to be placed as dictator of Libya. This would give the CIA control of Libya.

The Libyan people are not fooled, they know who Haftar is, they know his so called war against the radicals is a lie. Haftar is losing and this makes him quite desperate and dangerous. The Libyan spy warns all Libyans, please very careful these days – until Haftar is gone out of Libya, he will continue his crimes against the people and there is no limit to what he will do.

This report has been confirmed as correct by many of my contacts in the Egyptian Tribes. They offer this to me because the Libyan tribes are not able to bring forward this intel due to safety reasons.