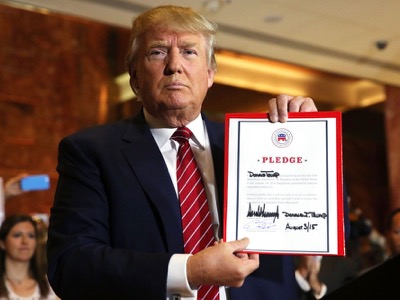 It would be a serious error to judge President Trump by the criteria of the Washington ruling class, ignoring the History and the culture of the United States. It would also be an error to interpret his actions from the point of view of European thought. Indeed, his defence of the right to bear arms or the racist demonstrations in Charlottesville have nothing to with support for extremists, but exclusively the promotion of the Bill of Rights. Thierry Meyssan explains the train of thought that he represents, and draws up an assessment of his highly important economic, political and military realisations. He also questions the limits of US political thought and the risks of dismantling the « American Empire ».

It is now a year since President Trump took office in the White House. It is becoming possible to discern his political ambitions, despite the destructive confrontation in the US between his partisans and his adversaries, detrimental to all.

The facts are all the more difficult to establish since Donald Trump himself masks his principal realisations behind a flood of contradictory declarations and Tweets, and his opposition presents him, via their own medias, as a lunatic.

Before anything else, the division of the United States has never been so pronounced since the Civil War. Both camps demonstrate great violence, and for certain of the protagonists, total dishonesty. In order to understand what is happening, we must first set aside the brutal exchanges between the two sides, and identify what each side represents.

The United States were created both by the « Pilgrim Fathers », in other words the Puritans of the Mayflower, whose arrival is celebrated during « Thanksgiving », together with a crowd of migrants from Northern Europe.

The former were no more than a tiny group, but they had a religious and political project. Their aim was to establish a « New Jerusalem », organised according to the Law of Moses, and to strive for purity. At the same time, they intended to pursue the confrontation between the English and Spanish Empires in the Americas. As for the latter, they sought to find fortune in a land they believed was empty, without inhabitants, without any constraint, and with no more than local government. As a whole, these two groups are described by sociologists as the White Anglo-Saxon Protestants (WASPs).

When the Constitution was being drawn up, the « Founding Fathers » mostly represented the Puritans. Under the influence of Alexander Hamilton, they imagined an anti-democratic text which reproduced the system of the British monarchy, but transferred power from the gentry to the local elites, the governors. This text sparked fury among the North-European migrants, who had given their lives during the War of Independence. Rather than re-writing the Constitution and recognising popular sovereignty, a dozen amendments were added by James Madison, the result constituting the Bill of Rights. These additions guaranteed citizens the right to defend themselves in court against the « Reason of State ». Both of these texts remained valid for two centuries, and gave satisfaction to both groups.

On 13 September 2001, Congress adopted, in haste, an extremely voluminous anti-terrorist Code, the USA Patriot Act. This document, which had been prepared in secret for many years before the attacks on New York and Washington, suspended the Bill of Rights in all circumstances connected to terrorism. From then on, the United States of Republican George Bush Jr. (himself a direct descendant of one of the Puritans of the Mayflower) and Democrat Barack Obama, were governed exclusively according to modern Puritan principles (which now include multiculturalism, distinct rights for each community, and an implicit hierarchy between these communities).

Donald Trump presented himself as the candidate of the North Europeans, in other words, the non-Puritan WASPs. He based his electoral campaign on his promise to give them back their country, which had been confiscated by the Puritans and invaded by Hispanics who refused to integrate their culture. His slogan America First! must be understood as the restoring of the « American Dream », that of finding fortune, at once against the Puritan imperialist project and against the illusion of multiculturalism.

The defence of the Bill of Rights includes the right to demonstrate, including for extremist groups (1st amendment) and that of the citizens to bear arms in order to resist possible excesses of the Federal State (2nd amendment). It is therefore perfectly legitimate for President Trump to have supported the right to demonstrate for the racist groups in Charlottesville, and to have expressed his support for the National Rifle Association (NRA). This political philosophy may seem absurd to non-US citizens, but it nonetheless corresponds to the History and the culture of this country.

The two main powers of a US President are:

the nomination of thousands of senior civil servants;

the determination of military objectives.

But it so happens that Donald Trump has only a few dozen loyal supporters with whom to fill these thousands of posts, and the Pentagon already has its own strategic doctrine. Trump therefore has to ascertain the decisions which are capable of swinging the system, and concentrate on them.

Since his arrival at the White House, he has been acting effectively to

develop the economy and inhibit finance;

dismantle the « American Empire» and restore the Republic, which is to say General Interest;

defend the identity of the WASPs, and expel Hispanics who refuse to integrate US culture.

So, Donald Trump has just nominated Jerome Powell at the head of the Federal Reserve Bank. For the first time, the President of this institution will not be an economist, but a lawyer. His function will be to put an end to monetarist policy and the rules which have been current since the defeat of the US in Vietnam and the end of the convertibility of the dollar into gold. He will have to create new rules which will put capital back in the service of production instead of speculation.

Donald Trump’s fiscal reform should eliminate all sorts of exonerations and cause company taxes to fall from 35% to 22%, even 20%. Experts are divided as to which social classes this change will benefit. The only certainty is that, when linked with Customs reform, it will cause many delocalised jobs to lose their cost-effectiveness and quickly lead to the repatriation of a number of industries.

On the international level, he has put a stop to the recruitment of new jihadists and the support that was provided to them by many States – the exceptions are still the United Kingdom, Qatar and Malaya, who continue this policy. However, he has not ended the implication of transnational companies and international senior civil servants in the organisation and financing of jihadism.

Rather than dissolve NATO, as he had initially envisaged, he has transformed it by imposing the abandon of the use of terrorism as a method of war, and forcing NATO to become itself an anti-terrorist alliance.

Donald Trump has also withdrawn the United States from the Transpacific Treaty which was designed to counter China. In a gesture of thanks, Beijing has considerably reduced its Customs costs, which demonstrates that it is possible to replace the previous antagonism between States with cooperation.

As for internal affairs, President Trump has nominated Judge Neil Gorsuch to the Supreme Court, which is the instance charged with exploring the interpretation of the Constitution, including the Bill of Rights. He is a magistrate well known for his studies on the original meaning of these texts, and as such, is capable of re-establishing the compromise at the heart of the creation of the United States.

However, although this assessment is very satisfactory for the electors of President Trump, it is still too soon to know whether it will facilitate the integration of non-WASPs or, on the contrary, provoke their expulsion from the national community. According to the Mexican geopolitician Alfredo Jalife-Rahme, two thirds of the Hispanics in the US who do not speak English live in California, an old Mexican territory. It could be tempting for Donald Trump to solve this cultural and demographic problem by favouring the secession of this State – « Cal-Exit ». In this case, the White House would have to deal with the problems posed by the loss of the show business industry in Hollywood, the software in Silicon Valley and above all, the military base in San Diego. The operation led by the White House and its agencies against Hollywood during the Weinstein scandal seems to indicate that the process is already under way.

The secession of California could begin an ethnic dismantling of the United States until it retreats back to the initial territory of the 13 States which adopted the Constitution, including the Bill of Rights. In any case, this is the long-held hypothesis put forward by Russian geopolitician Igor Panarin.