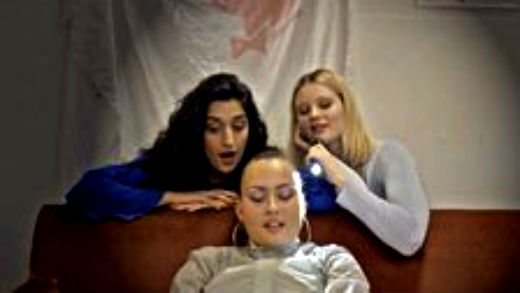 I have an international job which gives me the opportunity to regularly escape the mental asylum that Sweden has become. I hope to be able to warn the rest of the world for how liberal thoughts can totally annihilate a people the way that it has in Sweden. For the good of the rest of the world I recommend that you intellectually fence off the mental asylum still called Sweden and don´t let any of the insane ideas, or persons, escape to poison your people or country.

I have for a few years now driven the Youtube channel Granskning Sverige (Review Sweden) where our team try to expose the insanity that prevails in Sweden. By introducing questions into the debate that at first might seem stupid to the average brainwashed Swede. However, as they try to answer the “stupid” question they are forced to think outside the box and hopefully realize that it is their own concept of normal that has been completely corrupted by decades of evil propaganda.

My colleague and I have asked ourselves: how come Swedes have become one of the most thoroughly brainwashed people of the world? We are of differing opinions as to why but I will here try to give a few examples, along with my personal thoughts on why Sweden is in such a rush to self-annihilate.

Sex: Sweden is known for its sexual liberty and equality. Anyone can have sex with anyone as long as all involved voluntarily take part and no one comes to harm. Since there is no concept of the soul, or sin, in Sweden there are no arguments against taking part of sinful behaviours that are clearly damaging to the soul. Putting limits to sexual liberation or behaviour is considered conservative, extremist, or right out evil. Having sex with someone has transformed from being the manifestation of love and marriage to an activity no more meaningful than playing tennis. No moral inhibitions should be placed on the activity of having sex in Sweden. Children in school are even taught about the mechanics of having sex.

But if there are no moral limits to sexual behaviour, and we live in a society where challenging moral limits and social norms is the only acceptable attitude, where do we end up?

I´ll tell you where you end up: In Sweden. One of the countries with the most rapes per capita in the world. A country with an explosion of mental ill-health (official PDF document confirms as much) amongst young women and children. This is because we have, through sexual liberation and so called equality, stripped our women of true femininity. The oxymoron of “women has to be liberated from their homes/kitchens” has been bought, hook sink and rod, by the brainwashed Swede.

What kind of sick view does the average Swede have of their home if it is something you need to be liberated from? The evil elite have introduced the concept of competition and struggle for power between the two components of society that is the last place there should be any competition: between man and woman. I would not be completely surprised if in the future the brainwashed Swedes start talking about the problem of parental oppression of children and how children need to be liberated from their homes and families.

In a sane society the man will sacrifice his life for his (yes his) woman, and the woman should be honoured by that potential sacrifice. At the same time women should be honoured for their higher value to society than men. It is for good reasons women and children shall be the first entering the lifeboats from a sinking ship. Men are expendables when it really comes down to business. That´s why it is against all logic to have women on potentially life threatening positions in society. Not in insane Sweden though. Here it is a woman right to risk her life as a soldier, fire-fighter, or police. A woman in a sane society does not have to prove herself, she just needs to be a woman. That intrinsic value of being a woman is stripped from the Swedish feminist activists. According to their discourse, the feminist needs to take up the struggle against the men in the patriarchy. They thereby become individuals stripped of their feminine values. The feminists are therefore totally uninteresting for real men. – I am not going to sacrifice my life to someone who does not appreciate it and who even see my potential sacrifice as a sign of oppression. In effect, feminism weakens a nation and saps people’s will to survive. Swedes do not fight anymore, we just watch our women being raped by non-Swedes and do nothing about it.

In Swedish society the woman needs to prove her value by her economic performance in competition with men. The value she gives society through her mere existence and potential of giving love, is totally ignored in the mental asylum called Sweden. As a result, more and more women are either on anti-depressants or going off the rails mentally.

An example of totally insane women in Sweden, cheered on as interesting artists by the evil state television, are Maja Malou Lyse and Aravida Byström depicted in the culture-program Kobra and girlgaze (see link below). Instead of giving treatment to these insane women who takes pictures of their own vagina, or even inside their vagina, and display it to the world, they are presented as interesting artists that are challenging the male control of the concept of what it means to be a woman, or how a woman should be depicted. They are taking control over the image of women in society.

Well they are at least showing that insanity has been normalized in Sweden, but they drown in the clutter of other utter insanities the mental asylum of Sweden is producing.

Another result of the “challenge the norm”-norm in Sweden, which by the way is part of the education curriculum where the children are being taught “norm critical thinking”, is the Liberal Youth, who really takes insanity to more sinister levels.

The Liberal Youth in Sweden decided on a congress, that they would actively work for legalizing necrophilia and sex between siblings. This is in other words the democratic outcome of a vote amongst a large number of young Liberal Swedes, and not the idea of the odd insane person who happens to be member of the Young Liberal party. So as I said: fence Sweden off for your own protection.

The above are just a few examples, even though they might be amongst the most appalling. I could go on for days taking up new examples, but let us consider why this is happening to Sweden.

This is a result of living in a society that prides itself of having no moral boundaries and where “challenging the norm” is the only acceptable norm. As humans we have been awarded with a sense of moral which is in our soul. It has been awarded us by God, and we have to cultivate and nurture this by adhering to Gods words and commandments. We need to, on a daily basis, reflect on what is good and what is bad. On what grounds is something good or bad? As a former atheist I have come to the conclusion that the ultimate judgement on whether something is good or bad must lay in the hand of God. I have therefore converted and am now a traditional catholic. To explain this choice probably requires a book, but to be open with the reader I here state the grounds for my moral judgement. I believe that even atheists understand that without the moral guide that the church previously provided society, we are actually on a slippery slope when it comes to morals. In the case of Sweden, it is more like having run off a cliff. Without any moral guidelines we will end up with a society that celebrates degeneracy and where nothing can be condemned on objective moral grounds.

God is by the vast majority in Sweden long forgotten and has been replaced by a number of nonsensical words and ideas. To be a good person in Sweden you need to stand up for “Everybody´s equal value”, and for the “open tolerant and inclusive society”. These are concepts that are pounded into the heads of every Swede by every function of society from the very start of their life outside family; a part of life which often starts at the age of one in insane Sweden. Women in insane Sweden needs to get back to work as quickly as possible after giving birth, and are expected to hand over what is most precious in their lives to the state for an institutionalised upbringing in the standardized day care system. A system which is free from religion by state edicts.

As a result depression amongst mothers and children is widespread in Sweden. To have children who are growing up, deprived of the contact with their mothers, taught that their existence is just a coincidence, and that there is no purpose with their lives, does not quite seem to be a recipe for happiness. The only thing that makes them good persons is if they are standing up to the previous stated nonsensical concepts.

If we are tolerant with no limits and no exceptions, there is actually nothing which we do not accept. Being limitlessly tolerant means that we are standing up for nothing. In other words, we are actually inviting the devil in to our society. The devil is in the process of destroying Sweden.

Link to the program, and the ”best” part is actually in English since one of the women is Danish. https://www.svtplay.se/video/16154259/kobra/kobra-sasong-20-girlgaze?start=auto&tab=2017