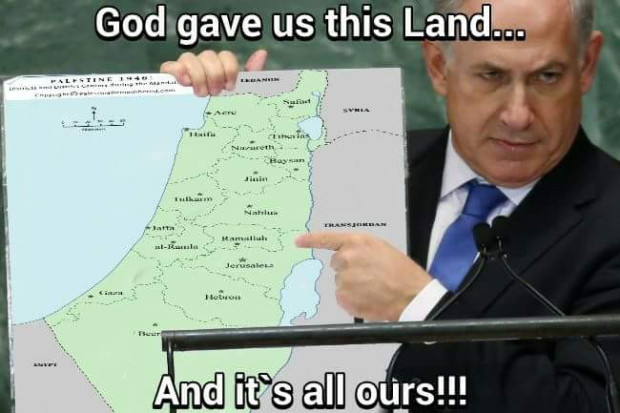 ‘This is Jewish land. Palestine isn’t even an Arabic word!’

ed note–yes, I know it sounds like the typical Jrivel that–almost as much as the laws governing gravity itself–must inevitably spew forth from the mouth of someone suffering from the effects of Jtosis, the mental illness that attends any and all prolonged and severe exposure to Judaism.

But there are actually very, very important implications associated with this that stand to mal-effect every single human being living on God’s green earth. When powerful Jews utilize language such as this, they are not just giving speeches that carry no long-term or far-reaching geo-political dominoes.

Presently, there is a new Caesar who has ascended the throne in Rome named Donald J. Trump who has stated–both plainly and often–that he intends to see the situation in the Middle East resolved. Not because he is a ‘Christian’, not because he is a ‘nice guy’, but rather, because at this crucial juncture, it is as much in America’s interest to see this done as it is in someone’s interest whose house is on fire to call the fire department.

The Jews–as they are fond of reminding everyone on a regular basis–are an ‘eternal people’ with ‘eternal ideas’, one of those ideas being the creation of a Jewish state between the Nile and Euphrates rivers as outlined many times in the Torah, to wit–

‘On that day the LORD made a covenant with Abraham, saying “To your descendants I give this land, from the river of Egypt to the great river Euphrates”…–Genesis, 15:18

‘And God spoke unto us saying, ‘Go to the hill-country and all the places nigh thereunto… in the Arabah, the hill-country and in the Lowland… in the South and by the sea-shore, the land of the Canaanites, and Lebanon, as far as the great river, the river Euphrates…Go in therefore and possess the land which the Lord swore unto your fathers, to Abraham, Isaac, and Jacob, unto them and to their seed after them…’ Deuteronomy 1:6–8

‘Every place whereon the sole of your foot shall tread shall be yours, from the wilderness, and Lebanon, from the river Euphrates, even unto the hinder sea shall be your border…’ Deuteronomy 11:24

This being the case, any ‘peace deal’ that does not incorporate the ‘eternal ideas’ of Judaism vis a vis the creation of a Jewish state encompassing almost the entirety of the Middle East is completely unacceptable, as Jews believe that their racist, petty, vindictive god, Yahweh, will–if his commandments are not fulfilled to the LETTER of the law–unleash a heaping, healthy dose of holy hell upon the world, and certainly the creation of a ‘Palestinian state’ in this regard would constitute the exact type of infraction that Klein & co are talking about.

In short, Judea, Inc is not going to sit idly by and allow this new Caesar to impose today’s version of Pax Romana on the Middle East again, as took place 2,000 years ago, and if this means that he has to be assassinated or that a new war has to be started in bringing this about, then as far as Klein & co–acting as the agents of their racist, petty, vindictive god Yahweh are concerned,

‘Thy kingdom come, thy will be done, on earth as it is in heaven.’

“This was never their sovereign land,” said Klein. “And if it was their sovereign land, how could it be that they would have named it ‘Palestine’ – a Roman name, not an Arab name? We [the ZOA] are the only significant organization making it clear to Congress and the media and in public speeches that there is no ‘occupation’. This is holy Jewish land, it has never been sovereign Arab land.”

In addition, Klein noted, Israel has withdrawn from nearly all Arab population centers in Judea, Samaria, and Gaza, granting autonomy to the overwhelming majority, 98%, of Arabs in those areas.

“There are many falsehoods in the world being perpetrated against Israel. I’ll only mention one – besides Apartheid and that Jerusalem is holy to Muslims, a total falsehood – this nonsense of ‘occupation’. Is there really an ‘occupation’ now?”

“Israel has given away all of Gaza, 40% of Judea and Samaria. That’s where 98% of the Palestinians live. They have their own parliament, schools, textbooks, newspapers, radio stations, TV, businesses, police force. There is no ‘occupation’.”

Klein touted his organization’s credentials as the only “organization today of significance that opposes a Palestinian terror state,” and that “opposes any more unilateral concessions to [PA chief Mahmoud] Abbas and his racist, bigoted, Jew-hating terrorists. No more concessions!”

Founded in 1897 as the Federation of American Zionists, the ZOA has some 25,000 members.