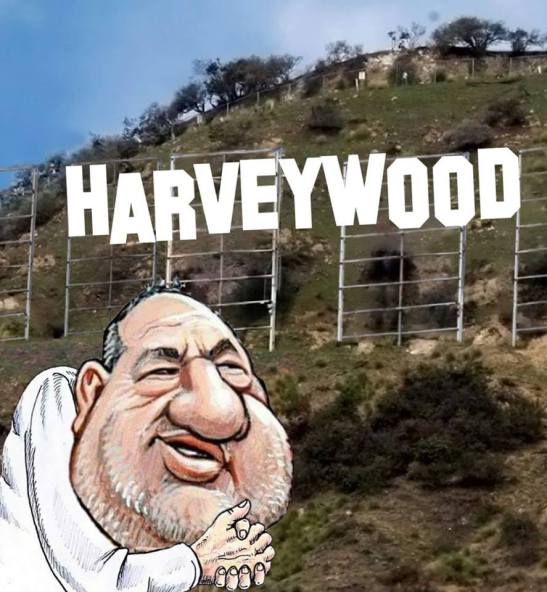 Since initial report on Hollywood producer, number of figures in entertainment and media facing similar allegations continues to grow

ed note–over half the people listed on this are Jewish, and not by coincidence.

All can rest assured that this great bloodletting was not some form of ‘spontaneous combustion’, a quirk or that Hollywood suddenly ‘got Jesus’. Someone put this into motion, and we can all just forget about the notion that it was organized Jewish interests themselves who did this, as they stand everything to lose and nothing whatsoever to gain.

So the obvious and relative question at this point is, cui bono? Who gains from this, and, just as importantly, who has the resources at his disposal to force the JMSM’s hand in exposing all this?

Well, probably the guy who has been under siege from day one when he announced his intention to run for the presidency and who has stated over and over again his plans for freeing America from present course that can only end in her demise. This is the guy who announced in the aftermath of Hurricane Harvey that the name ‘Harvey’ ‘sounds like such an innocent name,’ but that it wasn’t ‘innocent’, who assembled all his top military leaders and announced that it was the ‘calm before the storm’ and who now has announced that he and his team are nearing completion of their own ‘final solution’ to the problem existing in the Middle East between Israel and those unfortunate Gentiles forced to live in her close proximity.

Some may have grown weary hearing all the lurid details concerning the various perverts, rapists, etc in Hollywood, but in general, people are missing the point to all of this. It is not about sex crimes, but rather about setting the stage for the implosion of a nest of spies, murderers, assassins, and extortionists who are every bit as dangerous to America and the world as AIPAC, the ADL, the Federal Reserve, etc.

Since The New York Times published allegations of sexual harassment and assault against Hollywood mogul Harvey Weinstein in October, multiple men in Hollywood and media have faced allegations ranging from sexual misconduct to rape. A look at some of the men accused:

— Producer Harvey Weinstein— Accused by dozens of women of sexual harassment or assault. Fired by The Weinstein Co. and expelled from various professional guilds. Under investigation by police departments in New York, London, Beverly Hills and Los Angeles. He denies all allegations of non-consensual sex.

— Actor Kevin Spacey — Accused by at least 14 men of sexual misconduct or assault. London police reportedly investigating a sexual assault. Fired from ‘House of Cards’ and replaced in Ridley Scott’s completed film ‘All the Money in the World.’ His former publicist has said he is seeking unspecified treatment.

— Filmmaker Brett Ratner — Accused by at least six women of sexual harassment. Playboy shelved projects with Ratner and Ratner stepped away from Warner Bros. related activities. He denies the allegations.

— Actor Steven Seagal — Accused by two women of rape. He denies the allegations.

— Comedian Louis C.K. — Accused by five women of sexual misconduct. Planned release of film “I Love You, Daddy” halted. Netflix special canceled. He says the allegations are true and has apologized.

— Actor Ed Westwick — Accused by two women of sexual assault. The BBC pulled an Agatha Christie adaptation from its television schedule and halted production on a second sitcom starring the “Gossip Girl” actor. Los Angeles police are investigating. He denies the allegations.

— Actor Dustin Hoffman — Accused by woman of sexual harassing when she was 17. He has apologized for his behavior.

— “Mad Men” creator Matthew Weiner — Accused by one woman of sexual harassment. He denies the allegation.

— Actor Robert Knepper — Accused by one woman of sexual assault. He denies the allegations.

— Writer-director James Toback — Accused by hundreds of women of sexual harassment. Beverly Hills police investigating complaints. He has denied the allegations to the Los Angeles Times.

— Director-producer Gary Goddard — Accused by one man of sexually molesting him at age 12. He was unavailable to immediately respond.

— Producer Chris Savino— Accused of harassing up to 12 women. Fired from Nickelodeon. He has apologized for his behavior.

— Amazon executive Roy Price — Accused by one woman of sexual harassment. He resigned from Amazon.

— Journalist Mark Halperin — Accused of harassing about 12 women while at ABC News. Book contract terminated. Fired from job at NBC News. He has denied some of the allegations.

— New Republic editor Leon Wieseltier — Accused of sexually harassing numerous women. Removed from the masthead of The Atlantic magazine. He has apologized for his behavior.

— NPR news chief Michael Oreskes — Accused of inappropriate behavior or sexual harassment by at least four women while at The New York Times, NPR and The Associated Press. He has been ousted from NPR.

— Rolling Stone publisher Jann Wenner — Accused by one man of sexual harassment. He says he did not intend to make the accuser uncomfortable.

— Billboard magazine executive Stephen Blackwell — Accused of sexual harassment by one woman. He has resigned from the magazine.

— Artforum publisher Knight Landesman — Accused by multiple women of sexual harassment and sued by one woman. He has resigned from the magazine.

— Celebrity chef John Besh — Accused by 25 women of sexual harassment. He has stepped down from the company he founded.