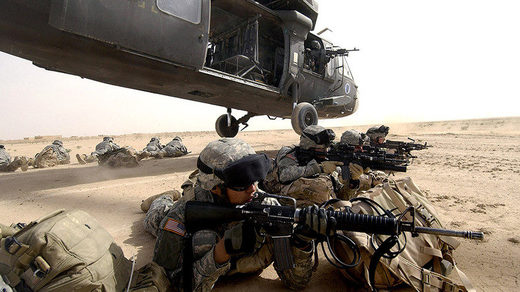 The ‘War on Terror’ has cost US taxpayers at least $1.46 trillion since September 11, 2001, the Department of Defense’s cost of war report has revealed.

The 74-page DoD dossier was obtained by the Federation of American Scientists’ Secrecy News. It breaks down the cost of the US’s various conflicts and reveals the ongoing war in Afghanistan and the war in Iraq account for the greatest chunk of change.

Operation Enduring Freedom (the name given to the ‘War on Terror’ between 2001 and 2014), Operation Iraqi Freedom (Iraq War) and Operation New Dawn (past operations in Iraq and Afghanistan in 2010 and 2011) made up the biggest expense. They cost a combined $1.315 trillion.

Current military operations cost $147.6 billion. This includes $102.9 billion for Operation Freedom’s Sentinel, the name given to the ‘War on Terror’ by Barack Obama at the end of 2014, and Operation Inherent Resolve, the US’s operations against ISIS in Iraq and Syria which started in 2014, and has cost $17.1 billion.

The report only includes direct war-related expenses, such as equipment, operating bases, training, paying troops as well as the costs related to feeding, housing and transporting them.

COSTS OF WAR NOT INCLUDED

The numbers don’t include veterans’ expenses, or the amount racked up by intelligence agencies in their war on terror. The numbers also don’t take into account the cost involved in rebuilding and post-conflict programs.

The Veterans Benefits Administration’s latest annual report found 1,060,408 veterans are receiving benefits, at an average of $15,907 each per year.

Veterans of the War on Terror’s benefits’ are costing $16.8 billion a year, and 1 million are receiving benefits at the moment.

According to a 2011 Harvard Kennedy School study, Afghanistan and Iraq veterans’ benefits were estimated to cost between $600 billion and $1.3 billion over 40 years.

The report found that $31.3 billion had been spent in the 10 years since 2001 on medical care and disability for almost 500,000 vets. It also found that Afghanistan and Iraq veterans were applying for benefits at far greater rates than previous wars.

The report found the “cost of caring for war veterans rises for several decades and peaks in 30-40 years or more after a conflict.”

The CIA’s classified operations, along with the NSA’s efforts to combat terrorism aren’t included in the total.

The report includes the total amount of funding given through war related-requests between 2001 and 2017, which is $1.7 billion and includes war spending, non-war spending on fuel and the cost of running the Noble Eagle base. It also includes an $83 billion in funds marked as “classified.”

US Intelligence agencies receive upwards of $66 billion budget to play with annually, a significant fraction of which goes to foreign operations.

Despite the staggering amount spent on defense, President Trump has promised to “rebuild” the military which he says is “depleted.” He proposeda $603 billion budget for defense spending in March.

Both the Senate and House of Representatives have voted to pass $696 billion and $696.6 billion defense budgets, respectively.