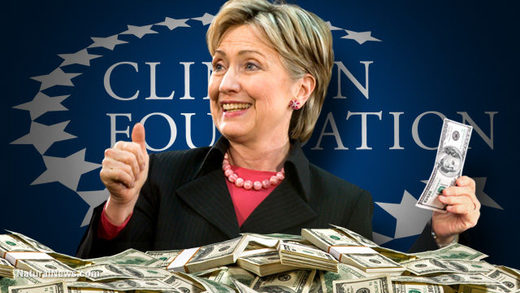 The Clinton Foundation’s finances are so messy that the nation’s most influential charity watchdog put it on its “watch list” of problematic nonprofits last month.

The Clinton family’s mega-charity took in more than $140 million in grants and pledges in 2013 but spent just $9 million on direct aid.

The group spent the bulk of its windfall on administration, travel, and salaries and bonuses, with the fattest payouts going to family friends.

“It seems like the Clinton Foundation operates as a slush fund for the Clintons,” said Bill Allison, a senior fellow at the Sunlight Foundation, a government watchdog group where progressive Democrat and Fordham Law professor Zephyr Teachout was once an organizing director.

Thanks to Charles Ortel, it’s time to prepare ourselves for some more Clinton Foundation revelations.

The Wall Street analyst who uncovered financial discrepancies at General Electric before its stock crashed in 2008 claims the Bill, Hillary, and Chelsea Clinton Foundation has a number of irregularities in its tax records and could be violating state laws.

Charles Ortel, a longtime financial adviser, said he has spent the past 15 months digging into the Clinton Foundation’s public records, federal and state-level tax filings, and donor disclosures.That includes records from the foundation’s many offshoots—including the Clinton Health Access Initiative and the Clinton Global Initiative—as well as its foreign subsidiaries.

This week, Ortel is starting to release his findings in the first of a series of up to 40 planned reports on his website. His allegation: “this is a charity fraud.”

The Sunday Times of London described Ortel as “one of the finest analysts of financial statements on the planet” in a 2009 story detailing the troubles at AIG.

“Where you or I see pages of numbers, [Ortel] sees a narrative,” wrote Sunday Times reporter Tim Rayment. “Sometimes the theme is a company’s potential for growth. Sometimes it is the prospect of self-destruction. And at times the story does not make sense, because the figures are hiding a fraud.”

Ortel turned his attention to the Clinton Foundation in February 2015. To learn more about the charity, he decided to take it apart and see how it worked.

“I decided, as I did with GE, let’s pick one that’s complicated,” said Ortel. “The Clinton Foundation is complicated, but it’s really very small compared to GE.”

When Ortel tried to match up the Clinton Foundation’s tax filings with the disclosure reports from its major donors, he said he started to find problems.

Last year, the Clinton Foundation was forced to issue corrected tax filings for several years to correct donation errors. But Ortel said many of the discrepancies remain.

A spokesperson for the Clinton Foundation did not comment on the claims.

I covered the Clinton Foundation and all its shadiness repeatedly last year. Here are a few highlights:

How the Clinton Foundation Paid Sidney Blumenthal $10K per Month as He Gave Horrible Libya Advice to the State Dept.

What Difference Does it Make? 1,100 Foreign Donors to Clinton Foundation Never Disclosed and Remain Secret

This is How Hillary Does Business – An Oil Company, Human Rights Abuses in Colombia and the Clinton Foundation