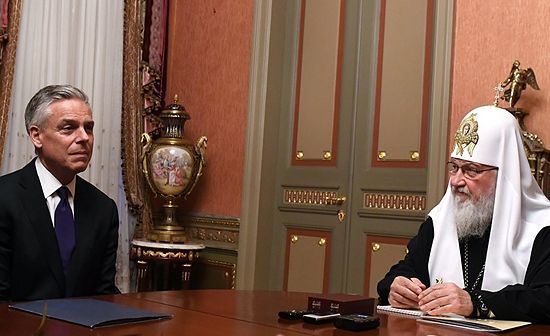 His Holiness Patriarch Kirill of Moscow and All Russia met with newly-appointed American ambassador to Russia John Huntsman at the patriarchal residence yesterday to discuss matters of relations between the two countries and of the fate of suffering Christians around the world, reportspatriarchia.ru.

Welcoming the guest, Pat. Kirill noted that the Russian Church has a special relationship to the United States, as great missionaries like St. Herman of Alaska and St. Innocent labored for years to bring the Orthodox faith to the American continent. “In addition to his missionary service, [St. Innocent] carried out a very important cultural work, creating an Aleut alphabet. The Russian Church spread to California from Alaska, and then to the eastern shore,” His Holiness told the ambassador.

The patriarch also spoke of St. Tikhon of Moscow’s missionary service in America, noting that this year marks the centenary of the restoration of the Russian patriarchate and St. Tikhon’s election to the position. “The works that he and his predecessors carried out on the American continent still live, and there exists today the Orthodox Church in America, which our Church granted autocephaly in 1970.”

The patriarch went on to note that the relationship between believers is one of the human heart, between diplomats—of the mind, and between businessmen—of the stomach. “I don’t think we should exclude the heart from international relations,” His Holiness emphasized.

In the patriarch’s view, as he told Ambassador Huntsman, today’s difficulties go beyond the mere relations between states, but involve the differences of values and the different understanding of values. He explained to the diplomat that during Soviet times, the persecuted Christians of Russia had more in common in terms of values with the sincere Christians in America than with the atheists among their fellow Russians. “Despite the atheistic propaganda in our country, the religiosity was always very high, and it was, I think, a wonderful basis for the development of relations between the new Russia and USA,” the primate stated.

However, what happened in the Soviet Union is now happening in America, as His Holiness observed. “The West is abandoning God, but Russia is not abandoning God, like the majority of people in the world. That means the distance between our values is increasing,” Pat. Kirill said. At the same time, he expressed the conviction that many Americans remain religious, and so the ongoing anti-religious processes are a big internal challenge for the U.S.

“We would very much like if we could look and find the right answers to the challenges of modern civilization along with the religious American people,” His Holiness assured the ambassador.

The pair also discussed the situations of Christians in Syria, Iraq, and the Middle East, the situation of refugees, and how to restore destroyed churches and monasteries. They also spoke of the situation in Ukraine and the peacekeeping role of the Ukrainian Orthodox Church.