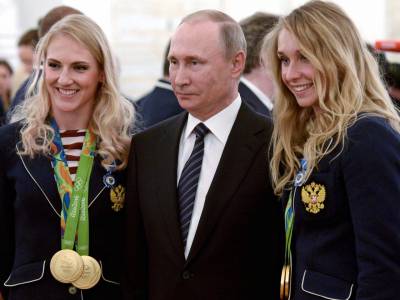 The Russian police have formally demanded the extradition from the US of Gregory Rodchenkov, a former director of the anti-doping centre.

Signs are emerging that there may be the influence of western intelligence involvement in his crimes. We aren’t talking about James Bond style theatrics, but the all too real subtle influence and subterfuge reminiscent of the KGB’s “active measures” employed during the First Cold War.

In a remarkable statement on camera a few days ago, Putin said he believes the Olympic doping scandals are being orchestrated by the CIA.

Specifically, he believes western corporate interests are lining up with governments to sow social conflict in Russia during the election season.

Here is what Putin had to say:

The Olympics will take place in February. And when do we have the presidential election? In March. So we seriously suspect that all of this is done intentionally.

Someone wants … to spread frustration with the fact that the state was allegedly involved in the violations and is responsible for this [doping scandels].

Today, international sports organizations, including the IOC, very much depend on … the controlling interest [of the] the United States.

That’s why we have a strong suspicion that in response to our alleged interference in their election, they want to create problems with the election of the Russian president.

It makes you wonder who is meddling in who’s elections, huh?

President Putin, himself a decorated field grade officer of the KGB appears to smell a rat. Check out this video from our Youtube Channel. (Full Transcript at the bottom of the article):

According to Svetlana Petrenko, an officer of the Investigative Committee, Russian authorities have sufficient evidence to charge Gregory Rodchenkov with the destruction of athletes doping tests and otherwise unethical and illegal misconduct in violation of World Anti-Doping Agency (WADA) on the storage and handling of such samples. A number of athletes and trainers have already testified against him.

Here is a report from the Russian evening news about the Committees’ findings and evidence against Rodchenkov (full transcript below the article):

According to the Investigative Committee, Rodchenkov together with Pro repeatedly called Maria Dikunets (who headed the anti-doping committee after Rodchenkov) and attempted to work out a deal with her under the table. In exchange for her giving him a database containing confidential information about the testing results of each athlete, they would offer her asylum or even citizenship in either the United States or Canada.

If this claim is true, it is highly suspicious and potentially very scandalous. Only the States in question have the power to grant asylum requests, let alone citizenship, so this leads to only two conclusions.

1: Rodchenkov and his associates are bluffing.

Although possible, one would think they wouldn’t make such an impossible and ridiculous promise, as no one would believe it. This would be as ridiculous as a minor Russian police officer promising a random western army janitor a position in the special forces if he defects. Such offers can only come from the higher echelons.

Therefore while the more likely conclusion is that Rodchenkov is merely making a desperate, pitiful bluff, there is a second possible conclusion.

2: Rodchenkov and his associates are acting under the direction of Western handlers who have permitted him to offer something as complicated as American or Canadian citizenship.

It’s not exactly something that random Russian criminals can grant. This seems to be the perspective President Putin has taken.

One would think they wouldn’t make such an offer if they didn’t believe they could follow up.

As ridiculous as it may sound that US or Canadian government agents would involve themselves in a scandal like this, one must not rule it out in today’s environment.

Now warfare is waged with computers, NGO’s are just as dangerous to a nation’s security as a mechanised regiment. We have seen all manner of dirty tricks being employed in this new Cold War.

We would be kidding ourselves if we didn’t think the ban of all Russian Olympians for doping-related issues not too long ago was not the direct result of western political pressure. Stranger things have happened.

In any event, Maria Dikunets did not believe their ridiculous request and reported them to Russian law enforcement allowing the police to record their subsequent conversations as evidence of conspiracy.

With charges formally raised along with an extradition request from the US, Russia is eagerly waiting the trail of Rodchenkov, Sobolevsky, and their associates.

Time will tell if the US will honour this request, or if the law is only enforced when it’s politically convenient.

Transcript of the First Video:

Also discussed were new attempts to discredit Russian athletes. According to Vladimir Putin, these attempts have political underpinnings.

In the city with strong sports traditions, Putin is asked to comment on the situation with doping scandals. What if the best Russian athletes really won’t be allowed to take part in the Winter Olympics in South Korea? Putin believes that Russia itself is interested in fighting doping, and it’s doing everything to make sports fair and clean. All scandals are provoked.

“I’m sure you know that the Olympics will take place in February. And when do we have the presidential election? In March. So we seriously suspect that all of this is done intentionally.

Someone wants to create a right atmosphere, to spread frustration among sports fans and athletes with the fact that the state was allegedly involved in the violations and is responsible for this.

Today, international sports organizations, including the IOC, very much depend on a lot of parties, first of all on sponsors, then also on television rights buyers, on advertisers, and so on. It’s a huge layer of links and connections. And the controlling interest is held by the United States.

That’s the base for the biggest companies paying for television rights, for major sponsors, for major advertisers, and so on.

That’s why we have a strong suspicion that in response to our alleged interference in their election, they want to create problems with the election of the Russian president. If that’s true, it’s very bad, because it undermines the whole purpose of the Olympic movement.”

Even the last scandal with doping tests, where the test tubes were allegedly damaged, was built on nothing, reminded Putin.

The laboratory in Lausanne officially accepted all the samples right after the Olympics in Sochi. And there were no objections at the time.

Transcript of the Second Video:

The Investigative Committee opened a criminal case against the former head of the Moscow Anti-Doping Laboratory, Grigory Rodchenkov. He is charged with obstructing the investigation and in the destruction of doping tests. Russia intends to extradite Rodchenkov, who has been living in the United States since 2015.

You can see his face more often now on the TV, his name is on the front pages of many newspapers.

The biggest sports denouncer Grigory Rodchenkov is interesting for the Western press again. Exactly with the same set of facts and arguments as last year, but is it enough for the conversation, in which the interlocutor has something to respond?

“The investigation interrogated more than 700 athletes, coaches, medical workers of the Russian national teams, sports federation staff, Center for Sports Training of the Russian National Teams, RUSADA and the Anti-Doping Center. But none of them confirmed the existence of a certain doping program.

If there were any violations of the anti-doping rules, they were of a purely individual nature.

As part of the investigative actions in the criminal case, the premises of the building were inspected which was used as an anti-doping laboratory during the Olympic Games. McLaren didn’t do this in the course of his investigation.”

Rodchenkov’s accusations sounded like a fantasy from the very beginning. Security chiefs serving the corrupt athletes, exchange of samples through а secret door right during а test, and, of course, famous doped-cocktails with whiskey for men, and with vermouth for women. This very information deprived us of the summer Olympics in Brazil, and now the winter Olympics is put in question.

“In fact, our athletes were convicted for the fact that after they passed tests, someone scratched something. This is speculation. There’s only one list of Rodchenkov that says that everyone took some soda with alcohol. This is nonsense based on the words of a person who has a motive for shaming the country, where he lived, and those people, the athletes with whom he worked.”

“Everyone’s fighting for him, everyone’s with him, he is in a state of shock, he was deprived of the most important thing he was striving for, prepared, dedicated the best years of his life, the Olympic Games.”

The text of the reasoning part of the decision is not available neither to the public, nor to the athletes themselves. It will be published in the near future, but the disciplinary commission of the IOC has something to conceal. However, some facts can be placed in one line. For example, on October 27 the commission of the University of Lausanne did not find traces of the opening of containers in the samples of Russians.

“They’re trying to blame us, by saying we had some kind of a state system of doping support, but it turns out the opposite: there was a man planted, who spoiled the samples of our athletes and for this reason, the Olympic Committee suspended our skiers today. Not because Legkov took dope, but because his test was opened but who opened it? We need to look at who benefits from this.”

By the way, we are not the only victim of such accusations. The media recently published an interview with a former doctor of the Chinese team.

All the medals of the 80’s and 90’s the Chinese won solely through stimulants.

The interview was taken by the journalists of the German ARD. The same as the first pseudo-exposures concerning Russia. But the dope did not become a new Klondike for the media market.

Ratings of the series “Icarus” with Grigory Rodchenkov in the lead role now are too low. And Hajo Seppelt’s tapes are just dusting in the archives. The spectator, like an athlete, prefers fair play to backstage intrigues.