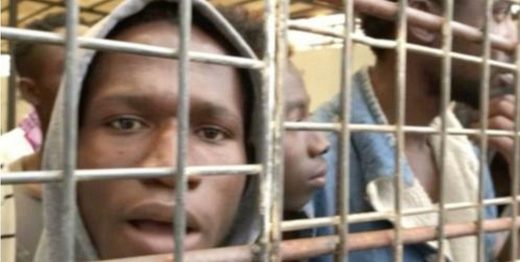 A new CNN investigation has uncovered a network of slave markets operating in warehouses in various cities across Libya six years after NATO-led intervention in the country toppled the government of Muammar Gaddafi in support of US and UK backed rebels. And not only did CNN confirm the presence of slave auctions where human beings are being sold for as little as $400 in “liberated” Libya, but CNN’s crew was actually able to film a live auction in progress, while also gathering the testimonies of multiple victims.

Though CNN’s footage and accompanying report is shocking, such practices have been quietly documented for years, and clear warnings were issued starting in early 2011 that Libya’s black as well as migrant population would be the first to fall victim at the hands of the Islamist Libyan rebels that NATO’s war empowered. From the outset critics of Western intervention in Libya loudly sounded the alarm of a genocide against black Libyans in progress committed by the very rebels the US, UK, France, and Gulf allies were arming – a fact so well-known that then Secretary of State Hillary Clinton was personally briefed and warned on the matter.

Among the foremost of these early critics at the time, Maximilian Forte, Associate Professor at Montreal’s Concordia University, published a 2012 book which exhaustively documented racially motivated crimes which came early and often during the armed uprising. His book, Slouching Towards Sirte: NATO’s War on Libya and Africa, contains essential summary context laying out the role that international media played in 2011 and after, including CNN itself, in fueling the xenophobic campaign to scapegoat Libya’s over one million strong black population as “pro-Gaddafi mercenaries”.

According to Professor Forte:

Racial fear and xenophobia were at the very crux of the first public calls for Western military intervention, and were the basis for the first utterance of the need for a “no-fly zone” … The myth of the “African mercenary” was useful for the Libyan opposition, the NTC [National Transitional Council] and the militias, to insist that this was a war between “Gaddafi and the Libyan people,” as if he had no domestic support at all…

As Patrick Cockburn explained, the insurgents’ “explanation for the large pro-Gaddafi forces was that they were all mercenaries, mostly from black Africa, whose only motive was money.”

Gaddafi’s ‘pan-Africanist’ policies such as aggressive support for the creation of the African Union (in 2002), and a relatively open immigration policy allowing for the influx of sub-Saharan African migrants to work on Gaddafi’s massive building projects, stirred resentment and discontent within broader Arab Libyan society in the decade leading up to the 2011 war. This was the historical background which set the stage for the anti-Gaddafi rebels’ extraordinary claim that sub-Saharan “foreign mercenaries” were being used en masse by Gaddafi to target protesters (later proven false).

And these historic ethnic and racial dynamics were well understood by the US government long before official support to Libyan militant groups began – militants which were not only shown to have al-Qaeda links, but which declared “open season” on all black Libyans and migrant workers during the revolution. As the CIA’s own historical analysis of Libya’s internal dynamics spells out:

QADHAFI in 1998 adopted a decade-long pan-African policy that enabled large numbers of sub-Saharan migrants to enter Libya without visas to work in the construction and agricultural industries. Although sub-Saharan Africans provided a cheap labor source, they were poorly treated and were subjected to periodic mass expulsions. By the mid-2000s, domestic animosity toward African migrants…

Similar to later developments in Syria, the media would uncritically echo whatever the “freedom fighting” rebels would feed it, thus this black foreign mercenary trope became an unquestioned reality spread from rebel propagandists to the Western public. Libyan opposition members even began claiming to be victims of wild attacks by roving bands of machete-wielding pro-Gaddafi blacks wearing tell-tale yellow hard hats – a symbol which also falsely began to be associated with “Gaddafi’s savage mercenaries” – resulting in subsequent mass arrests and executions of innocent black migrant construction workers.

The end result would of course be the widespread targeting and scapegoating of an entire ethnic population within Libya. This is demonstrated, for example, in the most well-known example of Tawergha, an entire town of 30,000 black and “dark-skinned” Libyans which vanished by August 2011 after its takeover by NATO-backed NTC Misratan brigades.

But it is important to remember that CNN itself at the time regularly promoted the false “black mercenary” narrative which helped fuel and excuse such atrocities, even though it is now much belatedly investigating and decrying Libya’s current migrant slave auctions, while leaving out the essential context which enabled such horrors in the first place. For example, the following February 2011 CNN reporting relied on unnamed opposition sources during the earliest days of the conflict to say:

Residents said hundreds of mercenaries from sub-Saharan Africa had been killed or captured while fighting for Gadhafi, but much of the army appears to have gone over to anti-government forces.

And a separate CNN article from the same month – though acknowledging that no CNN journalists were even inside the country – still uncritically reported:

Clashes broke out between a large crowd of demonstrators and people who appeared to be African mercenaries in the center of the city, according to an activist.

Yet another broadcast segment from February 2011 – the clip of which appears to have since been deleted from CNN’s site (but which is available on YouTube), asks the question: in Libya “just who is doing the dirty work?” – while answering that Gaddafi imported Chadian and Sudanese mercenaries to crack down on civilian protesters.

And those few examples are but a tiny sampling of CNN’s consistent spreading the dangerous myth throughout the early stages of the conflict – to say nothing of how ubiquitous the false rebel claims became among mainstream media generally.

One of the few international correspondents to actually report the truth in real time while writing from inside Libya was The Independent’s (UK) Patrick Cockburn. In an August 2011 story he wrote as if attempting to warn the world about the future war crimes to come at the hands of the US-backed rebels:

The rotting bodies of 30 men, almost all black and many handcuffed, slaughtered as they lay on stretchers and even in an ambulance in central Tripoli, are an ominous foretaste of what might be Libya’s future. The incoming regime makes pious statements about taking no revenge on pro-Gaddafi forces, but this stops short of protecting those who can be labelledmercenaries. Any Libyan with a black skin accused of fighting for the old regime may have a poor chance of survival.

If reporters like Cockburn and even prominent human rights organizations (see Human Rights Watch, September 2011, Libya: Stop Arbitrary Arrests of Black Africans) understood what was happening months prior to height of NATO’s military campaign in support of the rebels, which ended in the brutal torture and field execution of Gaddafi, then what did one of the prime US architects of the war, then Secretary of State Hillary Clinton know and when did she know it?

The answer lies in a March 27, 2011, intelligence brief on Libya published by WikiLeaks. The brief, which was made public in 2015 as part of a large batch of Hillary emails released by the State Department, was sent by long time close adviser to the Clinton family and Hillary’s personal intelligence gatherer, Sidney Blumenthal, and contains clear reference to rebels summarily executing “all foreign mercenaries” – which had already become the common euphemism for black Libyans then being targeted by the US-supported rebels.

Under attack from allied Air and Naval forces, the Libyan Army troops have begun to desert to the rebel side in increasing numbers. The rebels are making an effort to greet these troops as fellow Libyans, in an effort to encourage additional defections.

Source Comment: Speaking in strict confidence, one rebel commander stated that his troops continue to summarily execute all foreign mercenaries captured in the fighting…

And further interesting is that the line immediately following the acknowledgement of war crimes against “foreign mercenaries” indicates that a long time CIA supported Libyan exile was then taking command of the very militants committing those summary executions.

At the same time Colonel Khalifa Haftar has reportedly joined the rebel command structure, in an effort to help organization the rebel forces.

Khalifa Haftar has since 2011 become a mainstay in Libya’s post-Gaddafi chaos, heading up one of the three to four governments (at any given time) claiming authority in the war-torn country. Haftar has been widely acknowledged as the “CIA’s man” during his two decade long exile in the US, as a BBC profile explained: “His proximity to the CIA’s headquarters in Langley hinted at a close relationship with US intelligence services, who gave their backing to several attempts to assassinate Gaddafi.”

Meanwhile, Haftar is currently being eyed by international prosecutors for continuing to commit war crimes in Libya. One month ago The Guardian reported, “Ex-CIA asset Khalifa Haftar, due to meet Italian officials in Rome, ordered soldiers to kill prisoners, according to legal experts.” The Guardian cites video evidence which proves he continues to be “complicit in calling for extrajudicial killings.”

And yesterday Al Jazeera reported that a formal suit has been filed against Haftar at the International Criminal Court (ICC) for “carrying out mass executions and torture.” Another recent Guardian report which details torture and rape being carried out against prisoners held under Haftar’s militia alliance, includes the following eyewitness account of the torture of African migrant detainees: “There was a black man, a migrant. In the evening, they threw him into one of our cells: ‘You rape this guy, otherwise, you’re dead!'”

Then Secretary of State Clinton understood in early 2011 what was happening concerning the rebel genocidal targeting of black Libyans and African migrants, yet pushed to arm the rebels and overthrow Gaddafi anyway. She was given the intelligence brief which gave evidence this was happening on March 27, 2011. But even without such a classified intelligence report personally delivered to her, such war crimes were so well known that a full month prior on February 28, 2011, Al Jazeera could publish the following story entitled, African Migrants Targetted in Libya:

As nations evacuate their citizens from the violence gripping Libya, many African migrant workers are targeted because they are suspected of being mercenaries hired by Muammar Gaddafi, the Libyan leader.

Dozens of workers from sub-Saharan Africa are feared killed, and hundreds are in hiding, as angry mobs of anti-government protesters hunt down “black African mercenaries,” according to witnesses.

But even years later, as such race-based war crimes have now been exhaustively documented, Hillary has consistently indicated that she has no regrets. Though her beloved Libyan rebels, legitimized and empowered through broad support from the West, were literally killing people based on the color of their skin, not a single one has ever been convicted in a court of law or punished for their crimes.

Moreover, Hillary has never so much as hinted at the problem, though her public stature would allow her a world-wide platform to speak against atrocities at any time, possibly preventing further crimes. Instead, she has simply chosen to conclude her role in the tragic story of Libya with her crazed and gleeful declaration of “we came, we saw, he died.”