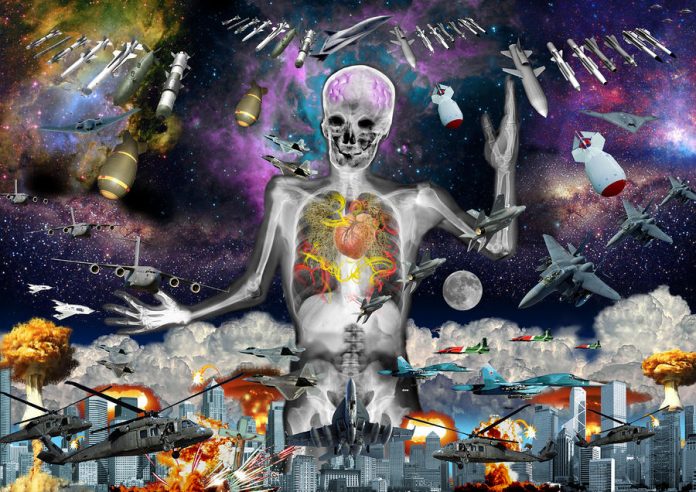 The Watson Institute of International and Public Affairs at Brown University has recently released a study which shows that the US military has already spent at least $5.6 trillion on perpetual wars and conflicts in the Middle East. That’s $23,000 for every single taxpayer in the country![1]

Imagine what America could have done with $5.6 trillion. And what has the Khazarian Bankster Cult offered in return? Next to nothing. In fact, they want more wars, more blood, and more deaths for Israel. They event want a bloody war with North Korea. In an article entitled, “Meet the Jew who may bomb North Korea,” Mrdechai Sones of Israel National News writes this of Head of US Air Force General David Goldfein:

“Of all the Jews in the world, the one who controls the greatest firepower is not necessarily Binyamin Netanyahu or the current commander of Israel’s Air Force. It appears the distinction is held by the Chief of Staff of the US Air Force, General David Goldfein…

“The United States media has been quoting Goldfein for the past 24 hours because US heavy bombers armed with nuclear warheads are preparing for a 24-hour alert on the backdrop of tensions with North Korea. This means that all 76 B52 planes will be ready to take off at any moment for bomb missions.”[2]

Perpetual wars and perpetual conflicts in the Middle East, as we have argued in the past, are the work of the Khazarian Bankster Cult. They want to bomb countries they do not like, and they always find a stupid excuse. For example, let’s take Michael Ledeen on Iran.

Ledeen is known for his book The Iranian Time Bomb: The Mullah Zealots’ Quest for Destruction. Ledeen is a former scholar at the American Enterprise Institute, a Neoconservative think tank where he worked with Richard Perle, and for over twenty-five years was actively involved in “the Jewish Institute of National Security Affairs (JINSA), an activist group that promotes a strategic alliance between the United States and Israel.”[3]Central to Ledeen’s thesis in The Iranian Time Bomb is that Iran is responsible for the 9/11 attack.

Not only that, Iran has always sought “to destroy or dominate” the United States![4]Moreover, for Ledeen, Iran is “the mother of modern terrorism.”[5]

Ledeen believes the best way to destroy “the mother of modern terrorism” is through war. In fact, Ledeen has been a proponent of the idea that peace can come through violent war. “I don’t know of a case in history where peace has been accomplished in any way other than one side winning a war [and] imposing terms on the other side.”[6]

Ledeen also maintains that Iran was the chief mine of terrorism, proven, says Ledeen, by court documents (even though he never tells where to find the court documents or what they actually said); in the same article, Ledeen even implied that the quicker the U.S. invaded Iran, the better.[7] By invading Iran, Ledeen argued, the U.S. would eventually bring down “the mullahcracy, for they will keep killing our people and our friends.”[8] It is not surprising that Ledeen has been described as “one of the most dishonest and ludicrous jokes on the political scene.”[9]

As the United States moved toward war against Iraq, Ledeen claimed that countries that did not fully support the United States were allying themselves with terrorism. “The Franco-German strategy was based on using Arab and Islamic extremism and terrorism as the weapon of choice, and the United Nations as the straitjacket for blocking a decisive response from the United States,” he wrote, claiming that both France and Germany should be treated as “strategic enemies.”[10] Not only that, he further stated that both France and Germany had “struck a deal with radical Islam and with radical Arabs.”

Although Ledeen admits that the theory “sounds fanciful, to be sure,” he was clear that if it happens to be correct, “we will have to pursue the war against terror far beyond the boundaries of the Middle East, into the heart of Western Europe. And there, as in the Middle East, our greatest weapons are political: the demonstrated desire for freedom of the peoples of the countries that oppose us.”[11]

In response to this, Jonah Goldberg proposed the “Leeden doctrine,” which simply is that “every ten years or so, the United States needs to pick up some small crappy little country and throw it against the wall, just to show the world we mean business.”[12]

Once again we are back to perpetual wars, not only in the Middle East, but wherever neoconservatives like Ledeen want them. As Ledeen himself declared, the level of casualties in the Iraq War are “secondary. It may sound like an odd thing to say. But all the great scholars who have studied American character have come to the conclusion that we are a warlike people and that we love war.”[13]

This is not the first time Ledeen had turned to blatant fabrication in order to promote an ideology—he was one of the people who promoted the falsehood that Saddam Hussein had bought uranium in Niger.[14]

Ledeen later denied any involvement in the matter. Neoconservatives such as Mark R. Levin have stood up for Ledeen, saying things like the “Left’s narrative” has produced a libelous accusation against Ledeen when he had nothing to do with the forgery.[15]

What the evidence has shown over the past decade is that the Khazarian cultists don’t care about America or any other country that shelters and nurtures them. You give them an inch, and they’ll take a mile. And whenever you resist, they call you name.

Americans and people of reason must challenge the Khazarian Bankster Cult, which is essentially Talmudic or satanic. The conflict of this age rests on those who accept this Talmudic ideology and those who don’t. Take your pick. To save America and much of the Western world, people of reason must purge this Khazarian Bankster Cult from the public square.