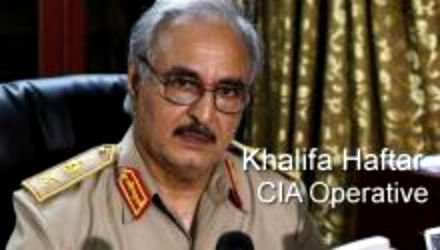 Khalifa Haftar, the would be Libyan General, is not all what he claims to be in the media.

Khalif Haftar is a TRAITOR, he is a WAR CRIMINAL he is a CIA operative and he is ambitious.

Khalifa Haftar was in the Libyan army under Ghadafi and took part in the Chadian wars of the 1970’s and 80’s. While fighting in Chad, when it appeared that Libya was going to lose the war, he decided to join the CIA and starting fighting against Libya, When it appeared that the war was ending, Ghadafi demanded that Haftar be returned to Libya but the CIA airlifted him to the US and installed him in Langley, VA as a CIA operative. He lived there in Langley quite comfortably on the backs of the US tax payers for over 20 years. During that time, Khalifa Haftar was tried for treason in Tripoli, in absentia, found guilty and sentenced to death.

But, Haftar had grand illusions to be the leader of Libya. So, he waited for his big break and it came in 2011 when the US/NATO created a false flag revolution to illegally overthrow the legitimate Libyan government.

Haftar was dropped into Libya by the CIA in 2011 to lead the so called “rebels” – 90% of which were radical mercenaries brought into Libya from other countries and 10% were Libyan criminal Islamic radicals who had either been imprisoned or had been living in exile because radical Islamist’s were outlawed in Libya.

After Haftar took part in the criminal destruction of Libya and the killing of hundreds of thousands of Libyans, he seemed to miraculously have some kind of “wake up” call that made him decide to act like he was now on the side of the legitimate Libyans against the radical militias and mercenaries who were holding Libya by force. Haftar then went about lobbying the HOR (House of Representatives) in Tobruk (the only elected government in Libya) to make him the leader of the Libyan army. Haftar is the only man would could actually get weapons into Libya (being CIA) as the UN holds an embargo against arming the Libyan army since 2011. Consequently, the Libyans were forced to make him the leader of the army or have no hope to cleanse their country of the radical mercenaries who were being armed daily by Turkey and Qatar. Even though he is the leader of the LNA, the Libyan people/tribes are not fooled by him, he has very little support in Libya and even less support in the army. His big claim of victories across Libya have all been accomplished by the Green Resistance, an underground pro Jamahiriya group actively fighting, doing the hard work but letting Haftar take the credit. The Libyans have learned the dirty game of the Khazarian Zionists, they know that Haftar is one of theirs and they will most likely leave Libya alone as long as their guy is out front.

Here is the question that begs to be answered…. How is it that Khalifa Haftar is able to jet set all around the world, promoting himself as the future leader of Libya, meanwhile inside Libya there is no money for medicine, food, electricity has no repair and constantly out, water supplies are tainted, and absolutely no infrastructure repair or maintenance at all. The answer to this question is very simple, Khalifa Haftar lives in the deep pockets of the CIA.

To add injury to insult, Haftar has a son that is guilty of bank robbery in Tripoli causing grave injury to some civilians. Haftar turned a blind eye to the crimes of his son and instead made him a leader in the army.

Currently, Haftar is in hot water for the tortuous death of 36 Libyans whose bodies were thrown on the ground outside of Benghazi. It was known that Haftar had been holding these men captive.

None of this has stopped Haftar’s dream to rule Libya. Just like Belhaj, he thinks he can put the Libyan people to sleep and they will forget his past of treason, terror and war crimes. To promote his delusion as the future ruler of Libya he has signed on with a group in Washington DC called “Grassroots Political Consulting LLC”. He hired this group for $20,000 per month for 6 months to promote him and sell the US Congress and Senate as the new ruler of Libya. (See copy of the contract at the bottom of this article) One has to wonder where he obtained this kind of money? I am pretty sure that in Libya no military officer is paid enough to afford this kind of expense. It is obvious that he believes if he sells himself to the US government then he has a good shot at ruling Libya. The truth is, he has no shot, there are a number of great military leaders in the tribes and he could easily be replaced. Haftar cannot make his past disappear, the Libyan people will never accept a traitor as their leader.

As a last piece of information, I would like to state that the information about Haftar online and in the media is greatly tainted in his favor. After all, the CIA is bound to keep their guy inside Libya. The Russian’s did meet Haftar and they met with some Misurata militias all hoping to gain their favor. What Russia told Misurata and Haftar was that there would be no agreements unless the tribes of Libya are involved in the process. Russia said it is the tribes of Libya that represent the people of Libya and they are the ones who will decide who their leaders will be not one man or one group of militias.

All the world knows Haftar is CIA and that makes him ineligible for leadership in Libya and actually ineligible to be a Libyan citizen. Remove the UN weapons sanctions from the Libyan National Army and Haftar will crawl back into the hole from which he came.