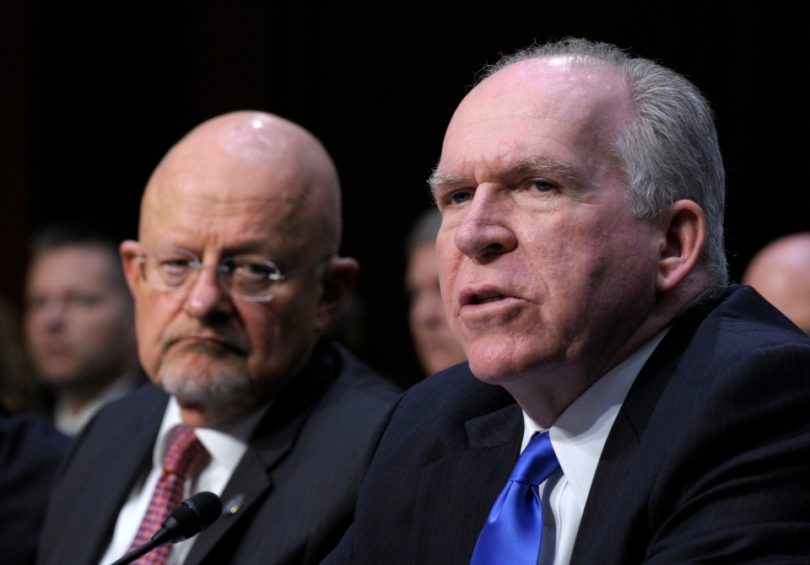 On Sunday, Former CIA Director John Brennan and Former National Intelligence Director (NID) James Clapper appeared on CNN’s morning talk show, State of the Union, to discuss Donald Trump’s brief meeting with Vladimir Putin in Vietnam. The two ex-Intel chiefs were sharply critical of Trump and wondered why the president did not “not acknowledge and embrace” the idea that Russia meddled in the 2016 elections. According to Brennan, Russia not only “poses a national security problem” for the US, but also “Putin is committed to undermining our system, our democracy, and our whole process.”

Naturally, CNN anchor, Jake Tapper, never challenged Brennan or Clapper on any of the many claims they made regarding Russia nor did he interrupt either man while they made, what appeared to be, carefully scripted remarks about Trump, Putin and the ongoing investigation.

There were no surprise announcements during the interview and neither Brennan or Clapper added anything new to the list of allegations that have been repeated ad nauseam in the media for the last year. The only time Tapper veered off course at all was when he asked Brennan whether he thought “any laws were broken by the Trump campaign? Here’s what Brennan said:

I’m just a former intelligence officer. I never had the responsibility for determining whether or not criminal actions were taken. But, since leaving office on the 20th of January, I think more and more of this iceberg is emerging above the surface of the water, some of the things that I knew about, but some of the things I didn’t know about, in terms of some of the social media efforts that Russia employed. So, I think what Bob Mueller, who, again, is another quintessential public servant, is doing is trying to get to the bottom of this. And I think we’re going to find out how large this iceberg really is.

In other words, after an arduous 12 month-long investigation involving both Houses of Congress, a Special Counsel, and a small army of high-paid Washington attorneys, the only straw Brennan has found to hold on to, is a few innocuous advertisements posted on Facebook and Twitter that had no noticeable impact on the election at all. That’s a very weak foundation upon which to build a case for foreign espionage or presidential collusion. It’s hard not to conclude that the public has been seriously misled by the leaders of this campaign.

The Intel bosses continue to believe that they can overcome the lack of evidence by repeating the same claims over and over again. The problem with this theory is that Brennan’s claims don’t match the findings of his own “Gold Standard” report, the so called Intelligence Community Assessment or ICA which was published on January 6, 2017 and which supposedly provides rock solid evidence of Russian meddling. The greatly over-hyped ICA proves nothing of the kind, in fact, the report features a sweeping disclaimer that cautions readers against drawing any rash conclusions from the analysts observations. Here’s the money-quote from the report:

Judgments are not intended to imply that we have proof that shows something to be a fact. Assessmets are based on collected information, which is often incomplete or fragmentary, as well as logic, argumentation, and precedents.

So, while Brennan continues to insist that the Kremlin was involved in the elections, his own analysts suggest that any such judgements should be taken with a very large grain of salt. Nothing is certain, information is “incomplete or fragmentary”, and the entire report is based on what-amounts-to ‘educated guesswork.’ Is Brennan confused about the report’s findings or is he deliberately trying to mislead the American people about its conclusions?

I think Mr. Trump knows that the intelligence agencies, specifically CIA, NSA and FBI, the ones that really have responsibility for counterintelligence and looking at what Russia does, it’s very clear that the Russians interfered in the election. And it’s still puzzling as to why Mr. Trump does not acknowledge that and embrace it, and also push back hard against Mr. Putin. The Russian threat to our democracy and our democratic foundations is real.

There appears to be a significant discrepancy between Brennan’s unshakable belief in Russian intervention and the findings of his own “hand picked” analysts who said with emphatic clarity:

Judgments are not intended to imply that we have proof that shows something to be a fact.

Why is it so hard for Brennan to wrap his mind around that simple, unambiguous statement?

The reason Brennan’s intelligence analysts admit that they have no proof, is because they have no proof. That might sound obvious, but we have to assume that it isn’t given that both Houses of Congress and a Special Counsel are still bogged down in an investigation that has yet to provide even a solid lead let alone any compelling evidence.

We also have to assume that most people do not understand that there is not sufficient evidence to justify the massive investigations that are currently underway. (What probable cause?) Adds placed in Facebook do not constitute hard evidence of foreign espionage or election rigging. They indicate the desperation of the people who are leading the investigation. The fact that serious people are even talking about social media just underscores the fact that the search for proof has produced nothing.

These investigations are taking place because powerful elites want to vilify an emerging geopolitical rival (Russia) and prevent Trump from normalizing relations with Moscow, not because there is any evidence of criminal wrongdoing. As the Intel analysts themselves acknowledge, there is no proof of criminal wrongdoing or any other wrongdoing for that matter. What there is, is a political agenda to discredit Trump and demonize Russia. That’s the fuel that is driving the present campaign.

Russia-gate is not about ‘meddling’, it’s about politics. And Brennan and Clapper are critical players in the current drama. They’re supposed to be the elder statesmen who selflessly defend the country from foreign threats. But are they or is this just role-playing that doesn’t square with what we already know about the two men? Here’s thumbnail sketch of Clapper written by former-CIA officer Ray McGovern that will help to clarify the point:

Clapper played a key role in the bogus Iraq-WMD intelligence when he was head of the National Geo-spatial Agency and hid the fact that there was zero evidence in satellite imagery of any weapons of mass destruction before the Iraq invasion. When no WMDs were found, Clapper told the media that he thought they were shipped off to Syria.

In 2013, Clapper perjured himself before Congress by denying NSA’s unconstitutional blanket surveillance of Americans. After evidence emerged revealing the falsity of Clapper’s testimony, he wrote a letter to Congress admitting, “My response was clearly erroneous – for which I apologize.” ….

Clapper also has demonstrated an ugly bias about Russians. On May 28, as a former DNI, Clapper explained Russian “interference” in the U.S. election to NBC’s Chuck Todd on May 28 with a tutorial on what everyone should know about “the historical practices of the Russians.” Clapper said, “the Russians, typically, are almost genetically driven to co-opt, penetrate, gain favor, whatever, which is a typical Russian technique.” (“Mocking Trump Doesn’t Prove Russia’s Guilt”, Ray McGovern, Consortium News)

So, Clapper concealed information that could have slowed or prevented the rush to war in Iraq. That’s a significant failing on his part that suggests either poor judgment or moral weakness. Which is it?

He also lied about spying on the American people. Why? Why would he do that? And why should we trust someone who not only spied on us but also paved the way to war in Iraq?

And the rap-sheet on Brennan is even worse than Clapper’s. Check out this blurb from Glenn Greenwald at The Guardian:

“Brennan, as a Bush-era CIA official, had expressly endorsed Bush’s programs of torture (other than waterboarding) and rendition and also was a vocal advocate of immunizing lawbreaking telecoms for their role in the illegal Bush NSA eavesdropping program……

Obama then appointed him as his top counter-terrorism adviser…. In that position, Brennan last year got caught outright lying when he claimed Obama’s drone program caused no civilian deaths in Pakistan over the prior year….

Brennan has also been in charge of many of Obama’s most controversial and radical policies, including “signature strikes” in Yemen – targeting people without even knowing who they are – and generally seizing the power to determine who will be marked for execution without any due process, oversight or transparency…..” (“John Brennan’s extremism and dishonesty rewarded with CIA Director nomination”, Glenn Greenwald, The Guardian)

So, Brennan supported kidnapping (rendition), torture (enhanced interrogation techniques) and targeted assassinations (drone attacks). And this is the man we are supposed to trust about Russia?

Keep in mind, the jihadist militants that have been tearing apart Syria for the last six years were armed and trained by the CIA. Brennan’s CIA.

These radical militias have been defeated largely due to Russian military intervention. Do you think that this defeat at the hands of Putin may have shaped Brennan’s attitude towards Russia?

Of course, it has. Brennan never makes any attempt to conceal his hatred for Putin or Russia.

As we noted earlier, Brennan and Clapper are central figures in the Russia-gate story, but their records show we can’t trust what they have to say. They are like the eyewitness in a murder trial whose testimony is ‘thrown out’ because he is exposed as a compulsive liar. The same rule applies to Clapper and Brennan, that is, when the main proponents of the Russia hacking story are shown to be untrustworthy, we must discount what they have to say.

Which is why the Russia-gate narrative is beginning to unravel.