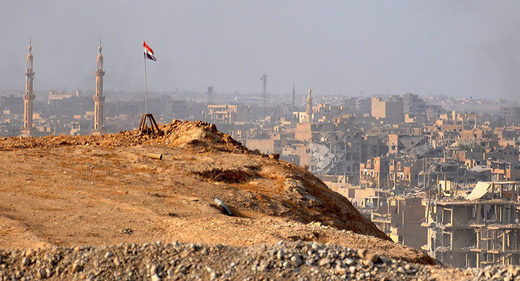 Syrian government forces with Russian aerial support have completely liberated the city of Deir ez-Zor, the last Daesh stronghold in the country, opening the final stage in the fight against the terrorist group.

Russian Deputy Defense Minister Alexander Fomin said Monday that in his opinion nobody questions the role of the Russian Aerospace Forces supporting Syria’s ground troops in the successes of the counter-terrorist fight. The offensive in southeastern Syria along the Euphrates River is the last thing left to do in fighting terrorism in the country, he added.

“Terrorists are resisting but their fate is sealed,” he told the Gazeta.ru portal.

Since the beginning of the conflict in Syria the country has been contaminated by landmines and explosive remnants of war thus one of the key tasks is to demine liberated territories.

Alexander Fomin noted that Serbia and Armenia had expressed readiness to send their experts to Syria for demining after the end of hostilities in the country.

“Demining could be called one of the most painful issues right now. We held consultations with representatives of defense agencies of Iran, Egypt, Serbia, Armenia, Turkey and the United Arab Emirates. Yerevan and Belgrade have already expressed their readiness to send their engineering divisions to Syria, Chinese sappers may follow suit. Some countries expressed readiness to provide financial assistance on this issue,” he said.

On Friday, the Syrian army announced it had cleared Deir ez-Zor, the biggest city in the country’s east, from Daesh militants, which means that the terrorist group has been left without control of an urban area anywhere in the Middle East. Liberation followed the lifting of the three-year-long siege of the city in September.

In the past several days Russia has been carrying out an aerial operation in Abu Kemal, the city in the province of Deir ez-Zor. On Friday six Kalibr long-range cruise missiles were launched from the Mediterranean Sea at Daesh positions in Abu Kemal. The Russian Defense Ministry has also opened a department of its reconciliation center in Deir ez-Zor and the officers are carrying out the monitoring of humanitarian situation on the left bank of Euphrates River. Active Russia’s support paves the way for new successes of the Syrian government army on the ground and anticipates near defeat of terrorist forces.