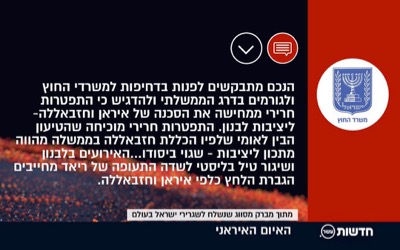 On Sunday 5 November 2017, Sayyed Hassan Nasrallah, speaking in a pre-recorded address, observed that it was incongruous for the Lebanese Prime Minister, Saad Hariri, to resign not from Lebanon, but from the Ritz-Carlton Hotel in Riyadh in the presence of “MBS”. He accused Saudi Arabia of interfering in Lebanon’s internal affairs.

On Monday 6 November, the Saudi Minister for Foreign Affairs, Adel Jubair, declared on CNN that the firing of a missile by Houthi rebels against Riyadh’s airport was an act of war. Then his no 2, the Minister of Gulf Affairs, Thamer al-Sabhan, speaking this time on Al-Arabiya, qualified Hassan Nasrallah’s speech as “a declaration of war against Saudi Arabia”.

According to the Israeli TV Channel 10, in the afternoon, the Netanyahu government addressed a cable to all ambassadors to ask them:

to lobby the government to which they are attached, to explain to it, Israel’s position on the resignation of the Lebanese Prime Minister Saad Hariri. Such an approach is very rare.

to support Saudi Arabia in its war against the Houthi rebels from Yemen and to declare that firing the missile at Riyadh airport calls for reinforcing pressure against Iran and Hezbollah.

In fact, the international press is treating Saad Hariri’s resignation as a matter quite separate from the Palace coup which followed at Riyadh. However, all elements revealed since then lead us to think that this resignation was only an element of the Palace coup and point to Hassan Nasrallah being right.

Israel is not envisaging attacking Hezbollah again since it is well aware of the military and diplomatic risks of such an operation. But Prime Minister Benjamin Netanyahu is pushing Saudi Arabia to attack the Lebanese resistance in its place and is preparing international public opinion for this.