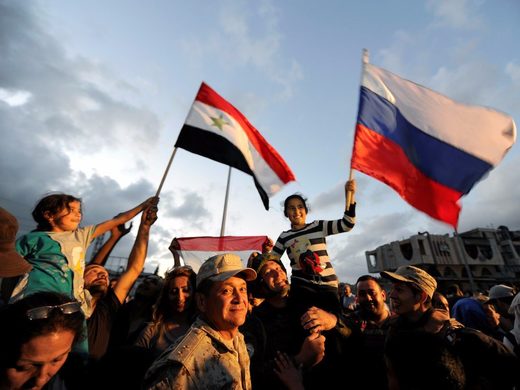 One week ago, the Iraqi Army and the PMUs reconquered al-Qaim, on their side of the border. Abu Mahdi al-Mohandes, the legendary PMU commander, previously had told a small group of us in Baghdad that would happen “in a matter of days”.

It ended up being four – to be exact.

The Syrian forces will now be redeployed northwest, towards Idlib, the last “moderate rebel” stronghold of that thing called Syrian Conquest Front, a.k.a. Nusra Front, a.k.a. al-Qaeda in Syria.

The key point is that Syrian and Iraqi forces have met at the border – with defeated Daesh jihadis scurrying around or turned into roadkill.

This is History in the making.

And right on cue, VIRTUALLY NOTHING about this REAL ON THE GROUND VICTORY OF A REAL WAR ON TERROR is being covered by Western corporate media.

No wonder. Because this was the work of Damascus, Russia, Hezbollah, Iran advisers, Baghdad and the PMUs – actually the “4+1” – and not the US-led “coalition” that includes Wahhabi mongrels House of Saud and UAE – that totally smashes to bits the monochord Washington narrative.

So History in the making must be silenced.

Of course Project Daesh of balkanizing “Syraq” is not dead.

The jihadi diaspora – across the desert, towards other fronts (Afghanistan, Philippines, the Caucasus) – is in effect.