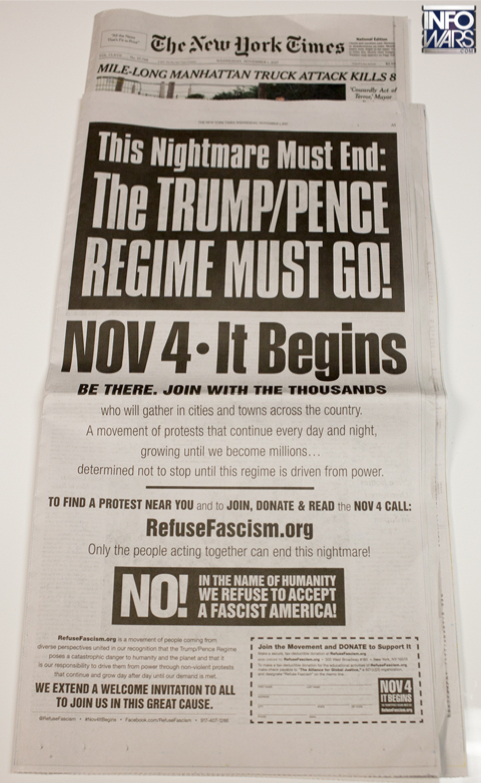 On Thursday, October 5th U.S. President Trump calmly stated before a White House dinner, “You guys know what this represents?” Trumped paused, “Maybe it’s the calm before the storm” he casually said.

A reporter then asked “What Storm?”

Trump replied, “We have the world’s great military people in this room I will tell you that”.

Trump’s cryptic message was the talk of both mainstream and alternative news. What exactly did he mean?

Was he referring to North Korea and Kim “Rocket Man” Jong-un, ISIS, Iran?

Well, it seems that certain events are now coming to the surface that may reveal just what Trump meant.

Zero Hedge reported last week “According to The National Association for Amateur Radio(ARRL), elements of the US Department of Defense (DOD) will simulate a “communications interoperability” training exercise across the United States on November 04-06. The announcement released on October 24 has not been widely distributed to the media because the drill is simulating a total grid collapse and could spark public fear.”

The article quotes the ARRL press release as saying “This exercise will begin with a national massive coronal mass ejection event which will impact the national power grid as well as all forms of traditional communication, including landline telephone, cell phone, satellite, and Internet connectivity.”

To make matters worse, George Soro’s communist fascist thugs ANTIFA is also having protests scheduled in several U.S. cities this weekend of the “solar storm” exercise. What a coincidence!

Information Clearing House reported Oct.30th: “US Masses Ships and Aircraft Outside North Korea” –this right after Trump signed an executive order allowing the US Air Force to recall as many as 1000 US Military pilots.

So what does this all mean? Is it possible that the “solar storm” exercise scheduled for this weekend will be a false flag event used as an excuse to fire upon North Korea, as well as, create massive chaos in the US and end the internet as we know it? The potential for a false flag during this exercise seems very plausible given the track record of so many past drills that suddenly “went live.”

Here’s something else, 2015’s X-Files revival season opener was a real eye-opener. In it, there was an Alex Jones type character that went on a diatribe about the secret government, FEMA camps, coming police state, corporate takeover of food, weather warfare, mass surveillance and eventual takeover of America “by a well-oiled and well-armed multinational group of elites that will cull, kill and subjugate.”

The character Tad O’Malley said “It’ll probably start on a Friday. The banks will announce a security action necessitating their computers to go offline all weekend.

Tad O’Malley: “What will seem like an attack on America by terrorists or Russia.”

This is a very revealing episode given that the X-files spin-off series“The Lone Gunman” had an episode where a plane tried to fly into the World Trade Center 9 months before 9/11.https://www.youtube.com/watch?v=9rsMG2hHsLo

As if this isn’t enough, Venezuela may default tomorrow.

Predictive Programming – 100 Reference before the Towers Came Down   YouTube

Add to all that: • Trump is out of the country this weekend, on the start of an unnecessary-looking Asian tour–a good time for “who knows” to take over the country during an emergency;

• Monday/Tuesday will mark the 100th anniversary of the Bolshevik (Rothschild) seizure of power; it was followed by the slaughter of millions;

• Dr. Lawrence Dunegan, in his famous 1988 account of the 1969 private talk by Dr. Richard Day, said the ultimate seizure of power would occur over a weekend; • Just for laughs, Daylight Savings Time kicks in this weekend, which seemingly no one has ever really understood, but does make the nightfall earlier. Bear in mind, innumerable doomsday predictions on the Internet have turned out to be nothing burgers. Nevertheless, I think it would be prudent to: stay vigilant; live upright; and pray for God’s mercy that this time will pass in peace. As the Orthodox Christians prayed during a Constantinople earthquake of 434 AD, based on a vision from heaven: “Holy God, Holy Mighty, Holy Immortal, have mercy on us.”