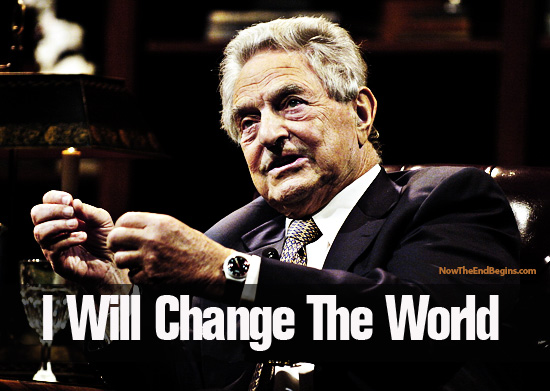 Many folks incorrectly believe that George Soros is a lone ranger out there doing his own “ordo ab chao” routine to recreate the world to his liking. That’s called playing God, incidentally, and it never ends well for the bad actors who try it.  Soros: Evil Economic Warlord, God Wannabe, Or Both?

That Soros is a criminally insane psychopath is not in dispute.  However, no one individual is ever permitted to inflict such profound and pervasive damage to Western civilization, which Soros has done for decades, unless they have been empowered to do so.  In other words, just like all the other nation builders and destroyers over the millennia, Soros has been enabled in all of his highly misguided enterprises.

The operative word here is “misguided”.  Because Soros has many causes and missions, all of which require vast amounts of funding, he was fastidiously cultivated to be a financier (one of many) for the New World Order agenda (NWO).  Toward that end, it is the Rothschild banking clan that deputized George Soros to be their chief bagman. The Inside Story on George Soros

Here’s how the Rohschilds set up Soros to be their financial hitman.  As one of “the world’s premier currency speculators”[1], Soros was provided insider information that allowed him to make a billion dollars by shorting the British pound in September 0f 1992.  Known as Black Wednesday, Soros is attributed with breaking the Bank of England with this single stroke of financial genius … … … genius that only the Rothschilds could confer upon him.

Let’s face it: no one loots the Bank of England and gets away with it; unless they are assigned the task.  In this way, Soros has been used by his masters (and there are many) to be the financial face of the cataclysmic NWO agenda.

As far as the other levels of leadership that stretch way above George Soros’s pay grade, they, too, use him to take full blame for so many misbegotten social engineering endeavors and catastrophic geopolitical ventures.  That’s why he set up the Quantum Fund in the first place; so that his coffers could be systematically filled.  The funds could then be disbursed to the many pet projects that Soros has established in the form of NGOs.  There are, in fact, so many Soros-funded NGOs that they are quite difficult to keep track of.  Which is why he recently did this: We mustn’t forget this wily and portentous move by George Soros!

In light of these self-evident revelations, the following simple exposé will be easy to understand.  It also explains why Soros Must Be Arrested, Prosecuted and Imprisoned to Prevent Civil War.

N.B. The following breakdown of George Soros’s MO was emailed to SOTN and is distinguished by its simple yet accurate analysis (which few have ever conducted).  The author deserves recognition for her keen sleuthing and penetrating insights.

This is short, right to the key point, 15 minute video.  Well worth your time to watch, and pass along to everyone you know.

Soros, a Hunagarian Jew, worked for the Nazi’s during WW2……never regretted that to this day.  Message?  No conscience.

Soros is a footman of the Rothschilds.  He was trained and financed and set up by the Rothschilds.  Rothschilds is the Puppet Master of Soros.
Initial meetings to create one currency in Europe were HELD ON QUEEN ELIZABETH 2’s Yacht in 1992.   Anyone see a connection here?   Yes, the Rothschilds and the Royals are thick as THIEVES! …. as in “same team”…..working together.  Of course they didn’t want the British Pound to be subject to their own manipulation nonsense, so they pulled the British Pound out of the Euro at the last minute.  But that was ALWAYS the plan.
Remember the “The sun never SET on the British Empire”!  That was the UK motto in the late 1800’s and going into the 1900’s.  Upset: WW2 President Roosevelt agreed to help out the beleaguered Brits against Hitler/Nazism, but ONLY on the Condition that the UK give up their EMPIRE (Colonialism for profit while enslaving third world countries).  OK, WW2 is won, everyone is happy,…….or…..are they?  UK, is smarting from the loss of free money from their enslaved nations.  Ouch.  WW2 victory, a bitter-sweet victory.
Fast forward to the above where the UK is deeply involved in FOISTING GLOBALISM upon the entire world, and GUESS who was PLANNED to be at the HEAD?  Yours truly, the UK Royal family.  Why the Brits still live under this archaic monarchy of completely dysfunctional psychopaths who believe the world really does belong to them, and to them alone, is beyond comprehension.  Yet the dumbed down Brits still bow and scrape to them.  That’s their problem, let’s not make it ours.  The UK wants the U.S. back again!  They still believe we belong them!  (Delusional, I know.)
Soros is a PAWN.  He represents the Bank of England, the Rothschild’s Central Bank!
So think about it.  Think about Soros funding Hellary, Obummer, and Antifa Civil Unrest…….and replace this pawn with the real face of WHO we have been really fighting: Rothschilds/UK Royal Family, who want to once again dominate the whole world.
Think about it, Soros is the one who has been destroying Western Civilization by importing Islamic maniacs still living in the 5th century into Europe.  Sweden is his poster child of national destruction.  Why?  Simple: age-old strategy “Divide and then conquer”.  Also known as Divide and Rule. Europe is a total mess right now, with their stupid sold-out globalist leaders selling them out left and right.  Create a mess and then offer to clean it up UNDER TOTAL CONTROL OF GLOBALIST LEADERS, GLOBALIST MILITARY, GLOBAL CURRENCY, etc.

I’m sure Trump knows  all this.  So when Trump leaks that next on the scaffolding is the U.S. Federal Reserve (The Rothschild’s Private Bank), he is also talking about the UK Royal Family being ousted, too.  These people are NOT going to go down without a fight.  So be prepared for anything, but know that Trump is on our side, he has successfully out-foxed the whole global elite thus far, I don’t think he would have allowed all these deliberate leaks to US, if he didn’t know that he was about to say “CHECKMATE”!  Game over, and We the People, Thanks to Trump and God, WON!
This is HISTORY in the making that we are witnessing right now!   Be prepared for all kinds of shenanigans until this is over, (it’s always darkest before the dawn) be careful, don’t put yourself at unnecessary risk, Cover the Trump Team in 24/7 Prayer and as we are encouraged to do, get out the popcorn and watch all this go down!
Who would have thought even 4 months ago we would ever see Hellary and McCain in GPS ankle bracelets this month?
Trump has out-foxed them all!  Well, he had help.  The U.S. Military Intelligence group were on to all the stuff years ago, that we are just finding out now.  They were waiting for the right time.  The Trump presidency was the lynchpin, the “change agent” and they have gone into play.
Popcorn anyone?
Deborah