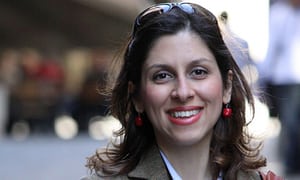 Britain appears to preparing to go out of its way to secure the release of Nazanin Zaghari-Ratcliff. The government has confirmed that it is considering granting diplomatic status to the duel national British-Iranian woman.

Meanwhile Foreign Secretary Boris Johnson has pledged to do his utmost to secure her release. While as detailed below, Britain is now preparing to pay a long-standing £450 debt to Iran as part of that effort.

The debt for British tanks, which were sold to Iran before the Islamic Revolution but never delivered, has been unpaid for nearly 40 years. Yet after nearly four decades, the British government seems ready to pay whatever is outstanding.

So Britain does indeed seem to be doing its utmost to secure Nazanin Zaghari-Ratcliff’s release, particularly after the British husband of the Iranian born woman claims his wife had been “traumatised” by her detention in an Iranian prison.

Why is the British government so keen to obtain her release?

We would suggest that Nazanin Zaghari-Ratcliff has indeed been “traumatised by her detention and that’s why the UK authorities seem so anxious to secure her release. However, we believe that they are not motivated by any genuine humanitarian concerns.

Instead, we suspect that Nazanin Zaghari-Ratcliff was employed by British Intelligence and after being traumatised through interrogation the British authorities fear she might start talking.

In other words she might soon reveal more about Western undercover operations in Iran, and that’s why Britain wants to get her out of Iran. Hence the flurry of efforts to get her released. Ed.

BRITAIN is preparing to pay a long-standing £450m debt to Iran that will help free imprisoned mum Nazanin Zaghari-Ratcliffe.

An international court ordered the UK to reimburse Teheran after the MoD reneged on a deal to sell Chieftain tanks to Iran in 1979, but still kept Iran’s cash.

As The Sun revealed yesterday, Iranian regime hardliners have told ministers they expect the debt to be settled as part of a shopping list of demands before Nazanin is freed.

Speaking after his first meeting with Boris, Mr Ratcliffe said the tank deal row: “It is important that the UK honours its international legal obligations so that Iran can honour its legal obligations.

“They are separate things, but it is good for the atmosphere if they are all served.”

Treasury and Foreign Office officials are working on a way around ongoing UN sanctions on military equipment, overseen by the EU, that currently forbid the payment.

The money is already being held by the High Court on behalf of the Government after the Hague’s Permanent Court of Arbitration ruled in favour of Iran in 2001.

But senior diplomats insisted last night the payment would not be a ransom bill, as ongoing talks with Teheran about it as entirely separate to efforts made to free Nazanin.

Mrs Zaghari-Ratcliffe has been locked up since April 2016 on trumped-up propaganda charges.

A government spokeswoman said: “This is a long-standing case and relates to contracts signed over 40 years ago with the pre-revolution Iranian regime.

“Funding to settle the debt was paid to the high court by the Treasury in 2002.

“It is wrong to link a completely separate debt issue with any other aspect of our bilateral relationship with Iran.”

Boris pledged to “leave no stone unturned” to free Nazanin as he met Mr Ratcliffe in the Foreign Office yesterday morning.

He agreed to consider giving her diplomatic protection status in a bid to demand her release.

The Foreign Secretary also pledged to look at Mr Ratcliffe’s second request, to be able to accompany Boris to Teheran next month.

Mr Ratcliffe – who has been denied a visa to see his wife and three-year-old daughter for the last 18 months – dubbed the meeting “positive and constructive”.

He also said he was no longer angry with Boris for saying Nazanin was in Iran to “train journalists” – a gaffe leaped on by Iran to slap an extra five years on her sentences.