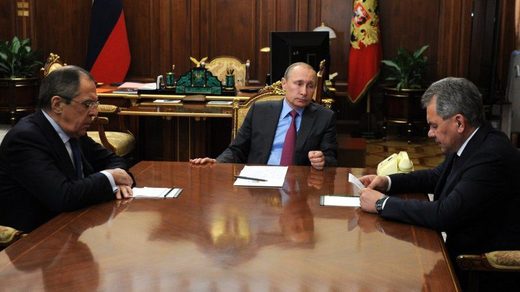 This is Russia’s strongest statement to-date, admonishing the illegal US presence in Syria.

Russia’s Foreign Minister Sergey Lavrov has slammed the US for its presence in Syria being not only illegal, but deeply counterproductive.

Lavrov also highlighted a statement from the Russian Defence Ministry which unequivocally accuses (with accompanying photographic evidence) the US of failing to target ISIS fighters in Syria while allowing them safe passage away from oncoming Syrian Arab Army liberators.

Syria has repeatedly stated, including at the United Nations, that US troops and airmen in Syria are not actually fighting ISIS but are merely playing an obstructionist role to the inevitable Syrian victory, one which includes the arming and financing of terrorist groups.

Russia’s latest statements back up these crucial long-time claims by Damascus.

A statement from the Russian Defence Ministry reads,

“The Abu Kamal liberation operation conducted by the Syrian government army with air cover by the Russian Aerospace Force at the end of the last week revealed facts of direct cooperation and support for ISIS terrorists by the US-led ‘international coalition.

The coalition’s aviation tried to create obstacles for the aircraft of the Russian Aerospace Forces in this area to safely shield militants of the Islamic State, who are leaving Abu Kamal, from the strikes of government forces. To this aim, the coalition’s attack aircraft entered the airspace over the 15-km zone around the city to hamper the Russian aircrafts’ mission.

There is indisputable evidence that the United States pretends it is waging irreconcilable struggle against international terrorism in front of the international community, while in reality it provides cover for the combat-ready Islamic State groups to let them regain strength, regroup themselves and advance US interests in the Middle East.

The Syrian troops’ rapid offensive in Abu Kamal has derailed the US plans to set up ‘pro-American’ authorities to govern the territories on the eastern bank of the Euphrates uncontrolled by the Syrian government”.

This is a clear indication from Russia that any previous unspoken “gentlemen’s agreement” between Moscow and Washington, to effectively allow the US and its Kurdish proxies to illegally occupy parts of Syria east of the River Euphrates, is effectively dead. As Syrian troops have destroyed the last bastions of ISIS in Syria, all of which are east of the Euphrates, Syria has shown that it is fully capable of exercising its legal prerogative to liberate what President Assad calls “every inch of Syria” and that Russia will continue to help Syria in the process.

The statement from Russia also indicates sympathy with the Turkish position, which is dead-set against any unilateral Kurdish occupation of Syria, even under US auspices. Yesterday’s meeting between Turkey’s President Erdogan and Russian President Putin appears to have confirmed Russia’s new supportive stance of the shared Syria, Iraqi, Iranian and Turkish position against Kurdish militants, often referred to as Kurdish terrorists.

Seeing as Kurdish forces in both Syria and Iraq have been exposed as being unable to defend their positions without the aid of the United States, the illegal US presence in Syria remains the biggest obstacle to the joint Arab-Turkish-Iranian position against Kurdish nationalism in the region. In Iraq, the US failed to aid their Kurdish allies, while in Syria the US continues to aid the Kurdish-led SDF militia, a group which Syria considers a terrorist organisation.

Sergey Lavrov has now joined Syria in offering a strong admonition of the US presence in Syria. Lavrov stated,

“If you look at who is the greatest danger, it’s just the wards of the United States, various foreign terrorists, militants who are attached to those groups of armed opposition that the US supports“.

“If we talk about the pro-Iranian forces, then some will be tempted to call the entire Syrian Army pro-Iranian. And then what? Will it have to surrender? This is what they call ‘wishful thinking’…

Lavrov added that the US has been failing to fight terrorists while helping ISIS and al-Qaeda fighters flee battle zones for a long time.

These strong words from Lavrov, combined with statements accusing the continued US presence in Syria of violating the Geneva Agreement, which the US recently affirmed its support for, is effectively a Russian call for an orderly US withdrawal from the Syrian Arab Republic. The broad points Russia makes are clear:

Russia has taken a decisive step in telling the US to quit Syria. It is the most strongly-worded statement against the US presence in Syria that Russia has offered to-date.

In spite of Turkey and Syria refraining from engaging in diplomatic relations, the de facto position of Syria, its Russian, Iranian, Iraqi allies andTurkey is now the same. The US stands alone in seeking to use its universally-reviled Kurdish proxies as a cover for what could be an attempt at a long-term illegal occupation of yet another sovereign Arab state. Russia, as the strongest partner of Syria, is now demanding a US withdrawal, in all but name.