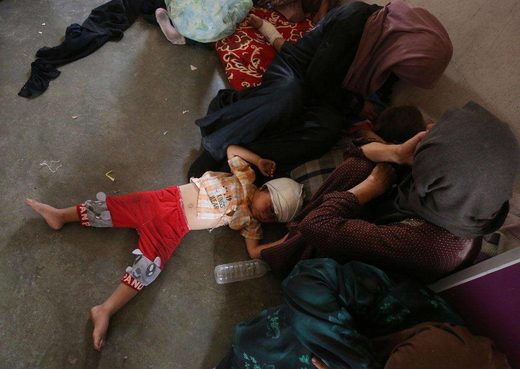 by Andrew Buncombe
The Independent

Sixteen years after Bush Snr launched his so-called ‘war on terror’ an untold number of civilians have been killed by disease, illness and by the US and UK-led military campaign

In February 2003, Elliott Abrams, a US official convicted of lying to Congress over the Iran-Contra affair but cleared by President George HW Bush, spoke to the media about the impending invasion of Iraq, ordered by Bush’s son.

Abrams claimed in his remarks about “humanitarian reconstruction” – six priorities had driven the planning. “The first is to try to minimise the displacement and the damage to the infrastructure and the disruption of services,” he said. “And the military campaign planning has had – has been tailored to try to do that, to try to minimise the impact on civilian populations.”

It didn’t turn out that way. Sixteen years after Bush launched his so-called “war on terror”, millions of people’s lives have been turned upside down, Isis has been allowed to fester and spread, and Iraq is a nation at risk of fracturing apart. Moreover, an untold number of innocent civilians have been killed – by disease, illness, in gruesome tortures performed by local and foreign insurgents, and by the US and UK-led military campaign that Abrams and others vowed would be surgical.

After nearly two years of reporting, "The Uncounted" is out today in the @NYTmag: https://t.co/vwDBIgCJiH pic.twitter.com/zICrFil30K

In recent days, the US has been again forced to address the painful issue of civilian casualties following the publication of a investigation by the New York Times, which found that, contrary to the claims of the Pentagon, as many as one-in-five coalition air strikes on Isis targets in Iraq in 2014, resulted in civilians deaths. That figure was 31 times higher than what the US has acknowledged.

The Pentagon has hit back at the report; it insists it takes great care in preparing for and carrying out military strikes, and investigates all claims of civilian casualties. It says it believes 786 civilians have been unintentionally killed by coalition strikes since the operations against Isis started in June 2014.

“The unfortunate death of civilians is a fact of war that weighs heavy on our hearts,” said Pentagon spokesman Eric Pahon.

Asked about the total of civilians killed since the 2003 invasion of Iraq, Pahon told The Independent he doubted he could provide such a figure. He referred inquiries to the Combined Joint Task Force Operation Inherent Resolve, the name of the operation against Isis. There was no immediate response.

The truth is that nobody knows how many civilians have been killed in Iraq since George W Bush and Tony Blair launched an invasion that was sold to the world, not as a means to simply topple Saddam Hussein, but to seize the weapons of mass destruction they claimed he had. That is one of its many enduring tragedies.

The militaries of both the US and Britain kept painstaking records of its soldiers killed in both Afghanistan and Iraq – 2,280 and 4,491 for the US, and 455 and 179 for Britain. Yet, they have never tried to make an overall tally of Iraqi civilian deaths or those killed in other theatres.

Over the years, there have been various attempts to come up with a figure. One of the first was the Iraq Body Count (IBC), a British project that maintained a tally of casualties based on media reports. Yet as the IBC has admitted, its figures are based on reports in the media, which were themselves limited in scope and detail.

Two reports conducted by the Johns Hopkins University’s Bloomberg School of Public Health, used extrapolation based on epidemiology, and were published in The Lancet. The first, published in 2004, estimated that at least 100,000 Iraqis had been killed as a result of the war.

"For the first time, U.S. Air Force F22A Raptors operated in Afghanistan, principally because of their ability to mitigate civilian casualties and inadvertent damage by employing small diameter bombs during U.S. airstrikes." https://t.co/Zp6RXB6OPI

The second, published in 2006, suggested the figure had risen to near 650,000. The British and US governments criticised the findings but those involved defended the methodology. In 2015, a report by Physicians for Social Responsibility suggested the total may have passed one million.

The truth of the matter is that nobody knows. The figure could be one million, it could be two million.

And when you add the civilian casualties in Afghanistan and other places where the “war on terror” has played out – Yemen, Pakistan, Mali, Niger, Somalia and the Philippines – it becomes even more of a guessing game. In many of these places, there are not even the rudimentary efforts, such as that attempted by the IBC.

One thing that is so striking about what was said in 2003 and what is being said now, is the language employed by US officials. Pahon, the Pentagon spokesman, stressed how everything was done to “limit harm to non-combatants and civilian infrastructure”.

Back in 2003, Abrams had vowed: “We hope to discourage population displacement through – partly through an information campaign, and partly by efforts to provide aid rapidly and restore public services rapidly.”

War has always been a dirty, dangerous business. People should not pretend otherwise.