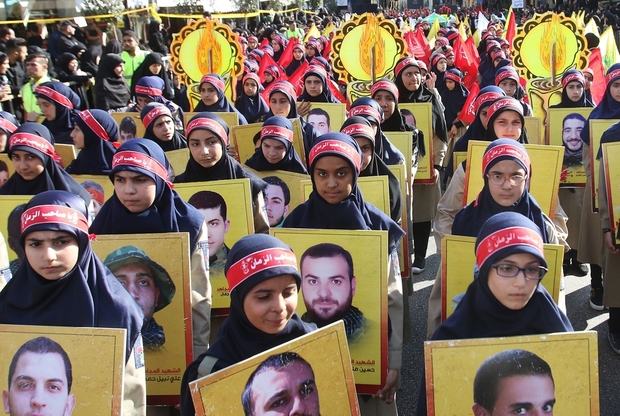 The group has gained extensive battlefield experience in Syria, and it says it is prepared for another war with Israel if necessary

It was formed as a resistance group against Israel, and operated on the country’s southern borders. But after years of war in Syria, hardened by battle experience and holding new territory, Hezbollah in 2017 is a wholly different beast.

The Lebanese Shia group’s victories in Syria have initiated a new era for its fighters in which they are not restricted by geography, but fight where they need to be, their leader has proclaimed.

“Everyone is dealing with Hezbollah as a regional power,” a Hezbollah political official who wished to remain anonymous told Middle East Eye.

Hezbollah, considered a terrorist organisation by Washington, has gained extensive battlefield experience in Syria, and it claims it is prepared for another war with Israel if necessary.

The official said the Iran-backed group’s “decisive and essential” role in Syria has turned it into a major military force in the Middle East.

“That was not our aim when we intervened in Syria,” he said. “All we wanted is to defend the resistance and defend a state that has stood by and supported the resistance since its inception in 1982 until now.

“The resistance” is what Hezbollah calls itself. The group was founded with Iranian help primarily to fight the Israeli army in Lebanon. But in Syria, it has taken on a new enemy – Syrian rebels, whom it accuses of being takfiris, a term referring to hardliners who proclaim other Muslims to be infidels.

Militarily, the political official said, Hezbollah acquired valuable fighting experience in war-torn Syria. The group has learned offensive tactics, whereas in past wars it had been arrayed mostly in a defensive posture against Israeli troops.

The organisation also fought on different types of terrain in Syria, a change from the hilly battlefield of south Lebanon.

“Now, we have fought in urban settings in al-Qusayr, in the mountains in Qalamoun and in the desert in Palmyra, and this has given Hezbollah great military experience,” he said.

“We also fought alongside traditional armies, which has given Hezbollah an ability to develop battle tactics,” he continued, adding that Israel is well aware of Hezbollah’s new abilities.

What comes after Syria?

Besides fighting, Hezbollah has consistently called for a political solution to the conflict in Syria and encouraged dialogue publicly and behind the scenes to end the war, the official said.

“So how long will we stay in Syria?” he asked. “That boils down to two points. Since we have intervened in Syria at the request and with the cooperation of the legitimate government, our exit from Syria will be in cooperation with that government.

“Secondly, we will leave Syria when the reasons for our intervention disappear – when Syrian affairs return to normal and when the conspiracy that targeted the regime in Syria and the resistance in Lebanon and the axis of resistance in the region fails.”

Hezbollah, like the Syrian government, views the war resulting from a 2011 internal uprising as an international plot to destroy the state because of its alliance with Iran.

Still, the Hezbollah official denies that the group has become a fully fledged cross-border military power.

While acknowledging that Hezbollah was involved in a limited capacity in training fighters against the Islamic State (IS) group in Iraq, he said it was not directly involved in the conflict in Yemen.

But Kassem Kassir, a journalist and the author of the book Hezbollah between 1982 and 2016, said the organisation now must balance its Lebanese presence with its newly found role outside the country.

“Hezbollah is no longer an internal Lebanese power,” Kassir said. He added that Hezbollah leaders’ assertion that the group’s fighters will return to Lebanon after the war is an oversimplification.

He said the group was grappling with a new reality in becoming a regional power, though the dynamics of its role going forward are still unclear. “Hezbollah after the Syrian war is not the same and will not be the same as before the Syrian war,” Kassir said.

‘We will be where we need to be’

Before Hezbollah fully committed to the Syrian civil war, the party gave cautious rationales for its intervention.

It began with a need to protect border communities under threat by hardline militants. Then it was about protecting Shia shrines, especially the Sayyida Zeinab mosque in Damascus, from fundamentalist rebels who vowed to destroy them.

About two months after Hezbollah’s first public involvement in the war, in the battle of Qusayr in May 2013, Nasrallah pledged to fight across Syria and beyond to pursue his group’s objectives.

His words in a June 2013 speech stretched the militant organisation’s area of operation: “We will be where we need to be,” he said.

The quote became a sort of motto of what seems to be a new Hezbollah that is not confined within Lebanon’s borders. It now appears on posters across Hezbollah’s strongholds and has even been turned into a song.

The bombings, claimed by al-Qaeda and IS, were condemned across the Lebanese political spectrum. However, they ignited a chicken-or-egg debate about the motive behind them.

While Hezbollah critics accused the group of making Lebanon a target for Syrian militants, the party maintained that its fighters safeguarded the country from what was an inevitable confrontation with militants on Lebanese soil.

A Hezbollah military source, who requested anonymity, reiterated that argument to MEE.

“If it weren’t for Hezbollah’s intervention in Syria, the country would have fallen, and Nusra and Daesh would have been fighting us in our towns and villages in Lebanon,” he said, referring to IS and al-Qaeda’s branch in Syria, which now operates under the name of Hayat Tahrir al-Sham.

The argument that IS was destined to violate Lebanon is often used by local leaders and imams in Shia areas.

The military source cited attacks by IS across European capitals that he said were supportive of the Syrian opposition.

The rise of IS also serves as justification for Hezbollah’s casualties in Syria.

The group has lost hundreds of fighters in the war. There is no official count of its losses but they are estimated to be between 1,300 and 1,500, the military source said.

Hezbollah was able to increase recruitment during the war using the same philosophy of martyrdom that it employed in the fight against Israel.

Pictures of fighters killed in battle over the past three years are reverently displayed across Dahiye, often with a background of Sayyida Zeinab’s shrine in Damascus.

Both Kassir and the military source said that while the loss of fighters in Syria had obvious painful effects on Lebanese Shia society, it had not swayed public opinion against the group.

The military source claimed that foreign and local media had tried to contact families of fallen fighters to get them to publicly criticise Hezbollah, but to no avail.

Kassir agreed that there is little sign of immediate family members of those killed in Syria blaming Hezbollah for their losses.

He said the group has maintained a direct relationship with its supporters and even praised it for taking care of the families of dead fighters.

The organisation has also used theology to glorify the deaths.

For example, at the funeral of a 17-year-old fighter killed in Syria earlier this year, the group’s deputy chief Naim Qassem linked his death to the concept of fate, which is predestined by God and therefore unchangeable.

“After these groups, especially Daesh and Nusra, started showing their true faces, there were only a few opponents to Hezbollah’s role in Syria left,” Kassir told MEE.

The military source said 95 percent of Shia in Lebanon have full confidence in Hezbollah’s leadership and in Nasrallah personally, while conceding that the group was never going to win over some Shia dissenters.

He described them as the “Shia of the embassy”, a derogatory term stemming from US diplomatic cables made public by Wikileaks that revealed meetings between anti-Hezbollah Shia activists and the US ambassador in Lebanon.

Rajeh al-Khoury, a veteran political analyst who writes for the Annahar newspaper, said the Syria intervention had not hurt the organisational homogeneity of Hezbollah.

He said it is an ideological party, and that Nasrallah has publicly committed to the strategic leadership of Iran’s Supreme Leader Ali Khamenei via Wilayat al-Faqih, a theological concept that gives the Iranian ayatollah political custodianship over his followers.

When fighters join Hezbollah, they know that they are a part of this larger system, so internal dissent is not likely, he said.

Still, Hussein Itany, a Beirut-based communications specialist, said there is more than religion and ideology to Hezbollah’s ability to minimise opposition within its base.

“They’re betting on a winning horse,” Itany said of the Lebanese Shia community. “Everything Hezbollah has promised, they delivered. If they say something will happen, it does. If they say it won’t, it doesn’t.”

The Hezbollah political official said, however, that there has been an ongoing effort to use of sectarianism to undermine the group.

Hezbollah, he added, also operates from a political standpoint, citing the group’s relationship with resistance movements in Palestine.

But there is no denying that Hezbollah’s involvement in Syria has been largely perceived through a sectarian lens.

Hezbollah’s main political opponents in Lebanon are Sunni. Its patrons in Iran are Shia. Syria’s President Bashar al-Assad is from Syria’s Alawite community, while most rebels and their regional backers are Sunni.

Khoury said Lebanon is witnessing deep and dangerous sectarian divisions that reflect the state of the Arab world. He added that the sectarian standoff is also what gave birth to IS.

Hezbollah’s role in Syria has intensified sectarian tensions in the country and the region, he said.

“At the beginning of the war, Sayyed Hassan [Nasrallah] used to say there were legitimate demands of the Syrian people that the regime must consider,” Khoury told MEE. “He doesn’t say that anymore.”

When Hezbollah went to war in Syria, large sections of the political establishment in Lebanon were vocal in supporting of the rebels there.

The Syrian government had even accused Lebanese politicians of arming opposition groups that it described as “terrorists.”

Ashraf Rifi, a former justice minister and a vocal Sunni opponent of Hezbollah, said the Lebanese government had established a policy of neutrality to protect the country from a spillover of the war.

“Unfortunately, because we were weak, neutrality was imposed on us. Hezbollah, because it was strong, did not respect the policy of neutrality and sent thousands of fighters to Syria,” Rifi told MEE.

Khoury said the balance of power in Lebanon has been tilted in favour of Hezbollah, which will inevitably diminish the role of the state.

He referred to September clashes between IS militants and the Lebanese army near the Syrian border, when Hezbollah took the initiative in the fighting and struck a deal to evacuate the militants.

“There’s fear over rebuilding the role of the state,” Khoury said.

He added that establishing a capable government in Lebanon would require Hezbollah to come under the umbrella of the state, without unilaterally dragging the country into regional wars.

“Lebanon’s mission is to establish a conscious, responsible environment for co-existence between sects. If Lebanon can’t fulfill this mission, the nation has no meaning,” he said.