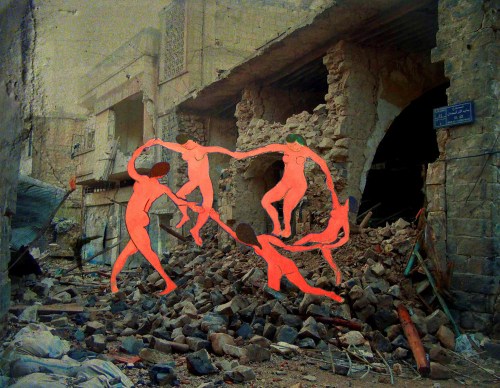 A most significant event took place on October 1st, 2017.

Hassan Nasrallah, the Lebanese leader of Hezbollah, gave a speech that, as per usual, dissected current regional hotspots with much passion, insight and frankness.  But, what was unusual about this particular speech is that Nasrallah addressed Israeli citizens directly, earnestly advising them publicly and for the first time EVER, to start packing their suitcases and to return to their true motherlands in Europe, the US and elsewhere, as soon as possible and before imminent war breaks out.  “You will not have time to pack and leave when war begins; and nowhere will be safe for you in Historic Palestine – nowhere!”, he asserted with gusto.

He also clarified to the Jews of Israel that Hezbollah’s conflict is with Zionism and not Judaism; and that they, as Jews who were brought to Palestine from the four corners of the world, were brought to be cynically used by Zionist leaders, not to be saved.  “Consider your own personal security, now, today, before you believe what your government tells you”, he advised them; “Netanyahu, your leader, is dragging you down a dangerous road that leads only to war; a war that you will lose due to the folly of your leader who has no effective plan to win this war because he has no real information on our military strength, our long and deep reach, the whereabouts or grades of our weapons, or the numerous war skills that we now possess.  His war plans against us will fail and it is you, as Jewish citizens, who will pay the ultimate price for this failure”.  And again, he advised them to immediately leave occupied Palestine for their own safety.

In a sense, Nasrallah practically gave the Israelis the very same options that the Algerians gave the vile French colonialists after 100 years of an Apartheid-style occupation: ‘The Suitcase or the Coffin’ (La Valise Ou Le Cercueil).

It did not strike me that Nasrallah was full of hot air and practicing a massive measure of psychological warfare against the Israelis in his speech just for the heck of it.  He has never before used this kind of language and obviously he has access to precise intelligence indicating Netanyahu is preparing for an imminent war against the Lebanese, otherwise, Nasrallah would not himself be speaking of an imminent war with such vigor and commitment.  His speech clearly indicated he has intelligence that Israel is preparing for a new war that’s part and parcel of the new Zionist plan to break the Iran Nuke Deal and destroy Iran’s regional friends.  Now that the Zionist-ISIS plan has turned to rust and dust before the eyes of the world, predictably, the Zionists are scrambling to start yet another war that continues their relentless expansionist assaults on their neighbors in Lebanon, Syria, Iraq and Iran.

What is also worth noting about the seriousness of Nasrallah’s clear warning to Zionist citizens is that according to Islamic rules of war, a Muslim is required to make a public announcement to their enemy of their intention to go to war, soon as the war decision has been taken – and this is exactly what Nasrallah, a devout Muslim, just did in his latest speech.  This makes a war between Lebanon and Israel now a legitimate endeavor in the eyes of Islam and it makes it most certainly imminent.  And let us here be reminded that a new Lebanon/Israel war will also include a simultaneous war between Israel and Syria, as well as a war between Israel and hundreds of thousands of volunteers from Pakistan, Afghanistan, Yemen, Iraq, Iran AND Palestine, as indeed confirmed by Nasrallah himself.  A true existential war for the very life of Israel is now certainly afoot and visible on the horizon.

We’re talking the ‘Big War’ here, the very war that we’ve been anticipating since 2006 – the ‘Last Levant War’ that I have long predicted: a war that will find Tel Aviv in smoking ruins, a-la Mosul and Aleppo.

And this war could happen sooner than we think; much sooner.  You could go to bed after Monday night football and wake up on Tuesday morning to a full-throttle war in Israel proper and the wider region.  Just like that: with the snap of the finger war could start.

And either side could easily start it – Hezbollah has several times now declared that if it suits its interests, it will use a preemptive strike in the next war; just as Israel is no stranger to preemptive-striking.

The clouds of war are now visible: approaching and gathering apace over Israel, and the trigger could be something as simple as Hezbollah discovering yet another spy-camera, wired to explode and concealed inside a rock by a Lebanese roadside.  Though no casualties have been reported when several of these exploding spy-cameras have been discovered in Lebanon recently, Nasrallah warned in his speech that if this dangerous Israeli provocation continues and causes actual human casualties, Hezbollah will take matters “into their own hands”; meaning: they will respond in like to Israel, inside of Israel.  And responding in like inside of Israel will indeed lead to war.

Not known for mincing words or telling falsities, Nasrallah always means what he says – even Israelis rely on his word above their own government in times of strife, as recorded back in 2006 when some settlers refused to leave their 5-star shelters when their government told them to, and instead waited for Nasrallah’s statement telling them that it was safe now to return to their homes.  Nasrallah’s consistent truth-telling is a large part of his global appeal.  His statements are always extremely measured and precise.  He tends to excel at psychological warfare against the Israelis by simply telling them the naked and hard-core truth that their government blacks-out in the Israeli nanny-media.

“Netanyahu and his government do not know how the war will end if they start one, and they do not have an accurate picture of what to expect should they embark on the folly of war,” he warned the Israelis, reminding them that ALL their wars against the Lebanese Resistance have failed so far and so will the next one.

Here, we recall the 2006 war and the humiliating failures of the Israeli military on the Hezbollah battlefield.  The Israelis had prepared themselves for war against Lebanon in secret, and with much predicted Israeli machismo, they suddenly charged forth at Lebanon, using the silly pretext of a border incident where two Israeli soldiers were captured by Hezbollah as bartering chips for the release of hundreds of Lebanese citizens kidnapped by the IDF and rotting in Israeli jails since year 2000 – at the time, this to-and-fro bartering was a quiet and common practice between Hezbollah and Israel.  Yes, 35,000 Israeli soldiers, backed by the mighty Israeli air-force and navy, charged forth with uber confidence at the Lebanese borders in their numerous Markava tanks, only to be completely repelled by only 3,500 Hezbollah fighters.  One wonders here why the Israelis failed, considering their bigger numbers and bigger guns.  Well, it turned out that the Israelis made their war plans based completely on faulty intelligence passed to them by no less than Hezbollah agents themselves.  “We will destroy Hezbollah”, barked the IDF spokesperson at the time; “we know where they are: we have info on 500 of their weapon depots and leadership locations”.  Not surprising, therefore, that the IDF lost in 2006 – they were relying on false information – as indeed, they are still relying on false information in their preparations for the next war.  And as we all know, the gathering of accurate intelligence is what wins wars in the end, not size of army or gun.

There is a tangible feeling of confidence and preparedness for war, here in the south of Lebanon where I currently reside.  There is a profound desire to punish the Zionist state for all the crimes against humanity that it has inflicted on its millions of neighbors since its immoral inception some 70 years ago.  There is a steely focus and a steadfast courage to confront the Zionist entity and destroy it completely for its relentless and ongoing wanton destruction of the region.  The natives have had enough of Israel’s ruinous conspiracies against them.  They have now linked arms and vowed never to submit to Israeli hegemony, or to future violent, Zionist expansionism.

“Between humiliation and war, we choose war!”, Nasrallah boomed at the end of his address to the Israelis and to his followers.

The hot cloud of war has indeed arrived over Israel – and it will take but a sudden cold wind blowing to burst it.

Looks like we will see the destruction of Israel in our lifetime, after all.  And not a moment too soon.

This should liberate not only Historic Palestine, but Historic Washington D.C. as well, for the deadly political blow that AIPAC’s treasonous agents will suffer.  Not forgetting here, also, the chaos and confusion that will ensue in the Christian-Zionist communities across America, as they witness the very death of Israel and their own religious delusions with it.

No, Jesus will not return, but Palestine will