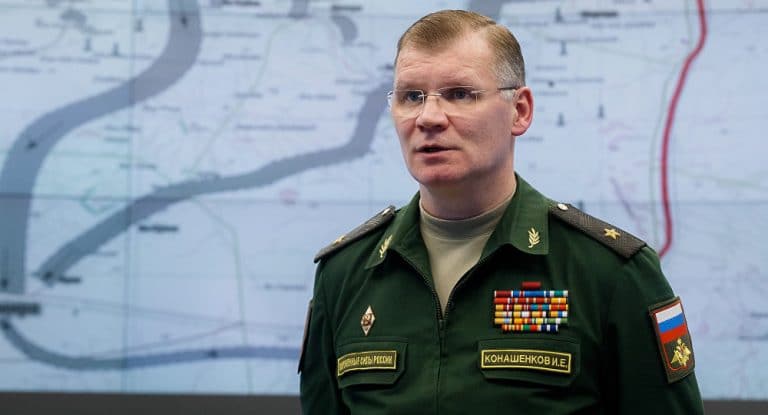 Russia accused the United States on Wednesday of allowing ISIS to operate “under its nose” in Syria, saying Washington was letting the terrorist group move about freely in an area abutting a U.S. military base.

The allegations, made by Russia’s Defense Ministry, center on a U.S. military base at Tanf, a strategic Syrian highway border crossing with Iraq in the south of the country.

Russia says the U.S. base is illegal and that it and the area around it have become “a black hole” where terrorists operate unhindered.

The United States says the Tanf facility is a temporary base used to train partner forces to fight against ISIS. Pentagon spokesman Colonel Robert Manning on Tuesday said Washington remained committed to killing off ISIS and denying it safe havens and the ability to carry out strikes.

But Major-General Igor Konashenkov, a spokesman for the Russian Defense Ministry, said Moscow wanted to know how around 300 ISIS terrorists in pickup trucks had passed through the U.S.-controlled area and tried to block the highway between Damascus and Deir al-Zor used to supply Syrian forces.

He said the U.S. had not yet given an explanation.

“We suggest the American side also explain about another incidence of their ‘selective blindness’ towards terrorists operating under their nose,” Konashenkov said in a statement.

He said about 600 terrorists based in a refugee camp in the U.S. controlled area had driven en masse to a former customs post called Tafas on the Syrian-Jordanian border earlier this month and seized food and medical supplies meant for locals.

“You don’t need to be an expert to now forecast an attempt to rupture the peace agreement in the southern de-escalation zone,” said Konashenkov.

“We issue a warning. All responsibility for sabotaging the peace process will lay exclusively with the American side.”