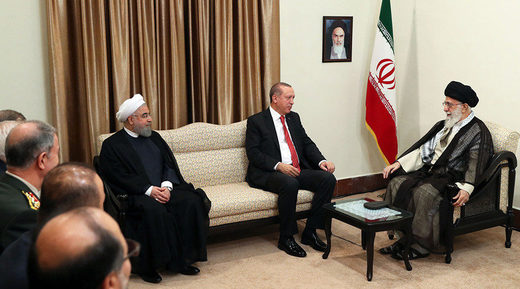 Iran and Turkey have agreed to take “every possible measure” against the independence vote that was recently held in the Iraqi Kurdistan, the leaders of the two countries said, accusing Israel of masterminding the move.

The independence referendum in the Iraqi Kurdistan is a “betrayal” of the Middle East and a threat to the future of the entire region, Iran’s Supreme Leader, Ayatollah Seyyed Ali Khamenei, said during a meeting with Turkish President Recep Tayyip Erdogan in Tehran.

He went on to say that the vote would entail “long-term repercussions” for all neighboring states, adding that Iran and Turkey “should take every possible measure against the move and the Iraqi government, too, should make decisions and take serious action,” as reported by the Iranian state media.

His words were partly echoed by Erdogan, who said that “Turkey’s and Iran’s determination on the matter is evident.”

“Turkey will only engage with the central government in Iraq and we certainly term this referendum as illegitimate,” the president added, as cited by the Turkish Anadolu news agency.

He also warned that Ankara and Tehran are ready to take “more severe steps … in the upcoming period” in addition to the measures they already took following the referendum.

Both leaders also agreed in alleging that Israel played a certain role in the Kurdish referendum, claiming that it sought to “split” the Middle East.

“What is the referendum organized by northern Iraq’s regional administration for? No country in the world apart from Israel recognizes it,” Erdogan said at a joint news conference with Iranian President Hassan Rouhani, who also attended his meeting with Khamenei.

“A decision made at the table with Mossad is not legitimate, it is illegitimate,” the Turkish leader added.

In his turn, Khamenei said that Israel as well as some “foreign powers,” including the US, want to create contention between regional powers in the Middle East by creating a “new Israel.”

“Some foreigners plan to split the area to increase ethnic and sectarian discrimination,” president Rouhani said. “Both countries do not accept such acts of discrimination,” he added, referring to the positions of Iran and Turkey, as reported by Anadolu.

Erdogan further said that after the referendum “northern Iraq’s local administration will be condemned to isolation.”

The Iraqi Kurds held a unilateral independence referendum on September 25. A day later, the President of the Kurdistan Regional Government Masoud Barzani said that most voters cast their ballots in favor of independence.

Baghdad immediately denounced the move as “unconstitutional.” The Iraqi parliament even asked the government to send troops into the Kurdish areas. Turkey, Iran, and Syria also immediately expressed their opposition to the creation of an independent Kurdistan over concerns that it may spur separatist sentiment in their own Kurdish-populated areas.

At that time, Erdogan threatened the Iraqi Kurds with economic sanctions, adding that “military options” are also on the table. He particularly said that Iraqi Kurds will “not be able to find food” if Ankara decides to halt the flow of trucks into the region and “close the oil taps,” diminishing the Iraqi Kurdistan oil revenues.

The US said it did not recognize the legitimacy of the independence referendum, adding that it continued to support “a united, federal, democratic and prosperous Iraq.”

The Russian Foreign Ministry said on September 27 that that Moscow continues to support the territorial integrity of Iraq and other Middle East nations, adding that the issue should be resolved through a peaceful dialog “at finding a mutual form of coexistence in a unified Iraqi state.”

Israel has so far been the only country that supported the Kurdish referendum as its Prime Minister Benjamin Netanyahu said in mid-September that “while Israel is opposed to any kind of terrorism, it supports the legitimate means of the Kurdish people to obtain their own state.”