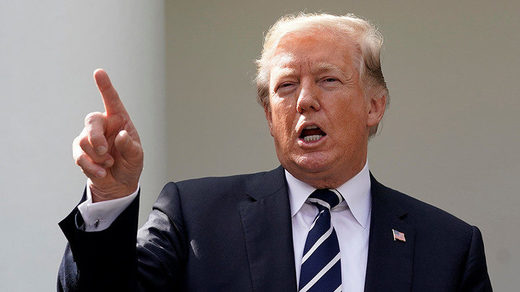 Donald Trump said the EU would have supported US sanctions on Iran if he was insistent. But, according to the US president, he allowed Germany and France to keep making money with Tehran as America was capable of putting pressure on Iranians on its own.

When asked by Fox News if Europe is going to support his new strategy on Iran, Trump replied by saying that he has really warm relations with French and German leaders.”They’re great friends of mine. They really are. I get along with all of them, whether it’s Emmanuel [Macron] or whether it’s Angela [Merkel]… I really like those people,” he said.

As for the Iranian issue, Trump stressed: “I told them [the EU]: ‘Just keep making money. Don’t worry about it. We don’t need you on this.”

He expressed the belief that Europe was reluctant to back his anti-Iranian push for purely economic reasons.

“When Iran buys things from Germany and from France” it allows them to earn “billions of dollars,” Trump said, adding that “when they [the Iranians] buy those things, it’s a little harder for those countries to do something.”

However, the US president concluded by saying: “Would they [the EU] do it if I really was insistent? I believe they would.”