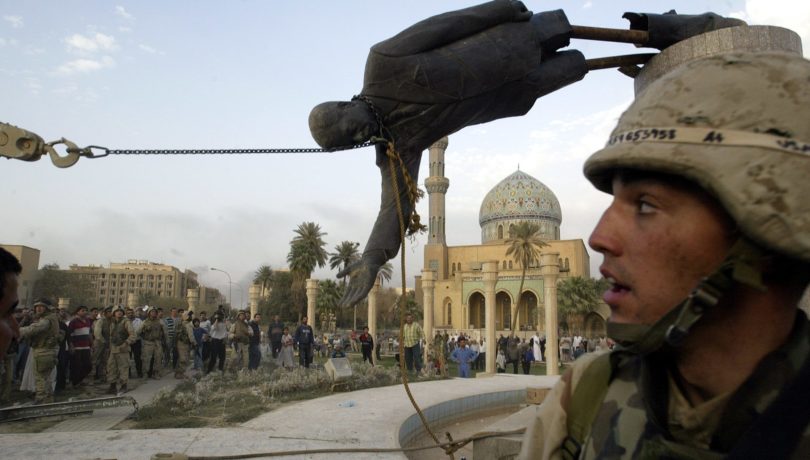 The assault was conducted by US and British troops, with the Israelis receiving real time intelligence throughout the war.  When Bush appeared on national television to announce the invasion, he appeared before a black flag bearing an eagle clutching 13 arrows representing the Hapsburg Spear of Destiny.  Spain- whose monarch Prince Phillip is a Hapsburg- joined the “coalition of the willing” for the assault.

The first task of the invading troops was to encircle the massive Rumaila oilfields in the south.  Soon the northern Kirkuk oilfields were also secured.  For all the pre-war talk of Iraqi weapons of mass destruction none were found.  In May 2003 a group of former intelligence officials accused the Bush Administration of cooking intelligence data concerning weapons of mass destruction (WMD).  The nine-member Pentagon Office of Special Plans charged with skewing the intelligence was known as The Cabal.

A brainchild of Zionist Undersecretary of Defense Paul Wolfowitz, The Cabal essentially supplanted the CIA in providing edited intelligence to the Bush White House.  It’s nine members were disciples of University of Chicago political science professor Leo Strauss, who was dissertation adviser to Wolfowitz and who once wrote, “that the works of ancient philosophers contain deliberately concealed esoteric meanings whose truths can be comprehended only by a few…(this) alerts one to the possibility that political life may be closely linked to deception…”

Invading Iraq had nothing to do with Saddam or WMD.  As one Bush Administration official put it, “After WWII, we thought strategically about what were the key industrial areas of Europe that need to be under Western control…If you start thinking about the Middle East in the same way, Iraq jumps to the front, because it is that nexus of oil, education, geography.”

Bush Administration NSA Senior Director for Near East and North Africa Elliot Abrams- earlier point-man in Reagan’s contra effort- authored a proposal in December 2002 which called for US control of Iraqi oil after Saddam’s ouster.  Assistant Secretary of State Kim Holmes commissioned a proposal for the privatization of Iraq’s economy- including the Iraqi National Oil Company.  The study’s authors Ariel Cohen and Gerald O’Driscoll concluded, “…process should include a massive, orderly and transparent privatization of state-owned enterprises, especially the restructuring and privatization of the oil sector.”

As energy expert Paul Michael Whibey- formerly with the influential Israeli think tank Institute for Advanced Studies- put it, “In post-Saddam Iraq, I think we will see very significant additional volumes from Iraq.  Iraq probably has oil reserves equal to or surpassing that of Saudi Arabia.”  Grandiose proclamations that this oil would benefit the Iraqi people were laid to rest by mid-April when it was announced that the World Bank would administer Iraqi oil during the rebuilding phase.  The bankers would be repaid and their corporations would get fat contracts- all from Iraqi oil proceeds.

The plan to remove Saddam Hussein had been hatched in a 1996 paper written by Bush Defense Policy Board member Richard Perle for then-Israeli Prime Minister Benjamin Netanyahu.  The paper was titled In Defence of the Realm.  Even the language of “regime change” used to justify the invasion came from Perle’s paper.  Perle- another staunch Zionist- was forced to resign due to a conflict of interest involving his role as a board member of the bankrupt Global Crossing, which is set to receive fresh Iraqi communications contracts.  He headed Conrad Black’s Hollinger Corporation and was advising Goldman Sachs International on how they could profit from the war.  Perle was one of 13 members of the Defense Policy Board.  Nine of those members were affiliated with defense contractors, which received $76 billion worth of collective Pentagon gravy during years 2001-2002.

On March 10, 2003- before the first shots were fired- USAID quietly passed out applications for the post-war rebuilding of Iraq.  Only five companies received applications: Bechtel, Fluor, Halliburton subsidiary Kellogg Brown & Root (KBR), Parsons and Louis Burger Group.  In mid-April the New York Timesreported that Bechtel was chosen as lead contractor for the rebuilding bonanza.  Bechtel Chairman Riley Bechtel was now a member of the Bush Administration Export Policy Board.  Bechtel executive Jack Sheenan was a member of the Bush Defense Policy Board.

Bechtel received an initial contract worth $680 million.  Over the course of the Iraq rebuilding effort, Bechtel stands to receive over $100 billion in contracts.  Their first project was to upgrade Iraq’s only Persian Gulf port at Umm Qasr, where they paid Iraqi workers $4/day.

Halliburton- Vice-President Cheney’s cash cow- won the contracts to whip the oil wells into shape.  In May 2003 Congressman Henry Waxman (D-CA) discovered that Halliburton subsidiary KBR had received a $425 million contract to rebuild Iraq in December 2001, a full year and a half before the war had even started.  All told Halliburton had received over $7 billion worth of contracts and the job of putting Iraq back together had barely even begun.  In October 2003 Sen. John Dingell (D-MI) found that Halliburton was charging the US military $2.65/gallon for gas it was importing from Kuwait.  The Iraq was importing that same Kuwaiti gasoline for $1.12/gallon.

On January 24, 2006 Halliburton got a $385 million contract from Homeland Security to provide “temporary detention and processing facilities” in the US.  This came on the heels of a September 2005 NORTHCOM exercise in Washington, DC called Granite Shadow, which paves the way for domestic military operations without civilian control.  In September 2006 it was reported that Halliburton executives ordered copious amounts of food for a Thanksgiving feast in Baghdad, then billed it to US taxpayers.

According to an October 30, 2003 report by the Center for Public Integrity (CPI) most of the seventy firms and individuals receiving the over $8 billion in rebuilding contracts in both Iraq and Afghanistan donated to the 2000 Bush Presidential Campaign.  Sixty percent of these had board members who had served in previous administrations.  As CPI executive director Charles Lewis proclaimed, “There is a stench of political favoritism and cronyism surrounding the contracting process in both Iraq and Afghanistan”.

An article on http://www.commondreams.org claimed that two US forward bases established in Iraq were named Camp Exxon and Camp Shell.  Exxon Mobil must have gone sulking after it was announced that Royal Dutch/Shell and BP Amoco would join Fluor in leading the “reorganization” of the Iraqi oil industry.  Cargill executive Dan Anstulz was tapped to lead the privatization of the Iraqi agriculture sector.  Overseeing the entire resource grab was Paul Bremer, who until 1989 worked for Kissinger Associates.  On June 6, 2003 the Financial Times reported that Iraqi oil would return to the international market and would once again be sold in US dollars, reversing a 2000 Iraqi decision to sell its oil in euros.

On April 16, 2003 Al Manar Television in Lebanon reported that while well-organized gangs ransacked state-run industries and government buildings as US troops stood by, the Oil Ministry was heavily guarded 24-hours-a-day the minute the US took control of Baghdad.  There were persistent rumors in the city that the US had organized the looting, the most serious of which occurred at the National Museum, home to some of the oldest artifacts pertaining to man’s existence on earth, including the cradle of Abraham, Sumerian clay tablets and other relics vital to an understanding of mankind’s origins.  Those relics speak volumes on the origins of the Annunaki Sangreal god/kings now poised to again monopolize the world’s oil.

In January 2006, with US gasoline prices nearing $3/gallon, the Wall Street Journal reported that Exxon Mobil set a new US corporate annual profit record for 2005.  Throughout 2006 the Four Horsemen reported similarly outrageous results. The Eight Families, through the Iraqi invasion, were also attempting to consolidate their control over the world’s central banks.  In an October 11, 2003 national radio address, President Bush enunciated the more grandioseambitions of his handlers when he stated, “The new Iraqi dinar will highlight the country’s crown heritage…in this ancient region which founded modern banking”.  In November 2003 Bush appointed Carlyle Group partner James Baker to forgive Iraq’s debt- now Eight Families debts.

By 2006 the Illuminati oil mafia had set its sights on Iran, the ever-strategic bridge between the rich oilfields of the Persian Gulf and those of the Caspian Sea.  Fiery Iranian President Mahmoud Ahmadinejad gave a hero’s welcome to Venezuelan President Hugo Chavez and challenged President Bush to a debate.  He repeatedly criticized Israel and asserted Iran’s right to develop nuclear power.  Worse yet for the global oligarchy, he announced plans to launch an oil bourse in Tehran which would trade oil in euros.

In July 2006 Israel invaded and bombed Lebanon, accusing Syria and Iran of arming Hezbollah rebels.  Iran began military exercises, as did Russia, China and other nations of the Shanghai Cooperation Council.  The US referred Iran to the UN Security Council and an August 31st deadline for Iran to cease uranium enrichment came and went.  In September 2006 both Ahmadinejad and Chavez blasted US imperialism at the UN.  Chavez referred to Bush as “the devil”.  The next day he offered 100 million gallons of heating oil to Harlem’s poor.  In a 2010 United Nations speech, Ahmadinejad said 911 was an inside job.

Exxon Mobil provided quite a contrast to Chavez’ generosity when it reported a $39 billion net profit for 2006- a record for any corporation in world history.  Chevron and Shell reported similar results.  None gave away heating oil in Harlem.  In January 2007 Bush submitted a $624 defense budget to Congress.  Less than twenty nations in the world have a bigger national budget.

In 2005 HSBC partnered with Saudi British Bank.  In February 2007 Goldman Sachs formed a partnership with Sulaiman Olayan’s National Commercial Bank- the largest in Saudi Arabia.  Just a month earlier Morgan Stanley had announced a joint venture with The Capital Group- a major Saudi investment bank. Dubai was becoming an international financial center. With both the US middle class and the Iraqi people hanging on by a thread, the Eight Families continued to consolidate their power over the Persian Gulf region and the world.