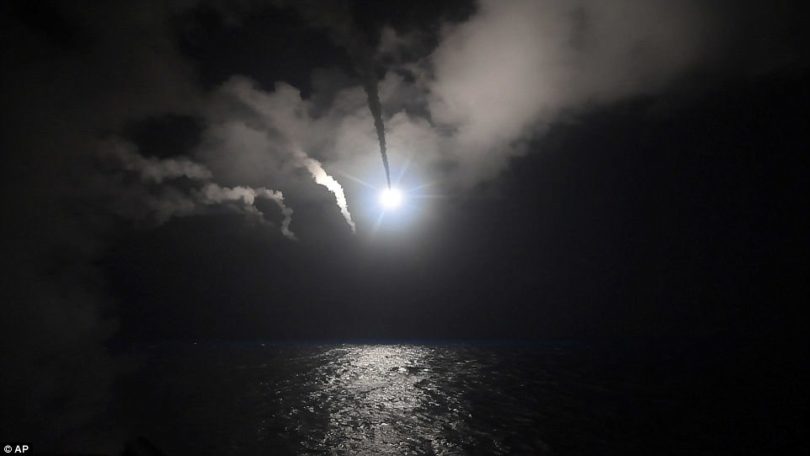 Moscow is inclined to believe that the Idlib chemical incident in April, which was used by the US as a pretext to strike Syria’s Shayrat Airbase, was staged, the Russian Foreign Ministry said, stressing the need for a thorough and impartial investigation.

On Friday, the head of the Non-Proliferation and Arms Control Department of the Russian Foreign Ministry Mikhail Ulyanov told UN briefing that Moscow cannot rule out that the Khan Sheykhoun chemical attack, which took place on April 4, was staged.

Presenting photographic evidence of a crater from the scene of the chemical incident, Ulyanov stressed that the bomb which dispersed the deadly chemical agent was most likely detonated on the ground and not on impact from a Syrian airstrike.

“Most likely, an improvised explosive device was located on the surface,” Ulyanov said, adding that it contained no more than 1-2kg of “chemical warfare agent.” Aerial bombardment, the diplomat reasoned, leaves much deeper and wider craters in the ground.

The Russian diplomat also demonstrated pictures and videos of children from the alleged scene of the attack, noting that if sarin was indeed used on them, then their pupils would not have been dilated, but instead would substantially contract. He said these kids might have been “drugged” to heighten the media hysteria and the emotional appeal surrounding the chemical incident.

“Apparently, the children pictured in the photos were actually exposed to psychotropic substances,” Ulyanov said.

“The question arises — what actually happened in Khan Sheykhoun? Unlike some of our partners, we do not intend to categorically impose our point of view. We believe that the JIM [Joint Investigation Mission] must work out all versions, including an airstrike,”Ulyanov said.

“Russia, at the same time, expects the staged incident version to be also carefully considered since, honestly speaking, we tend more and more to opt for that version,” the diplomat said at the UN during a briefing on the ‘Syrian chemical dossier.’

The Khan Shaykhun chemical attack happened on April 4, 2017, in the town of Khan Shaykhun in the Idlib Governorate, an area that was under the control of Tahrir al-Sham, better known as the Al-Nusra Front terrorist group. The sarin gas attack which allegedly claimed the lives of between 74 to 100 civilians reportedly happened when the town was struck by the Syrian Air Force.

‘I don’t believe a word of it’ – CIA whistleblower on US intelligence about Syria chemical attack https://t.co/0ESPTGC5gh

Washington immediately rushed to blame Damascus based on open-source intelligence, despite the denial of the Syrian government, which destroyed all of its sarin stockpiles under the deal brokered between Russia and the US in 2013.

Despite any lack of evidence, three days later US President Donald Trump authorized the launch of 59 Tomahawk cruise missiles at the Shayrat Airbase, from where US intelligence claimed the chemical attack was launched.

Russia and Syria have repeatedly called on the international community to conduct a thorough impartial investigation into the matter. Moscow has long insisted that the previous investigation report, which was released by the Organization for the Prohibition of Chemical Weapons (OPCW) in June and found traces of sarin in the samples of soil, has many flaws and cannot be deemed conclusive.

The most glaring problem with the report, Russia insists, is the fact that the OPCW-JIM mission never actually visited the site of the alleged attack but relied on the evidence collected by the militant groups controlling the area. The experts have also failed to inspect the Shayrat Airbase.

Ulyanov said that Moscow will study the new report by the OPCW which is due to be released on October 26, to see if JIM mandate should be renewed for another year.

“In order to judge if it deserves an extension of the mandate, we need to see the report to be issued on October 26 and assess it,” Ulyanov told a briefing in New York.

OPCW is faced with a “scandalous situation” by refusing to visit the Shayrat base, where Western capitals claim the chemical attack originated from.

“Experts of the OPCW, according to our data, are ready to take samples there,” if the Syrian government provides safe access to Shayrat, Ulyanov said. Yet despite guarantees from Damascus, for some “unclear reasons [the organization] categorically refuses to give appropriate instructions” to its team to collect the chemical samples.

The Russian envoy stressed that the fact-finding mission still has one month left to take those samples before their current mandate expires.

“I ask myself what’s the reason for the extension of the mandate of this mechanism if it is not capable and is not willing to fulfill its mandate,” he wondered.

Adopted in 2015 the OPCW-JIM mandate was renewed once for a year. The current mandate is due to expire in mid-November.