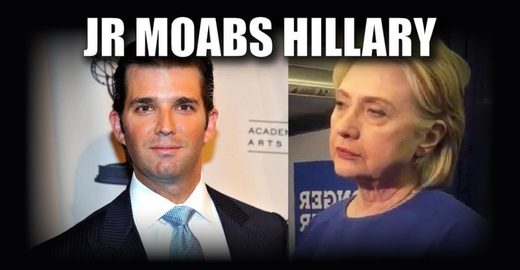 The Washington Post‘s blockbuster report that the Hillary Clinton campaign, in partnership with the DNC, hired the firm that utilized gossip from various unnamed Russian government officials to create the so-called Trump Dossier, marks a key turning point into the investigation into Russia’s attempts at influencing American politics.

The DNC not only accepted this second-hand, uncorroborated information, but actually sought it out, financed it, and disseminated it through Washington.

Now rewind the clock to July, after The New York Times reported that Donald Trump Jr. had been approached by a mysterious Russian lawyer with an offer of dirt on Hillary Clinton.

Trump Jr. accepted the meeting but by all accounts, the lawyer had misrepresented her intent, and no anti-Hillary intel was exchanged.

Nonetheless, the media and many prominent Democrats fell into a fit of hysteria.

Trump Jr. was quickly accused of “treason” and “colluding” with a hostile actor. Some said he would certainly be going to jail.

CNN’s Jake Tapper said, “It’s rather momentous: This can’t just be – this can’t be dismissed as people out to get Donald J. Trump Jr. or fake news. This is evidence of willingness to commit collusion.”

The former chairwoman of the DNC, Rep. Debbie Wasserman Schultz, said the meeting fits the definition of collusion.

“Clearly, what we learned today is that the president’s son, his namesake, a senior advisor and someone who was in the top tier of the Trump campaign colluded, which is the classic dictionary definition of what that means,” Wasserman Schultz said. “There is no question what Donald Trump Jr. agreed to do — with relish, I might add — is meet with a lawyer who he believed was affiliated with the Russian government to assist his father’s campaign and collect dirt on Hillary Clinton. If that is not the definition of collusion, I don’t know what is.”

“We are now beyond obstruction of justice in terms of what’s being investigated,” Kaine said. “This is moving into perjury, false statements and even potentially treason.”

As a former prosecutor, my reaction was these e-mails are a textbook example and evidence of criminal intent. I can almost hear the closing arguments of the jury using “I love it,” repeating again and again, “I love it.” Those three words are going to haunt Donald Trump Jr. Because they are a clear signal that he is looking for information, dirt, on Hillary Clinton from the Russian government and expecting an agent of the Russian government to be providing it to him, and having the meeting showing, and again signalling, the Trump campaign is open for business. We will accept information no matter how it is obtained legally or illegally. And that is potentially a violation of the FBI, yes, treason, and it is potentially a violation of the prohibitions of defrauding the government through conspiracy, against cyber fraud and abuse. There are a slew of statutes that may have been violated here.

CNN’s Bakari Sellers said Democrats ought to make a bigger deal over Trump Jr.’s meeting, as “what he did was a threat to our democracy and borderline treason.”

Attorney and former White House ethics czar, Richard Painter, became a fixture on the TV circuit, where he said the meeting could constitute treason.

“The facts reported in The New York Times article come very close if not is crossing the line with respect to treason if those facts are true,” Painter said on MSNBC.

Stephen Colbert summed up the hopes of many when he concluded that Trump Jr. was “going to jail.”

Will these same personalities level the same accusations against Clinton and the DNC? Weigh in with your thoughts below.