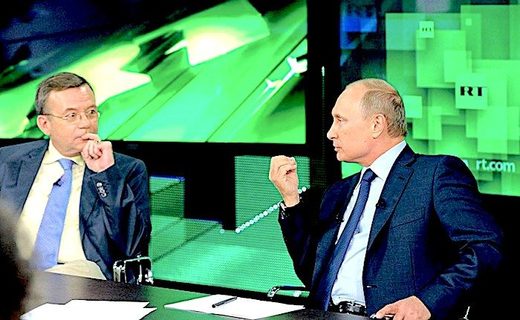 by Alex Christoforou
The Duran

Maria Zakharova said any move made against Russian media working in US “will get a tit-for-tat response”.

Russia’s communications regulator has responded to the US “RT witch-hunt” unfolding in Congress, after US Senator Mark Warner hinted that RT’s Twitter advertising poses a threat to America’s “democratic institutions”.

Frankly I don’t think they understand how serious this problem is. https://t.co/6oMox8856C

Russia’s response is firm and clear, threaten RT and we will crack down on CNN’s operations in Russia…an outlet which the regulator says is “violating Russian media law.”

Russia’s communications regulator on Friday accused U.S. TV channel CNN International of violating Russian media law and said it had summoned the broadcaster’s representatives in connection with the matter.

The Russian foreign ministry accused Washington on Thursday of putting unwarranted pressure on the U.S operations of Kremlin-backed media outlet RT, and warned that Moscow could take tit-for-tat measures.

The communications regulator, Roskomnadzor, said in a statement on its website that it would look at warning CNN about the alleged violations, which it said also breached the terms of its broadcast license.

It did not say what breaches of Russian laws the U.S. broadcaster had made, adding it would continue its “systematic monitoring” of foreign mass media outlets registered in Russia.

According to Zerohedge, Russian president Vladimir Putin also weighed in on the hysteria and mounting pressure being placed on RT saying that “such pressure on Russian media is unacceptable” and that any hostile actions taken against Russian media in the U.S. would be met with a “tit-for-tat response.”

Putin, meeting permanent members of his Security Council, “touched upon the issue of ongoing and at times growing pressure on Russian mass media outlets in some foreign countries”, Peskov told a conference call with reporters.

“It was stressed that such pressure on Russian media is unacceptable,” he added. He did not name the countries where the Kremlin was concerned Russian media were coming under pressure.

The Foreign Ministry’s Zakharova said any move made against Russian media working in the United States “will get a tit-for-tat response”.

“And who it falls on, this should be easy for Washington to work out. The clock is ticking,” she said at a weekly briefing on Thursday.

The Duran reported that RT Editor-in-Chief Margarita Simonyan said that she wasn’t aware paying for advertising on social media platforms like Twitter is now considered suspicious or harmful in a developed democracy such as the United States.

“This is forcing us to go a step further and come clean that we also spent money on advertising at airports, in taxis, on billboards, on the Internet, on TV and radio. Even CNN ran our commercials,” Simonyan said. “By the way, similar campaigns are conducted by the American media in the Russian segment of Twitter. It’ll be very interesting to find out how much they spend on it, who they target and for what purpose.”