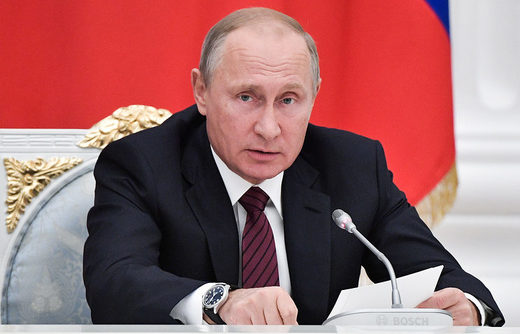 Russian President Vladimir Putin has called on the global community to abandon the double standard policy in the fight against terrorism.

“We support an integrated approach to countering terrorism, the spread of its ideology and funding illegal armed groups, as well as rejection of the double standard policy in the fight against the major modern threat,” says the presidential welcome address to the participants of the 16th meeting of foreign intelligence, security and law enforcement chiefs that the FSB opened in Kranosdar.

“We call on the global community to carry out key resolutions of the UN Security Council in this sphere,” the head of state noted. Putin pointed to the growing number of terror attacks across the globe which corroborates the need to team up against international terrorism.

Putin noted that the growing number of terror attacks across the globe shows the need of joint efforts against international terrorism.

“Active counter-terror activities in Syria and Iraq did not lead to total demolition of the infrastructure and combat potential of terrorist organizations. Militants changed their tactics and started creating new strongholds in other states and regions,” the president stated.

Putin stressed that, in light of this, foreign terrorists who passed ideological brainwashing and sabotage training in armed conflict areas and are coming back to their countries where they continue conducting terror activities constitute a serious danger.

“This source of recruitment for international terrorism should be duly detected and neutralized,” the Russian president said.