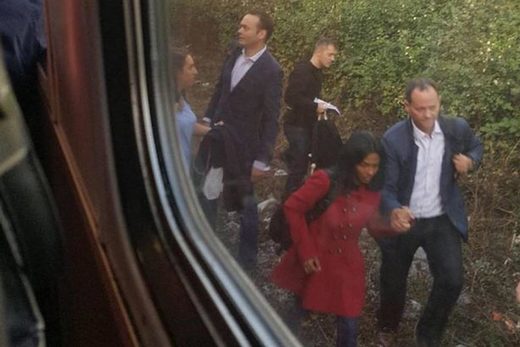 by Nick Pisa
The Sun

A doomsday preacher caused panic on a rush-hour train service yesterday by ranting about the end of the world.

Commuters forced open doors and jumped off when the man began quoting from the Bible about sin.

Some worried passengers forced open doors and walked close to “live” electric tracks to reach the platform at Wimbledon station in south west London forcing operators to turn off power.

Delays of more than an hour were reported as cops were called to the station to speak to the preacher who rattled travellers by talking about “Doomsday”.

One travelled on Twitter wrote:”Held up on the train to Waterloo, some nutter starts reciting verses from the Bible, causes a crush and a panic as people fear for their lives.

#DisruptionSWR **NEW** Due to customers exiting the train before it is at a platform at Wimbledon all lines are blocked.

Held up on a train to Waterloo, some nutter starts reciting verses of the Bible, causes a crush and a panic as people fear for their lives

“He caused such panic that some people have forced open and jumped onto the tracks.

“He recited lines about homosexuality and sex outside marriage being a sin.”

Another user said he has sparked terror as he started muttering about the “Doomsday and the end of the world” and travellers feared he may have had a bomb.

The drama took place on the 740am Shepperton to London Waterloo train, just a few minutes from Parsons Green underground station where a bomb exploded last month leaving dozens injured.

Passengers prised open doors on the train and fled after a woman shouted she thought the preacher was a terrorist.

A British Transport Police spokesman said: “We were called to Wimbledon station and a man in his 20s was spoken to and given some advice.

“There were no arrests or injuries and services were disrupted after passengers self evacuated from the train.”

South West Railways said:”Our control centre received an emergency call from a driver in the Wimbledon area stating that a passenger had left the train and on was on the track.

“Because of this it was necessary to turn off the current in the area until it was deemed that the person was in a position of safety.”