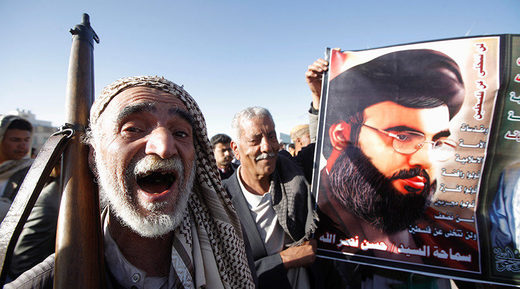 The leader of the Lebanese based Hezbollah has said that Israel and its allies are worried over the imminent defeat of the Islamic State terrorist “project,” and are back on course to plunge the region into chaos by sowing division, starting with Iraqi Kurdistan.

Sayyed Hassan Nasrallah warned against the partitioning of Iraq in the wake of this week’s Kurdish independence referendum, arguing that its cessation from Iraq will set off a chain reaction and lead to more endless wars in the region.

On Monday, the Iraqi Kurdistan region held a non-binding referendum, where some 3.45 million ballots were cast. Over 92 percent of those who voted opted in favor of independence, according to local authorities.

The Iraqi parliament condemned the vote and has imposed a number of trade and economic restrictions on the region. Neighboring Turkey, Iran and Syria also oppose the creation of an independent Kurdistan, mainly over concerns that it may spur separatist sentiment in their own Kurdish-populated areas.

In the region, only Israel endorsed the referendum and supports the establishment of a Kurdish state.

On Saturday, the Hezbollah chief warned that the Kurds’ independence drive is a threat to the whole region. Nasrallah called the September 25 referendum a part of the US-Israeli plot to carve up the region, a policy, which according to Nasrallah, is driven by arms companies.

“We say to our beloved Kurds that the issue is not about deciding your fate, but about dividing the region according to sectarian and ethnic belonging,” the Hezbollah leader noted, according to Almanar news.

“After the failure of the ISIS project, it’s now back to the project of dividing up the region, first from the area of Kurdish Iraq,” he added, according to the Jerusalem Post.

The leader of the militant organization, designated as a terrorist group by Israel and the US, believes the threat of partitioning the region increases with the looming defeat of the Islamic State (IS, formerly ISIS/ISIL terrorist group).

“Daesh is at its end. It is a matter of time in Iraq and Syria,” Nasrallah, whose Hezbollah forces are actively fighting ISIS in Syria said. “ISIL is incapable of regaining territory. The group is trying to exhaust the Syrian army in order to delay its end. However, this plan is ineffective because the decision to wipe out ISIL has been taken.”

At the same time, he called on all people of the region to confront any efforts to sow the seeds of division.

“The people of this region bear the responsibility of confronting this scheme of the division,” Nasrallah noted. “There should not be an ethnic bias between Arabs, Kurds or Iranians, the problem is not with Kurds, it’s a political one.”

Most world powers have criticized Monday’s referendum. Moscow said it respects the desire of Kurds to have a national state but underlined that autonomy should be pursued only through peaceful dialogue and within a unified Iraqi state.

Washington, who has been reliant on Kurdish forces fighting against IS and other terrorist groups both in Iraq and Syria, has called on Iraq to maintain its territorial integrity.

“The United States does not recognize the Kurdistan Regional Government’s unilateral referendum held on Monday. The vote and the results lack legitimacy and we continue to support a united, federal, democratic and prosperous Iraq,” US Secretary of State, Rex Tillerson said Friday.