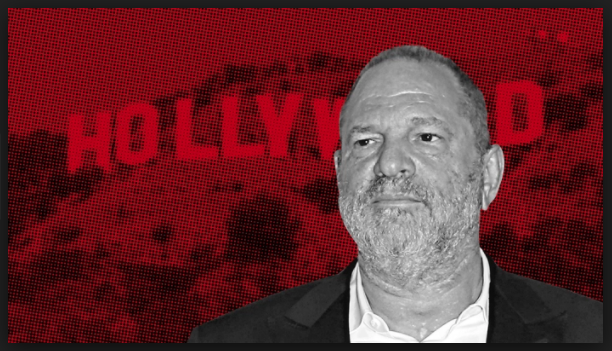 You really have to wonder what’s behind the “epic takedown” of Hollywood powerhouse Harvey Weinstein.  As follows:

This is why they took down Harvey Weinstein

For those of us who have watched Hollywood’s downward spiral into utter decadence and sheer depravity, you really gotta love it.

Now we have Hollywood producing its worst horror flick ever — that was literally decades in the making — and it turns out to be a global blockbuster without ever even making it to the theaters.

Not only that, but it took someone with the stature and success of MIRAMAX mega-producer — Harvey Weinstein — to pull it off.

We’re talking about the most horrifying reality show of all time experienced by perhaps hundreds of actresses and other female movie wannabes throughout Hollywood.

How, pray tell, can you possibly beat a reality horror flick whose trailer begins with:

Hollywood is truly in BIG trouble.  American audiences have been dwindling for years (all the attendance numbers are routinely fudged to present the appearance of success).  The social reality is that H O L L Y W E I R D is a HUGE mess.  The entire industry has operated in a cesspool of corporate corruption, moral degeneracy and financial criminality for decades.

What very few movie fans realize is that the Motion Picture and TV industries have been owned and operated by the Central Intelligence Agency practically forever.  No content ever makes it to the silver screen unless it has been approved by the CIA.  All content of this nature is considered “intelligence” of some type, and is therefore tightly regulated by The Company (aka the C.I.A.).

Does anyone really believe that the thought police will not censor anything that is not fit for American consumption (based on specific social engineering guidelines)?  Movies and TV constitute a major pillar of the mainstream media.  What they disseminate throughout the public domain is of great consequence as far as the power elite is concerned.  They will not tolerate any material that is so radioactive, or so truthful, or so revelatory that it would jeopardize their Global Control Matrix.

There are many big players in Hollywood who are well aware of the CIA’s pervasive control mechanism.  They know that the bigger they get, the more beholden they are to their masters in The Company (as the C.I.A. is known in intelligence circles).  However, every once in a great while someone forgets who gave them their power and decides to leave the reservation.  Welcome to H A R V E Y G E D D O N ! ! !

Harvey Weinstein stars in his own flick

The America people thought they heard it all when Bill Cosby decided to star in his own similarly sordid reality show.  However, HARVEYGEDDON will prove to be much more lasting in its effect on the whole God-forsaken industry.  Just today a new headline read: Weinstein Scandal Causes More Collateral Damage

Already there have been serious incriminations and recriminations reverberating throughout Tinseltown that are way beyond the multi-decade Weinstein affair.  Even George Clooney has gotten mixed up in it, which just goes to show you this is only the beginning of Hollywood’s comeuppance. George Clooney denies silencing actress’ harassment claims

Then there is up and comer Ben Affleck who has run afoul with the “sexually inappropriate” police.  The same people who are condemning Weinstein quickly find themselves in the very same stew pot. Weinstein Scandal: Ben Affleck is now on the firing line  This Hollywood BEAST not only has legs, it’s running so fast through the celebrity society that it will soon be difficult to find anyone who has not been thrown in the stew pot (some would say “karmic soup”).

Of course, you could not cast a better production without the director, producer and star of the show—Harvey Weinstein.  The guy is a real sketch, and absolutely perfect for the main part.  We’re talking about the proverbial piece of work.  You just can’t make this stuff up… which is the best (really the worst) kind of acting there is.  Harvey didn’t even need to practice his lines he had used them so many times before IN REAL LIFE!

The bottom line here is this now self-evident prediction:

As Harvey Weinstein crashes and burns,
so, too, will Hollyweird

There’s a MUCH bigger story here than just Harvey and his sex crime spree.  There’s a much bigger story than Harv and his hardened network of Hollywood sexual abusers and deviants.  There’s even a much more serious saga than the notorious history of Hollywood’s patriarchal casting couch that demanded sexual favors and lustful indulgences in return for big parts and frequent access.

That story, of course, is Pedogate.  PEDOGATE is actually “A Global Crime Syndicate Much Bigger Than Pizzagate“.  Where the American origins of Pedogate are found in the Hollywood celebrity culture, the U.S. political franchise is located in Washington, D.C. and is recently known as Pizzagate.  This is where things are about to get very, VERY dicey.

That’s because whenever you have characters like Harvey Weinstein and Hillary Clinton, John Podesta and Bill Clinton in the very same room; there’s a play being made for you know what.  Which means that Pizzagate is about ready to go prime time—AGAIN!