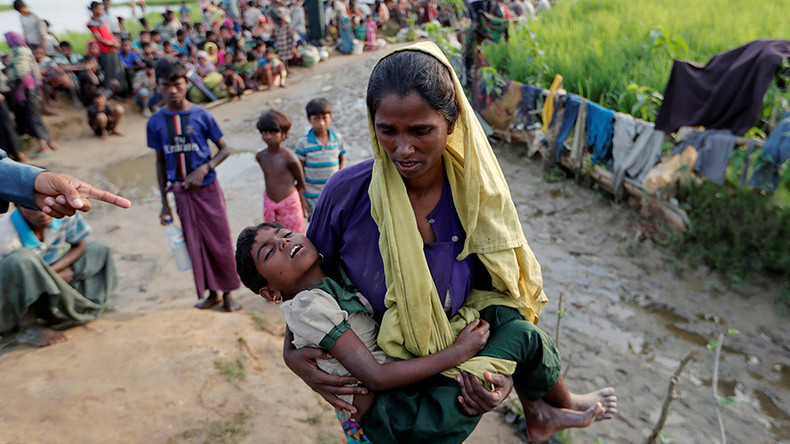 It’s official. Myanmar, according to the UN in its latest report, has given in to wanton murder and systematic oppression to cleanse its streets of its designated undesirables: Rohingya Muslims. However, violence is but the tip of that iceberg.

“Myanmar security forces have driven out half a million Muslim Rohingya from northern Rakhine state, torching their homes, crops, and villages to prevent them from returning,” the UN human rights office said on October 11, warning that the findings confirmed atrocious human rights violations, including, but not limited to: rape, murder, and torture of children.

There is something utterly perverse in the targeting of children. It is not so much that their vulnerability commands we offer them protection, but that their very existence represents the future of a people – in this particular case Rohingya Muslims. There is something to be said of the systematic targeting of children when ethnic cleansing becomes a state’s primary political narrative.

I would say that Myanmar has long confirmed what many rights activists and experts had decried when it turned repression into a general exercise of ethnic cleansing with a strong sectarian undertone. For all the guilt Aung San Suu Kyi (the leader of the National League for Democracy and the first and incumbent State Counselor, a position akin to a prime minister) may presently carry upon her shoulders, Myanmar’s brush with genocide began decades ago when its seat of power choose to anchor its national identity in exclusionism.

Rohingya Muslims’ plight crystallized in 1982 when Myanmar introduced a series of law and regulations demanding that all wannabe Burmese proved ancestry as far back as 1823, thus automatically outlawing entire segments of society.

While Rohingya Muslims’ suffering may only have reached our screen, their reality has been one the United Nations has decried as profoundly troublesome by the nature of the persecution they have faced.

“The Rohingyas are one of the most persecuted groups in the world,”stated the UN earlier this September.

Whichever way one chooses to look at Myanmar, it is somewhat evident that oppression and more pertinently mass-murder has been run from the highest office in the land as part of an agenda which roots are anchored in Myanmar’s own sense of national sovereignty. Again, for all the guilt Aung San Suu Kyi should ultimately answer to, our criticism needs to carry further if truly we are to offer justice to Myanmar’s victims.

I would argue that Myanmar’s genocidal tendencies are a reflection of a malady, or rather an agenda that seeks to rationalize ethnic and/or sectarian-based cleansing as a normative weapon of war – no longer the aberration to be frowned upon, genocide could then be reinvented as an affirmation of a country’s national identity. We would do well to remember that only a few decades ago certain European capitals entertained that very idea … fascism, as it were, remains a powerful plague elites love to flirt with to assert their hold over the political narrative.

If one looks beyond Myanmar to recognize emerging patterns, then connecting those proverbial dots becomes child’s play indeed. In that terrible chess game, Myanmar is but one pawn.

I will urge readers here not to get bogged down by numbers or even geography, but instead focus on intent. From Bahrain to Yemen, Iraq to Pakistan and Afghanistan, specific ethnic and religious groups have suffered either at the hands of governments or armed militants backed by governments. I am not interested in naming those aforementioned governments. I would much rather concentrate on unveiling those dynamics we too often blank out.

Murder, organized socio-political oppression, forced migration, disenfranchisement based on ethnicity or faith, torture, rape, starvation … those have been the weapons of an elite against designated targets. Which targets have been systematically dehumanized and their suffering watered-down for the sake of geopolitical pragmatism.

One may recall how in 2016 Britain was accused of “waging a behind-the-scenes PR offensive aimed at neutering United Nations criticism of Bahrain for its human rights record, including the alleged use of torture by its security forces.”

One may also recall the glee with which the United States provided Saudi Arabia with weapons in the face of Riyadh’s implacable war with neighboring Yemen, or again how Henry Kissinger argued the safeguard of ISIS as a means to thwart Iran’s traction within the Greater Middle East.

Of course, numbers and intensity have varied! Of course one cannot compare Myanmar’s losses, in August the European Rohingya Council reported that an estimated 3,000 Rohingya Muslims had been massacred within three days, and that of Bahrain for example. And yet the nature of the agenda behind such violence is one and the same.

I will posit however that one life is worth that of humanity in general, and that one loss equates to that of our humanity.

In a report for the Daily Telegraph Nicola Smith covered a rather worrying, and yet telling development in the systematic targeting of the Rohingyas: organized starvation.

She writes: “The Burmese army is now using starvation as a new cruel tactic to drive the remaining communities of the Muslim Rohingya minority out of Burma.”

And: “A fresh surge of refugees driven by fears of starvation and violence fled to Bangladesh on Monday. But many others have been stranded on Burma’s Maungdaw beach, without food or shelter and unable to pay traffickers to take them across the River Naf to safety.”

How is Myanmar’s modus operandi against its own designated enemy any different from Saudi Arabia’s decision to man a humanitarian blockade against Yemen in its desire to break people’s will and die out the opposition, especially if we consider the narrative behind such actions is sectarian-based?

It is because we have failed to uphold international norms by arguing exceptionalism that the abhorrent has become normative and the unspeakable the new normal.

That I believe in the real tragedy lurking behind Myanmar’s massacre of Rohingya Muslims.