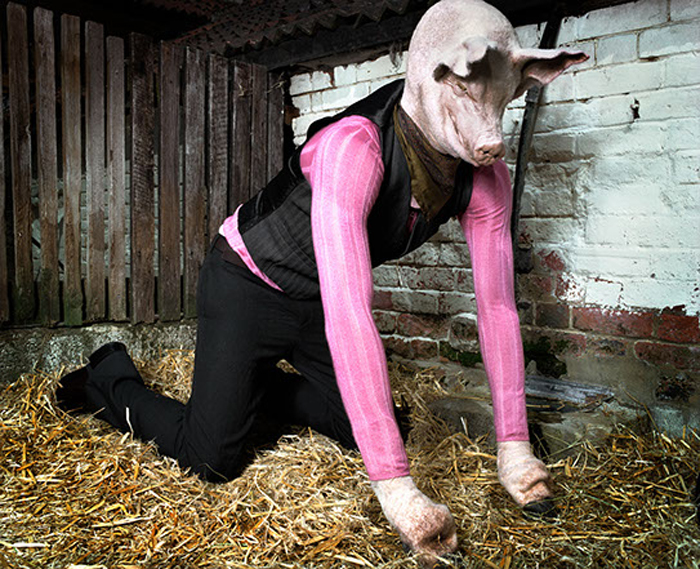 Will this help to boost the sale of pork?

How would you feel if you met Mr Pigman one day, sitting opposite you in a train as you munched your way through a bacon sandwich, and he grunted: “Oink, oink! Eating bacon is not advised! Apart from the ethical consequences of eating hybrids like me, it will give you cancer!”

I guess that would put you off bacon for life.

Seriously though, I am perturbed at new developments in science. The other day I was sitting opposite two gay men in a train, canoodling with each other and whispering sweet nothings into each other’s ears, when I happened to read this headline in my newspaper:

“ARE MOTHERS DOOMED?
BABIES MAY BE MADE WITHOUT WOMEN.
— Daily Mail, September 14

Wow, imagine how I felt when I saw that!  Suddenly I felt redundant. The human race could get on quite well without me and my out-of-date ovaries. The female sex itself, incredible as it might seem, was as dead as the dodo. Men, if they wished, could now get by without us women.

This is what I read in my paper, while glancing uneasily at the two male canoodlers perched opposite me: “Babies could be made without women, landmark research suggests. The embryos could even be nurtured outside the body in artificial wombs, making women redundant from the creation of life.”

That shook me up a bit, I can tell you.

I continued reading with trepidation, chewing my lower lip with mounting alarm: “Hi-tech IVF treatment would allow two men to have a baby that is genetically their own. It could also allow a man to have his own child — without any input from another man or woman.”

I read no more, letting my eye flick over the two gay men opposite me, both covered in interesting tattoos.

“Congratulations!” I muttered grimly to myself,  sotto voce of course, so as not to give needless offense, “you guys no longer need me or my kind to have a baby! You can have your own baby without going anywhere near a woman. No need to ask for her eggs. Yep, you don’t even need each other! You can creep off into a solitary corner, each in a different part of the city, and have your own babies! Without bothering to get another human being, male or female, to cooperate with you!”

It’s a good thing they didn’t hear me talking to them in my head.

At this point, the two charmers desisted from their public canoodling — they had noticed my intense scrutiny— and one of them leaned forward and asked solicitously, “Everything OK, young lady?”

I am not particularly young, but I was flattered at the compliment. Pulling myself together with a jerk, and switching on my most engaging politically correct smile, I said: “I’m fine! Sorry if I was staring at you. I was just admiring your tattoos. So artistic!”

I won’t go on. The rest of our journey was pretty uneventful. Nothing else happened during that trip to disturb the tranquillity of the universe.

OK, so I was a bit worried, as you can see, and so I began to investigate further. What I learned in the next few days did little to calm my jangled nerves.

By chance I happened to see the 1997 movie Gattaca. This was about a future society based on eugenics where people were divided into two clear-cut groups: the genetically superior (“the Valids”) and the genetically inferior (“the Invalids”). The Valids appeared to be the rich, uppercrust types who could afford expensive medical treatment. Not only to make themselves look perennially young and beautiful with plastic surgery, but also to acquire designer babies with flawless physiques and IQs that would have made Einstein turn green with envy.

As I write, there is news coming from China about creating superior animals—such as the super beagle. Considering that they eat dogs in China, I couldn’t help wondering if this were some kind of bizarre experiment to create superintelligent dogs for the cooking pot. “Does one become more intelligent,” I asked myself idly, “by eating the flesh of an extremely smart dog, rather than the flesh of the average dimwitted cow?”

Good question. Unfortunately, I don’t have the answer to that, having never tried to coordinate my eating habits with the IQs of the animals so consumed. In fact, I am more or less vegetarian, so unless they do something to enhance the IQs of cabbages and cucumbers, there is little hope for me.

To add to my concern, I learn there are rumors that the Chinese could now be replicating humans at clone factories.

“Is China attempting to lead a race toward superiority through genetics?” asks genetics researcher Nick West. “Are they responding to where they believe the US already has headed? Is either country obligated to loosen any ethical restrictions that they may have had, especially if not doing so would leave their citizens destined to be part of a permanent world underclass?”

His revelations, to say the least, are scary:

“The National Institutes of Health is proposing a new policy to permit scientists to get federal money to make embryos, known as chimeras, under certain carefully monitored conditions.

One issue is that scientists might inadvertently create animals that have partly human brains, endowing them with some semblance of human consciousness or human thinking abilities.

Another is that they could develop into animals with human sperm and eggs and breed, producing human embryos or fetuses inside animals or hybrid creatures. (See here)

Stuart Newman, a biologist at New York Medical College, notes disapprovingly:  “There have been speculations. But now they’re becoming more real. And I think that we just can’t say that, since it’s possible, then let’s do it.”

Dr G. Owen Schaefer, Research Fellow in Biomedical Ethics at the University of Singapore, thinks that the future of genetic enhancement does not lie in the West. The Chinese (and maybe the Japanese also) would appear to have the edge on us in this field, partly because they have fewer moral inhibitions about playing God in the laboratory. Their ethos seems to be: if it can be done, let’s do it—and to hell with the consequences.

“Would you want to alter your future children’s genes to make them smarter, stronger or better-looking? As the state of the science brings prospects like these closer to reality, an international debate has been raging over the ethics of enhancing human capacities with biotechnologies such as so-called smart pills, brain implants and gene editing.

This discussion has only intensified in the past year with the advent of the CRISPR-cas9 gene editing tool, which raises the specter of tinkering with our DNA to improve traits like intelligence, athleticism and even moral reasoning.

So are we on the brink of a brave new world of genetically enhanced humanity? Perhaps. And there’s an interesting wrinkle: It’s reasonable to believe that any seismic shift toward genetic enhancement will not be centered in Western countries like the US or the UK where many modern technologies are pioneered. Instead, genetic enhancement is more likely to emerge out of China.” (See here)

It would seem from numerous surveys that most people are horrified at these attempts at human enhancement by the Men in White Coats. They regard all such tinkering with nature as fundamentally immoral.

A recent Pew study of 4,726 Americans found that most would not want to use a brain chip to improve their memory, and a majority view such interventions as morally unacceptable. There is even less support for editing genes directly to improve traits in so-called designer babies. The big concern is that tinkering with the human genome carries significant risks.  At the same time, ethical objections often arise. Scientists can be seen as “playing God” and tampering with nature.

Monster, monster, burning bright
In the lab room of the night
What psychotic hand or eye
Did frame thy fearful symmetry?

— With apologies to William Blake

Michael Snyder asks in a controversial article entitled The Era of Chimeras:

Did you know that scientists are creating cow-human hybrids, pig-human hybrids and even mouse/human hybrids?  This is happening every single day in labs all over the western world, but most people have never even heard about it.

How would you interact with a mouse that has a brain that is almost entirely human?  These are the kinds of questions that we will have to start to address as a society as scientists create increasingly bizarre human/animal hybrids.

Snyder reveals that, according to a well-known American geneticist, the human species began as the hybrid offspring of a male pig and a female chimpanzee.

Absurd? Not so. The startling claim is made by Dr Eugene McCarthy, one of the world’s leading authorities on hybridisation in animals. “Over the past decade, things have gotten much, much stranger,” Snyder claims. “For example, scientists have now created mice that have artificial human chromosomes “in every cell in their bodies.”

What should we call a mouse or rat with a human brain? Mouseman or Ratman, I guess. Or, if you prefer a Latin coinage, Rattus humanus.

At this rate, ‘Rattus Humanus’—take a look at his passport picture here—will soon be emerging from the sewers, up from the manholes in the street, and will be sauntering down Fifth Avenue in designer jeans, his whiskers all aquiver. No longer will you be able to use the words “mousy” or “ratface” to describe your less than charming neighbors. If you do, you will receive a stiff fine for disparaging diversity.

Movies with title like Invasion of the Super Rats will no longer be permitted. That will be a crime against multiculturalism. Houses will have to be set aside for human rat migrants. They will steal our jobs! And needless to say, they will interbreed with the human population, eventually leading to the genocide of the human race as we know it.

Yes, Rattus Humanus will have taken over the world!  🙂

I learn with interest that a daring professor at Harvard wants to create a Neanderthal/human hybrid.  He says that he just needs an“adventurous female human” to carry the child.

Professor George Church of Harvard Medical School believes he can reconstruct Neanderthal DNA and resurrect the species which became extinct 33,000 years ago.

He said his analysis of Neanderthal genetic code using samples from bones is complete enough to reconstruct their DNA. “I now need an adventurous female human,” he added.  “It depends on a hell of a lot of things, but I think it can be done.” (See here)

I was thinking of volunteering, but on second thoughts I decided to give it a miss.