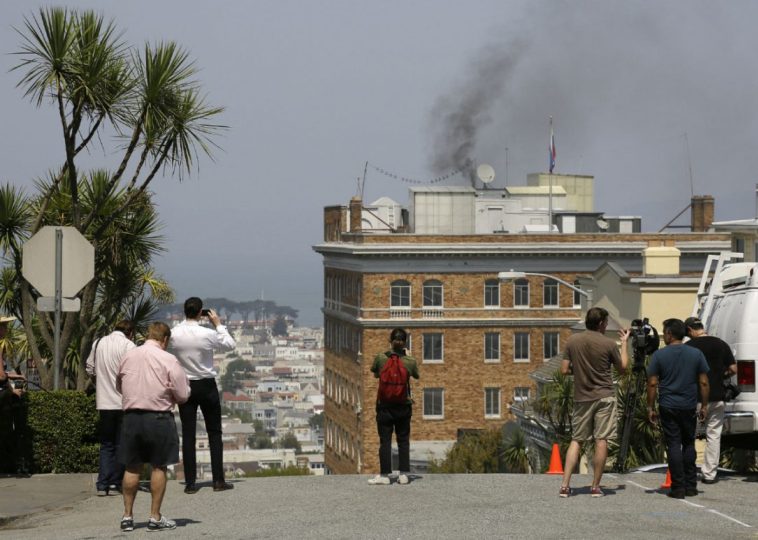 The United States has once again seized diplomatic and consular properties belonging to the Russia Federation and is in the process of conducting raid style searches of the properties which are set to formally begin on the 4th of September.

These actions which first took place in the final full month of Barack Obama’s Presidency and are now taking place at additional Russian diplomatic and consular facilities in the United States under Donald Trump’s Presidency, violate clearly codified international laws which are contained in documents known as the Vienna Conventions.

The following are the provisions of the Vienna Conventions that are presently being violated by the United States.

From the Vienna Convention on Diplomatic Relations

1. The premises of the mission shall be inviolable. The agents
of the receiving State may not enter them, except with the consent of
the head of the mission.

2. The receiving State is under a special duty to take all
appropriate steps to protect the premises of the mission against any
intrusion or damage and to prevent any disturbance of the peace of the
mission or impairment of its dignity.

3. The premises of the mission, their furnishings and other
property thereon and the means of transport of the mission shall be
immune from search, requisition, attachment or execution.

From the Vienna Convention on Consular Relations

Inviolability of the consular premises

1.Consular premises shall be inviolable to the extent provided in this article.

3.Subject to the provisions of paragraph 2 of this article, the receiving State is under a special
duty to take all appropriate steps to protect the consular premises against any intrusion or damage and to prevent any disturbance of the peace of the consular post or impairment of its dignity.

4.The consular premises, their furnishings, the property of the consular post and its means of
transport shall be immune from any form of requisition for purposes of national defence or public utility.

If expropriation is necessary for such purposes, all possible steps shall be taken to avoid impeding the performance of consular functions, and prompt, adequate and effective compensation shall be paid to the sending State.

In summary, these statues of international law codified by the United Nations in 1961 (Diplomatic) and 1963 (Consular) mean that irrespective of the condition of relations between the sending state (in this case Russia) and the receiving state (in this case the US), the diplomatic and consular properties in question must remain free from any kind of molestation including searches, raids, property seizures and the infringement of normal and dignified working practices.

Each of these items of law has been clearly violated by the United States. The US has prohibited diplomatic and consular workers from pursuing their work under normal circumstances. The US molested the peace and freedom of such workers and their families on a personal level and the US is in the process of preparing raid the diplomatic and consular properties which the law states are clearly inviolable.

Even in times of conflict that run much deeper than the current political disputes between Washington and Moscow, the Vienna Conventions have a precedent of being adhered to.

In 1984, an individual inside the Libyan Embassy in London shot and killed a UK police officer. The shots were fired from inside the embassy onto the street below.

Although many  called for the suspect to be brought to trail in an English court, the UK government at the time, a government that had generally poor relations Libya in any case, observed the Vienna Conventions and allowed the embassy workers to return to Libya safely after being named persona-non-grata, something which is sanctioned by the Vienna Conventions.

The US itself raised a claim in the International Court of Justice against the Islamic Republic of Iran over an incident involving the taking of US hostages at the US Embassy in Tehran in 1980.

In 2005, during the second term of George W. Bush, the United States withdrew from an optional provision of the Vienna Conventions allowing for disputes arising between states on matters involving diplomatic and consular facilities and individuals to be dealt with by the International Court of Justice.

This means that if Russia wanted to take legal action against the US for violating its protections under the Vienna Conventions, Russia would have to file the complaint in a US court which is subject to accusations of bias vis-a-vis an international court dealing with a dispute between sovereign states.

The aggregate effect of this means that the US is breaking international law with impunity while giving the victim of this anti-diplomatic aggression few realistic options to deal with the issue, other than to attempt some sort of equivalent retaliation.

Instead of scrutinising the United States for a flagrant violation of international law, the mainstream media is instead pontificating on why smoke is coming out of the chimney at the soon to be closed Russian Consulate in San Francisco, even though such a matter has no real legal implications. Until the premises is involuntarily vacated, the Russian consular staff have the right to use their facilities as they fit.

Russian Foreign Ministry Spokeswoman Maria Zakharova issued the following statement to the conspiracy theorists who have taken an interest in the smoke,

“Now in San Francisco, another circus begins – a new round of baiting called ‘What are you doing there?’.

After giving 2 days for the emergency conservation of the building and deciding to conduct a search in the premises, which had for many years had diplomatic immunity, a search involving FBI employees, the “host party” in the afternoon of September 1 “accidentally noticed” smoke above the building. The truth is that they also did not happen to notice that the was coming from a  pipe.

Immediately there were prepared photo reports about the “emergency situation”, and, as the top of sadism, fire protection was called. Just in case. Suddenly, Russians need help: they still had a couple of hours left to clear the premises.

And then the questions of American journalists poured down about what kind of trickle of smoke rose over the Russian consulate general.

I answer: measures are being taken to preserve the building. In this regard, the windows can be closed, the curtains can be lowered, the light may turn off, water may come down, the doors may be locked, garbage can be disposed of, heating devices must be switched off, life support systems switched on, and much more.

It is unbearably embarrassing to monitor the actions of the US authorities and the entire information campaign. Later everything will be like it always happens in the USA: there will be those who stood behind all this Russophobic hysteria, another mistake will be recognized, perhaps we will hear miserable apologies. But all this will be, as always, later. And now, at this very minute, instead of the celebrations on the occasion of September 1 and the labor routine for issuing passports and visas, the employees of the Consulate General professionally oriented towards the development of bilateral relations are engaged in the conservation of the building…

The wider truth of the matter is that the only thing up in flames is the American government’s respect for international law.