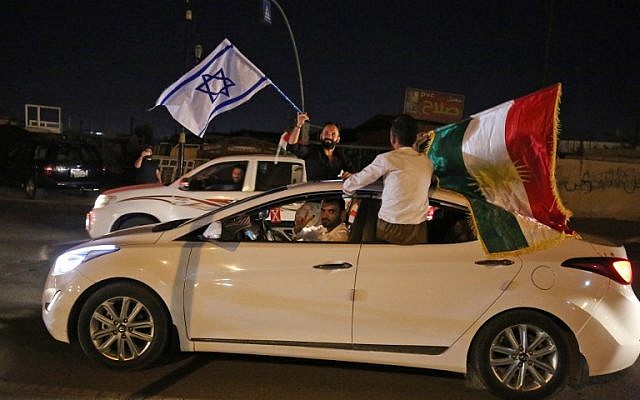 Even a GLANCE at the Israeli press, both on the ‘right’ and on the ‘left’, reveals overwhelming and uncritical support for the ‘freedom’ of the Kurds just as it did during the ‘Arab spring’ when Judea, Inc donned its ‘humanitarian’ suit and with a forked tongue championed the cause of ‘freedom’ for the ‘oppressed and beleaguered’ peoples of Egypt, Syria, and elsewhere while at the same time, making sure that the Palestinians remain firmly affixed within the same century-long imprisonment that organized Jewry had constructed for them.

Secondly, perhaps a little geography will paint a better picture as to what is at stake here and just why Israel would be so forcefully in favor of an ‘independent’ Kurdish state

4 countries–Syria, Iran, Iraq, and Turkey–which Israel seeks to destabilize for as long as it takes in paving the way for that thousands years old dream of ‘Greater Israel’.

Senior Iranian officials claimed Tuesday the independence referendum in Iraqi Kurdistan a day earlier was a “plot” orchestrated by Israel and the United States.

“The Zionist regime and the world arrogance [US] are behind this issue,” the semi-official Fars News Agency quoted the head of the Iranian armed forces, General Mohammad Hossein Bagheri as saying on Tuesday.

Although Bagheri did not elaborate on Israel’s alleged role, the chief of staff to Iran’s Supreme Leader Ayatollah Ali Khamenei claimed the independence referendum was a “Zionist plot” meant to fuel violence in the Middle East following the battlefield defeats in Iraq and Syria suffered by the Islamic State terror group.

“You may rest assured that it is a plot by the Zionist regime under such conditions that the ISIL is collapsing,” Fars quoted Mohammad Golpaigani as saying, using an alternative acronym for IS. Among numerous conspiracy theories posted on Arabic-language and Persian sites are claims that Israel’s Mossad agency is behind the rise of Islamic State.

“Now they have raised a new issue in the region,” he added. The referendum and its related issues will cause many problems for the Kurds and the neighboring countries.”

In addition to the claims from top Iranian officials Israel is behind the independence vote, Turkish nationalists have said the referendum is meant to create a “second Israel.” Yeni Safak, a conservative Turkish newspaper loyal to Turkish leader Recep Tayyip Erdogan, has pointed to the presence of Israeli flags alongside “so-called Kurdish flags” at rallies organized by the Kurdistan Democratic Party (KDP) and claimed that the referendum was part of a Zionist plot.

“Israel, using Masoud Barzani and the Kurdistan Workers’ Party (PKK) terrorist organization as pawns, seeks to obtain the area between the Nile and Euphrates, which is regarded as ‘the promised land’ in the Torah,” said an article entitled “Barzani plans to deliver ‘promised land’ to Israel.”

It added, “Zionists call the ‘Kurdistan’ that Barzani and the PKK want to establish as ‘Kurdo-Judaic,’ the ‘Jewish Kurdistan.’”

Earlier this month, Turkish media published conspiracy theories claiming that Israel was planning to repatriate Israeli Jews of Kurdish origin to Kurdistan after the referendum.

Turkey, Syria and Iran, all of which have their own sizable Kurdish minorities, have all strongly condemned the independence referendum, as has Iraq’s federal government.

While Prime Minister Benjamin Netanyahu has voiced his backing for Kurdish independence, on Monday he instructed ministers in his government to avoid speaking out about the referendum in Iraqi Kurdistan.

Also Monday, Reuters quoted an unnamed Israeli cabinet minister as saying that “Bibi [Netanyahu] asked us not to” comment on the referendum because it was “too sensitive.”

Monday’s referendum in Iraqi Kurdistan was openly opposed by both the US and Turkey, who may have pressured Netanyahu not to express support for the vote.

Similarly, some Kurdish leaders have balked at overt support from Israel, as they face charges from Arab, Turkish and Iranian leaders that an independent Kurdish state would be a potential “second Israel” — that is, an enemy — in their midst.

However, some Kurds have flaunted support from and ties with the Jewish state, waving Israeli flags at pro-independence rallies.

Results of Monday’s referendum, which are nonbinding, are set to be announced later Tuesday, with many expecting a resounding “yes” vote.