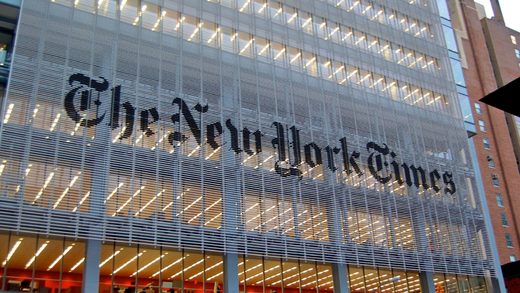 The New York Times’ descent into yellow journalism over Russia recalls the sensationalism of Hearst and Pulitzer leading to the Spanish-American War, but the risks to humanity are much greater now.

Reading The New York Times these days is like getting a daily dose of the “Two Minutes Hate” as envisioned in George Orwell’s 1984, except applied to America’s new/old enemy Russia. Even routine international behavior, such as Russia using fictitious names for potential adversaries during a military drill, is transformed into something weird and evil.

In the snide and alarmist style that the Times now always applies to Russia, reporter Andrew Higgins wrote – referring to a fictitious war-game “enemy” – “The country does not exist, so it has neither an army nor any real citizens, though it has acquired a feisty following of would-be patriots online. Starting on Thursday, however, the fictional state, Veishnoriya, a distillation of the Kremlin’s darkest fears about the West, becomes the target of the combined military might of Russia and its ally Belarus.”

This snarky front-page story in Thursday’s print editions also played into the Times’ larger narrative about Russia as a disseminator of “fake news.” You see the Russkies are even inventing “fictional” enemies to bully. Hah-hah-hah! The article was entitled, “Russia’s War Games With Fake Enemies Cause Real Alarm.”

Of course, the U.S. and its allies also conduct war games against fictitious enemies, but you wouldn’t know that from reading the Times. For instance, U.S. war games in 2015 substituted five made-up states – Ariana, Atropia, Donovia, Gorgas and Limaria – for nations near the Caucasus mountains along the borders of Russia and Iran.

In earlier war games, the U.S. used both fictitious names and colors in place of actual countries. For instance, in 1981, the Reagan administration conducted “Ocean Venture” with that war-game scenario focused on a group of islands called “Amber and the Amberdines,” obvious stand-ins for Grenada and the Grenadines, with “Orange” used to represent Cuba.

In those cases, the maneuvers by the powerful U.S. military were clearly intended to intimidate far weaker countries. Yet, the U.S. mainstream media did not treat those war rehearsals for what they were, implicit aggression, but rather mocked protests from the obvious targets as paranoia since we all know the U.S. would never violate international law and invade some weak country! (As it turned out, Ocean Venture ’81 was a dress rehearsal for the actual U.S. invasion of Grenada in 1983.)

Yet, as far as the Times and its many imitators in the major media are concerned, there’s one standard for “us” and another for Russia and other countries that “we” don’t like.

But the Times’ behavior over the past several years suggests something even more sinister than biased reporting. The “newspaper of record” has slid into yellow journalism, the practice of two earlier New York newspapers – William Randolph Hearst’s New York Journaland Joseph Pulitzer’s New York World – that in the 1890s manipulated facts about the crisis in Cuba to push the United States into war with Spain, a conflict that many historians say marked the beginning of America’s global empire.

Except in today’s instance, The New York Times is prepping the American people for what could become World War III. The daily message is that you must learn to hate Russia and its President Vladimir Putin so much that, first, you should support vast new spending on America’s Military-Industrial Complex and, second, you’ll be ginned up for nuclear war if it comes to that.

At this stage, the Times doesn’t even try for a cosmetic appearance of objective journalism. Look at how the Times has twisted the history of the Ukraine crisis, treating it simply as a case of “Russian aggression” or a “Russian invasion.” The Times routinely ignores what actually happened in Ukraine in late 2013 and early 2014 when the U.S. government aided and abetted a violent coup that overthrew Ukraine’s elected President Viktor Yanukovych after he had been demonized in the Western media.

Even as neo-Nazi and ultranationalist protesters hurled Molotov cocktails at police, Yanukovych signaled a willingness to compromise and ordered his police to avoid worsening violence. But compromise wasn’t good enough for U.S. neocons – such as Assistant Secretary of State Victoria Nuland; Sen. John McCain; and National Endowment for Democracy President Carl Gershman. They had invested too much in moving Ukraine away from Russia.

Nuland put the U.S. spending at $5 billion and was caught discussing with U.S. Ambassador Geoffrey Pyatt who should be in the new government and how to “glue” or “midwife this thing”; McCain appeared on stage urging on far-right militants; and Gershman was overseeing scores of NED projects inside Ukraine, which he had deemed the “biggest prize” and an important step in achieving an even bigger regime change in Russia, or as he put it: “Ukraine’s choice to join Europe will accelerate the demise of the ideology of Russian imperialism that Putin represents. … Putin may find himself on the losing end not just in the near abroad but within Russia itself.”

So, on Feb. 20, 2014, instead of seeking peace, a sniper firing from a building controlled by anti-Yanukovych forces killed both police and protesters, touching off a day of carnage. Immediately, the Western media blamed Yanukovych.

Shaken by the violence, Yanukovych again tried to pacify matters by reaching a compromise – guaranteed by France, Germany and Poland – to relinquish some of his powers and move up an election so he could be voted out of office peacefully. He also pulled back the police.

At that juncture, the neo-Nazis and ultra-nationalists spearheaded a violent putsch on Feb. 22, 2014, forcing Yanukovych and other officials to flee for their lives. Ignoring the agreement guaranteed by the three European nations, Nuland and the U.S. State Department quickly deemed the coup regime “legitimate.”

However, ethnic Russians in Crimea and eastern Ukraine, which represented Yanukovych’s electoral base, resisted the coup and turned to Russia for protection. Contrary to the Times’narrative, there was no “Russian invasion” of Crimea because Russian troops were already there as part of an agreement for its Sevastopol naval base. That’s why you’ve never seen photos of Russian troops crashing across Ukraine’s borders in tanks or splashing ashore in Crimea with an amphibious landing or descending by parachute. They were already inside Crimea.

The Crimean autonomous government also voted to undertake a referendum on whether to leave the failed Ukrainian state and to rejoin Russia, which had governed Crimea since the Eighteenth Century. In that referendum, Crimean citizens voted by some 96 percent to exit Ukraine and seek reunion with Russia, a democratic and voluntary process that the Times always calls “annexation.”

The Times and much of the U.S. mainstream media refuses even to acknowledge that there is another side to the Ukraine story. Anyone who mentions this reality is deemed a “Kremlin stooge” in much the same way that people who questioned the mainstream certainty about Iraq’s WMD in 2002-03 were called “Saddam apologists.”

But what is particularly remarkable about the endless Russia-bashing is that – because it started under President Obama – it sucked in many American liberals and even some progressives. That process grew even worse when the contempt for Russia merged with the Left’s revulsion over Donald Trump’s election.

Many liberals came to view the dubious claims of Russian “meddling” in the 2016 election as the golden ticket to remove Trump from the White House. So, amid that frenzy, all standards of proof were jettisoned to make Russia-gate the new Watergate.

The Times, The Washington Post and pretty much the entire U.S. news media joined the “resistance” to Trump’s presidency and embraced the neocon “regime change” goal for Putin’s Russia. Very few people care about the enormous risks that this “strategy” entails.

For one, even if the U.S. government were to succeed in destabilizing nuclear-armed Russia sufficiently to force out President Putin, the neocon dream of another malleable Boris Yeltsin in the Kremlin is far less likely than the emergence of an extreme Russian nationalist who might be ready to push the nuclear button rather than accept further humiliation of Mother Russia.

The truth is that the world has much less to fear from the calculating Vladimir Putin than from the guy who might follow a deposed Vladimir Putin amid economic desperation and political chaos in Russia. But the possibility of nuclear Armageddon doesn’t seem to bother the neocon/liberal-interventionist New York Times. Nor apparently does the principle of fair and honest journalism.

The Times and rest of the mainstream media are just having too much fun hating Russia and Putin to worry about the possible extermination of life on planet Earth.

Investigative reporter Robert Parry broke many of the Iran-Contra stories for The Associated Press and Newsweek in the 1980s. You can buy his latest book, America’s Stolen Narrative, either in print here or as an e-book (from Amazon and barnesandnoble.com).