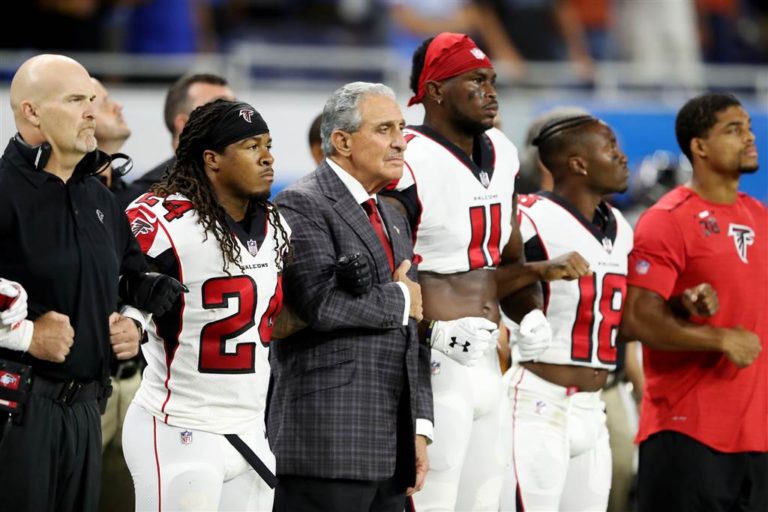 The NFL will soon be history. So will the NBA and MLB if they follow the same pattern of disrespect.

SOTN, along with many other Alt Media platforms, have been calling for the BOYCOTT of Hollywood, the Pop Music Industry and Pro Sports for years.

We have posted numerous articles, videos and audios explaining the absolute necessity for such a nationwide initiative.

And all it took was one tweet from President Trump to kick off this boycott.

You really gotta love it: Trump uses Twitter like a wrecking ball…without even intending to knock down the NFL.

One simple tweet from him sets up the league — the entire league — to knock itself down.

Way to go Roger Goodell & Company.  You guys are really doin’ a swell job.  An awesomely great demolition of the whole fractured and highly flawed edifice known as the National Football League.

Y’all need to do some serious consulting with the NBA and MLB so that they will follow perfectly in your footsteps.  Then we’ll have a boycott hat trick.   Thank. You. Very. Much!

In case the reader is unaware, the meticulously manufactured Celebrity Culture has become an unmitigated disaster for the American people.  Professional sports are one of the 3 major pillars of this fastidiously planned synthetic society within American society.

Not only does the Celebrity Culture occupy way too much time and space throughout the USA, it’s exceedingly destructive to the nation in ways both seen and unseen.  Its worst and most lasting effects are quite imperceptible which makes it all the more dangerous and scary.

To say that the Celebrity Culture has profoundly and irreparably torn the very fabric of American society is a gross understatement.  Which is why it needs to be terminated, once and for all. Today’s Celebrity Society Begs For A Spanking

All one has to do is listen to the mind-controlled musicians, actors and athletes respond to the mainstream media inquiries about Donald Trump, and the grim reality becomes crystal clear.  They are nothing but flacks for the globalists who comprise the New World Order ruling cabal.

Did you get that?

Celebrities across the board are, with the exception of very few, nothing but high-paid pitchmen for the NWO agenda.  They are actually chosen for their natural proclivities to embrace this communist plot for world domination.  Those who show much promise, like George Clooney, Madonna, Johnny Depp, Amy Schumer, Jennifer Lawrence, Ashley Judd and Meryl Streep, are elevated even higher in the firmament of ‘stars’.  Incidentally, all of these so-called stars have trashed Trump like there’s no tomorrow.

Unfortunately for these highly paid promoters of an extremely permissive society, they truly have no choice in the matter.  Once they sign their contracts, they are owned and operated by the SYSTEM.  And the agency system locks them in in so many ways it boggles the mind.  The ‘Agency System’ Back Story That Has Never Been Told

As a matter of historical fact, the very backbone of the Celebrity Culture is the notorious agency system.  The agents and attorneys who enforce this draconian regime know every nerve to hit and vessel to squeeze in order to compel unwavering compliance. In this fashion, every single celebrity is forced on a reservation of conformity that never stops giving to them, until they become politically incorrect.

See how whole football teams now willingly disrespect the paying public at the direction of the agency system—an essentially totalitarian network that actually reports to a much higher power— and ultimately to the Black Nobility. When that covert controlling authority passes the word down that the teams will kneel, they kneel, no ifs, ands, or buts.

New World Order: Creation of The Venetian Black Nobility and Committee of 300

These celebrities have been totally bought over decades via fat pay packages and perks of every sort and kind.  Once their golden handcuffs are firmly in place, it’s almost impossible for them to break free and give it all up. They really are like crack addicts who are ever-so-carefully addicted to the cushy life of a celebrity.  Once they exceed the critical point of no return, they are on that reservation for life.  Even celebrity quarterback Tom Brady has succumbed to the demands of Deep State, and he probably isn’t even aware of it.  Boston Patriot’s Tom Brady Proves He’s No Patriot

Today’s football stadium (as well as baseball stadium and basketball arena) is the modern-day equivalent of the Roman Colosseum.  In fact, they both serve(d) the exact same purposes–to distract the common folk from what truly ails society.  It also provides a palliative from the grim reality that surrounded Rome, as it does the United States. Empires always breed misery because of the sheer costs of maintaining such an unsustainable and artificial entity.

Until the 2016 election cycle that saw the victory of Donald Trump, it could be said that the bread and circuses provided by professional sports entertainment served its purposes quite well.  However, things have changed—BIG time!  Especially the red state patriots and conservatives will no longer be satisfied with the fake gratification of weekly ball games. They now see the contests as totally fake, and the players as complete frauds.

KEY POINT: It’s a well-known fact in the betting parlors that the most popular professional sports are the most gambled events in the world.  After football, basketball and baseball, there is soccer and boxing, golf and tennis.  Once a pro sport has become the object of serious gambling interest, it becomes thoroughly corrupted.  The more intensive the betting, the more fixed in advance the games are.  In fact, what American sports fans have been watching for decades are many games with predetermined outcomes.  In other words, just like the incessant mainstream media news, many are fake sport matches.

Big “bread and circuses” events like the Super Bowl, the World Series and the NBA Playoffs are particularly effective at creating a body politic that is “happy and docile”, three times a year.  In this way, it’s much easier for the statists to pull off just about any scam they so please — often in broad daylight — just as they’ve done, year after year, in Washington, D.C.

Special Note:
There is a very carefully hidden back story to this staged NFL protest charade.  The actual plot is an extremely dire one as it concerns the continuity of the American Republic.  For there is a criminal conspiracy at work that is using this engineered protest movement throughout professional sports as a launchpad for something much more nefarious.  As follows: Staged NFL Protest Explodes! Who Are the Real Perps and Why Now?

If ever there was a time to boycott the games that grown men get paid a LOT to play, that time is now.  Not only pro sports, but also the trash that comes out of the Motion Picture and TV Industries needs to be completely avoided.  Why patronize such utter garbage?!  Should our children ever be exposed to such filth?

Then there is the Music Industry that needs to be rejected and shunned.  The number of mind-controlled musicians in 2017 is enough to keep the C.I.A. MK–ULTRA mind-control experiments going for decades.  Many of these drug-adled singers were completely taken over when they were quite young and never even had a snowball’s chance in hell (This is a very sad predicament indeed as they have been methodically victimized).  Their parents turned them over at a tender age to those who run this never-ending game on America. Nevertheless, some of these celebrity performers have made common cause with the NFL to use the most watched half-time shows as a veritable showcase for satanic rituals.

Truly, the deeper one goes down these rabbit holes, the worse things get.  It’s as though the entire realm of entertainment industries were originally conceived to end up where they are now.  Each of these celebrity-fabricating industries produces content so foul, and characters whose everyday behavior is so atrocious, that there is only one response—a BOYCOTT full-bore.

To give these spoiled brats, ingrates and prima donnas one penny or second of time is an absolute waste.  Hence, a national boycott is clearly the best way to show them who their employers really are.  That they would continually bite the hand that feeds them shows just how lost they all are.  How else do they think they can be paid such ridiculously exorbitant comp packages?!

Of course, it’s we the paying public who have been played for fools over many years now. Perhaps it’s time to take back our power, and our hard-earned money, from these Illuminati pawns.  After all, it’s basically the ruling families of the same multi-century empire who built all these stadiums past and present.  They really do know the incomparable power of “bread and circuses”.