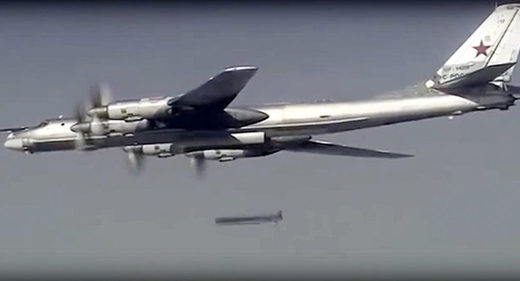 Russian Tu-95MS strategic bombers have carried out strikes on the most important Daesh and Al Nusra Front facilities in several Syrian provinces, the Russian Defense Ministry said on Tuesday.

Russian Defense Ministry spokesman Maj. Gen. Igor Konashenkov said the airstrikes were carried out in the provinces of Idlib and Deir ez-Zor. The bombers took off from the Engels airfield in Russia, flew over the territory of Iran and Iraq and launched Kh-101 cruise missiles against the targets, he explained.

“The sudden strikes destroyed a number of terrorist command posts, troop concentrations, and military equipment, as well as ammunition depots,” Konashenkov said in a statement.

Konashenkov stressed that all the targets were far away from any villages, US-backed Syrian Democratic Forces (SDF) positions or US security service strongholds.

The news comes after the SDF accused Russia of attacking their positions near gas fields in Deir ez-Zor, killing and wounding several militants. However, the Russian military denied the claims.

Meanwhile, the Russian Defense Ministry has released aerial footage of the Daesh positions north of Deir ez-Zor showing US special forces’ equipment deployed in the area.

Commenting on the revelation, the Russian defense ministry spokesman said that Russia had not received an answer on whether US troops were supporting Daesh in Syria.

“I would like to draw your attention to the fact that the Daesh strongholds, where US special forces were spotted, lack any signs of fighting. There are no shell craters.”