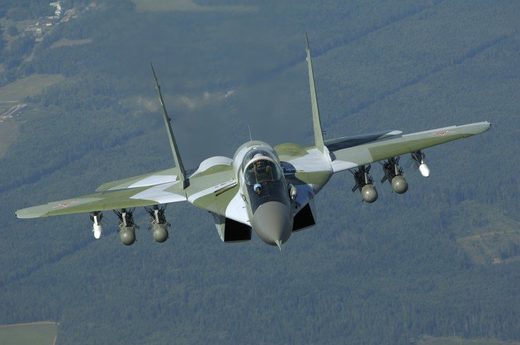 by Alexander Mercouris
The Duran

The Russian Ministry of Defence has unexpectedly confirmed the deployment of MiG-29SMT fighters to Russia’s Khmeimim air base in north east Syria.

The MiG-29SMT should not be confused with the new MiG-35, which has yet to enter service with the Russian Aerospace Forces, and which is an essentially new aircraft with new electronics and engines and a new airplane structure, though one which uses the old MiG-29’s planform. By contrast the MiG-29SMT is essentially a heavily modernised MiG-29, an aircraft that entered service with the Russian air force in the 1980s.

It is nonetheless a potent aircraft which however is designed for air to air combat against enemy fighters rather than for strike roles or ground attack. In this it differs from the SU-35 and SU-30 fighters also deployed by the Russian Aerospace Forces to Syria, which though exceptionally effective air combat fighters are nonetheless true multirole fighters, which are also very effective when used for ground strikes.

What explains the deployment of the MiG-29SMT to Syria?

Ever since the start of the Russian intervention in Syria in 2015 the Russians have openly and frankly spoken of Syria as a testing ground for their military systems. It would be in keeping with this approach to use Syria to test the combat performance of the MiG-29SMT, making it incidentally the first MiG fighter deployed by the Russians to Syria on a sustained basis, though four much more advanced naval MiG-29K fighters were also briefly deployed to Syria last autumn on board Russia’s carrier Admiral Kuznetsov.

In 2009 the Russians confirmed that a contract had been agreed between Russia and Syria for the supply of 24 MiG-29SMT fighters to Syria. The sale was however postponed in 2012 because of the Syrian war. However with most of western Syria now pacified and under the Syrian government’s control, and with ISIS just weeks away from final defeat in eastern Syria, it is now possible to speak of the Syrian war finally winding down, making it possible for the supply of the 24 MiG-29SMTs to proceed.

When the Syrian war is finally over the Syrian air force – which has experienced heavy equipment losses because of the war, and whose aircraft are anyway largely obsolete Soviet designs delivered to Syria by the USSR in the 1970s and 1980s – will need modern new aircraft to re-equip itself, especially in light of the increasing threats to Syria from Israel.

At that point the transfer of the 24 MiG-29SMT fighters to Syria may finally take place, with the deployment of some of these aircraft to Syria being intended to prepare the ground for this.