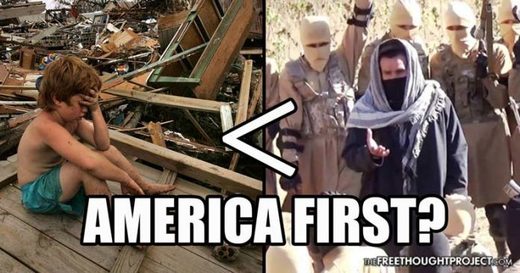 As estimates to fix the damage caused by Hurricane Harvey reach over $100 billion, the U.S. Congress has pushed for a bill that would raise the national debt in order to pay for it. Kentucky Sen. Rand Paul suggested a different solution-why not make cuts to foreign aid in order to help Americans in need?

“In Washington, we have a disease-or a syndrome, rather. I call it the ‘dinosaur syndrome,’ big hearts, small brains. Unfortunately, it’s a reoccurring problem. Year after year, bill after bill, day after day,” Paul said during a speech on the Senate floor. “In Washington, it is argued that you are more compassionate if you give away more of someone else’s money. I would argue that true compassion is in giving your own money away. I would argue that truly rational policy is giving away money that you have. So it’s one thing to give away other people’s money, it’s another thing to give away money that you don’t even possess.”

According to estimates from three independent groups who specialize in disaster relief and risk management, the cost of Hurricane Harvey “ranged from $70 billion to $108 billion,” meaning that the storm has arguably done more damage than any natural disaster in the United States, since at least 1980.

Paul noted that while the price tag of repairs for Harvey may be large, the national debt is even larger, and increasing the debt to pay for this storm makes no sense when the U.S. has the option of making cuts within its current budget.

“We as a country have a $20 trillion debt. We borrow $1 million every minute,” Paul said. “And yet, we are putting forward a bill to allocate $15 billion to those who are suffering from Harvey without paying for it-without finding the money anywhere, just simply adding it to our tab. Adding it to our $20 trillion bill. How did we get to $20 trillion in debt? Big hearts, small brains. Nobody has the courage to say, ‘Why don’t we pay for it? Why don’t we be legislators and stand up like men and women and say, let’s set priorities.'”

I am headed to the Senate floor now to discuss my American First amendment to pay for Hurricane spending with cuts to spending overseas.

In order to cover the $15 billion request, Paul proposed an amendment that would allocate $7.85 billion in aid for repairing the damage caused by Hurricane Harvey, with an additional $2.5 billion set aside to prepare for Hurricane Irma-all by simply making cuts to foreign aid.

Paul noted that with the current budget, American taxpayers are funding a failed foreign policy by sending billions of dollars to countries such as Afghanistan, where President Trump recently promised to continue the longest war in U.S. history.

With around $20 billion in unobligated foreign aid available, Paul pointed out that the United States Agency for International Development is not exactly hurting for money, and some of the programs it is spending taxpayer dollars on are absolutely ridiculous. Watch the video below for Paul’s full list of examples:

However, the Senate did not agree, and when Senate Majority Leader Mitch McConnell made a motion to table Paul’s proposal, it passed 87-10. Just like that, common sense was thrown to the wayside at the expense of American children and their children – who will, unfortunately, be the ones paying for this complete lack of economic understanding.

While Rand Paul’s amendment was centered around foreign aid, it should also be noted that the United States spends nearly $600 billion on its military every year-far more than any other country in the world-and when the Pentagon has a habit of “losing” at least $10 trillion in recent years, everyone should start questioning why money continues to be wasted in foreign nations, while Americans suffer in the United States.