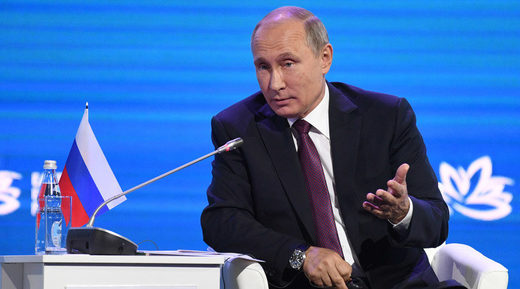 Russian president Vladimir Putin is confident that there will be no conflict with the use of weapons of mass destruction in North-East Asia, he said at the Eastern Economic Forum (EEF) in Vladivostok.

“We hope it will not come to a conflict with the use of weapons of mass destruction in North-East Asia”, Russian president Vladimir Putin stated at the Eastern Economic Forum (EEF) in Vladivostok.

“There are possibilities to achieve the settlement of Pyongyang’s problem by diplomatic means. This is possible and must be done,” he stated.

Putin believes in the possibility of solving the question of the Korean peninsula.

“We need to work together. We can and must achieve positive results,” Putin said, speaking at the Eastern Economic Forum on Thursday.

He recalled that in 2005, participants in the negotiations about the situation on the Korean peninsula were close to solving the problem.

“We almost agreed on everything in 2005. Agreements were reached, according to which North Korea assumed the obligation to curtail the nuclear missile program, and all the other participants in this process promised to contribute to this process, and spoke of the need to restore normal, good relations between the North and the South, on the possibility of implementing tripartite Russia-North-South projects,” the Russian leader noted.

“But then, unfortunately in my opinion, someone demanded from North Korea what it did not promise, and gradually this situation deteriorated to the current level,” Putin said.

The Russian leader believes that Pyongyang perceives nuclear weapons as its only protection, and will not abandon them.

“They [in North Korea] view the possession of atomic weapons and missile technology as their only means of protection. Do you think they’ll give it up now?”

The military hysteria around North Korea is counter-productive, Putin warned.

“The build-up of some military atmosphere, of hysteria, is counter-productive, in my opinion. It will lead to nothing, because what is happening now, of course, is a provocation from North Korea. This is quite obvious. They are provoking the situation, but if they are doing it, they are not stupid people, believe me. So, they expect the corresponding reaction from [their] partners, and they achieve it,” Putin said.