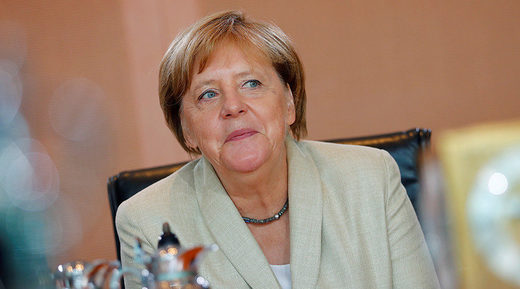 A stable European security architecture only can be built by involving Russia in the process, German Chancellor Angela Merkel has said. She also called on the West to honor its obligations under treaties signed with Moscow.

Despite current tensions between the West and Moscow, “we can establish a European peace order only with Russia,” the chancellor said in her Saturday video podcast published on the German government’s website. She went on to say that, “in the field of the European defense and security policy, we should do our best to improve our contact with Russia.”

The German leader noted that she has always advocated for keeping an open “dialog between NATO and Russia” and “honoring” the respective treaties despite the differences over the Ukrainian crisis.

Western countries have repeatedly criticized Moscow for what they described as a failure to meet its obligations under the Minsk Agreements, thus justifying the extension of sanctions.

In July, German Foreign Minister Sigmar Gabriel said European sanctions on Moscow is nothing more than a desire “to resolve the conflict in eastern Ukraine” and achieving the implementation of the Minsk Accords.

The Minsk II Agreements, worked out by Ukraine, Russia, France and Germany under the auspices of the OSCE in 2015, created the basis for a ceasefire between Kiev’s forces and rebels in eastern Ukraine. The accords further stipulated principles for a peaceful solution to the Ukrainian crisis.

Moscow has argued it’s not a party to the conflict and has criticized Kiev for not carrying out its obligations under the Minsk Agreements. In July, Russia’s Foreign Minister Sergey Lavrov said “everyone is interested” in fulfilling the Minsk agreements, to which Kiev “is the main part.” He later said that Ukraine’s eagerness to stay true to its obligations within the peace deal is “doubtful.”

Merkel also drew attention to the importance of all parties abiding by the various disarmament treaties, adding that it particularly concerns the agreements signed by Russia and the US.

Relations between Moscow and Berlin are far from smooth though. There is profound disagreements over the crisis in Ukraine.

Germany supported the anti-Russian sanctions imposed by the US, the EU and some of their allies in 2014, following the outbreak of conflict in the southeastern Ukraine and Russia’s reunification with Crimea following a referendum.

In June, a German government report“assumed” that Russia allegedly tries “to influence parties, politicians and public opinion, with a particular eye to the 2017 parliamentary election.” However, German officials themselves admitted they have no evidence to support their assumptions.

Still, it is not the first time Angela Merkel has said the West should improve relations with Russia. During the G20 summit in Hamburg in July, she said “everyone would only benefit” from a “good and honest” dialog between Russia and the US.

She also drew attention that the world still faces a range of problems which can only be resolved through the joint efforts of Russia and the US, including the Syrian crisis, the issue of disarmament and the situation around the Korean Peninsula.

Merkel also criticized the unilateral US anti-Russian sanctions that were imposed in June, including fines on EU companies involved in joint energy projects with Russia, such as Nord Stream 2, a Gazprom-run flagship pipeline being built to deliver Russian gas to European customers.