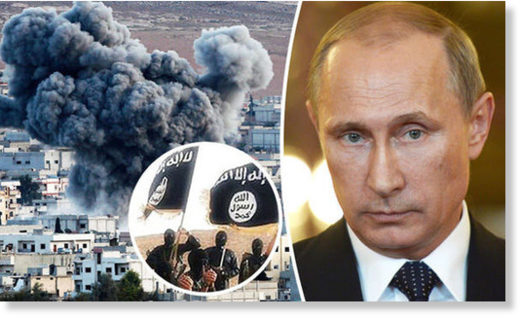 Back in September 2015, ISIS had been rampaging across Syria, slaughtering civilians and destroying towns and cities, for about 4 years. At that time, there was good reason to believe that the Syrian Arab Army would soon be defeated by ISIS and ‘rebel’ forces, and the Syrian government ousted. This was despite the fact that a US-led coalition had allegedly been ‘bombing ISIS’ for almost a year, with the strange effect that the jihadis had steadily increased their territory across Syria and Iraq. Obviously, at this point, it’s pretty clear that the only reason that band of paid mercenaries called ‘ISIS’ was ever in a position to threaten Syria was because it was receiving massive funding, weapons and training from the USA and its Gulf Allies.

Once the Russian military intervened on September 30th 2015, however, ISIS and the assorted other jihadi ‘rebel’ groups saw their territory and numbers rapidly reduced, US government aid and support for ISIS and the rebels notwithstanding. After the liberation of Aleppo by Russian forces late last year, several more dramatic victories by the Syrian Army (backed by the Russian air force) have followed with the most recent, and perhaps definitive, victory coming in this week’s liberation of the Syrian city of Deir ez Zor.

It may have escaped your notice, but over the course of the last two years, the Western media and Western governments have consistently ignored or criticized the victories of the Syrian Army backed by the Russian air campaign. This is, of course, not surprising given that ISIS is nothing more than a US and Gulf State proxy army, specifically designed to wage war on the Syrian people, destroy Syria as a nation and remake it in the West’s image remake it in the West’s image of a vassal of Empire. On the occasions that the Western press saw fit to comment on the achievements of the Syrian and Russian militaries, they chose to cynically condemn them as ‘Russian aggression’ or ‘Assad killing his own people’.

This week’s liberation of Deir ez Zor is a case in point. While there have been no specific condemnations, you’ll find it difficult to find even one American mainstream media outlet report on the most recent news that a Russian air strike on an underground command center near the city killed 40 ISIS members, including four field commanders. Among the senior militants killed is internationally wanted Abu-Muhammad al-Shimali, the self-proclaimed “emir of Deir ez-Zor.”

An Iraqi-born Saudi citizen (surprise, surprise!) and a former Al-Qaeda member, al-Shimali pledged his allegiance to ISIS in 2015 (in return for a fat check) and became notorious for smuggling terrorists into Syria (on behalf of the USA and Saudi Arabia). But just to keep the charade going, Al-Shamali was designated a ‘high profile target’ by the US State Department, which offered a bounty of up to $5 million for information leading to his capture in 2015. Several European intelligence agencies also claimed that Al-Shimali was involved in the November 2015 Paris attacks.Now you might think that, with the news that this brutal killer responsible for so much carnage in Syria and France has been taken out of action, the US State Dept. and the French government might put aside their ridiculous anti-Russian ideology and make a public statement of congratulations to the Russian and Syrian militaries and governments for this admirable achievement. But you’d be wrong. They have nothing to say; in fact, they are probably having a hard time controlling their urge to scream bloody murder that Russia just killed some of their favorite assets

But hold their tongues they will, and for good reason, lest the name of another ‘ISIS commander’ killed in the same compound gets too much attention: Gulmurod Khalimov, a Tajik and Islamist military commander who ‘defected to ISIS’ in 2015 after he had received years of training in the USA through the US State Dept.’s Diplomatic Security/Anti-Terrorism Assistance program. After ‘defecting’, Khalimov said that he planned to return home to establish Sharia Law in his Central Asian nation and to take jihad to Russia. What a coincidence. Of course, the Pentagon and CIA are no strangers to spending $$billions of US taxpayers’ money on training and arming jihadis.

There is also the little matter of the claim by an unnamed ‘diplomatic source’ that at least a dozen ISIS field commanders, including two of ‘European origin’ were evacuated from Deir ez Zor by a US Air Force plane at the end of August when it became clear the city would fall to the Syrian army. I’m usually skeptical of claims by ‘unnamed diplomatic sources’, but on this occasion the allegation is credible given what is known about US direct support to jihadis in Syria. In June this year, the commander of Russian forces in Syria, Col. Gen. Sergei Surovikin, said that ISIS fighters were allowed to leave two villages southwest of Raqqa and move toward Palmyra. Surovikin said that the U.S. coalition, along with allied Kurds, “collude with the leaders of ISIS, who surrender the areas under their control and head to provinces where Syrian government forces operate.”

But I suppose I shouldn’t complain too much, or expect too much from the psycho warmongers in the Pentagon and the CIA, their disgusting headchopper friends in Saudi Arabia, and the Western media that is a propaganda arm of all three. Their little plan for phony civil war-induced regime change in Syria has fallen flat on its face thanks to the Russian military under the stewardship of Vladimir Putin and the stellar efforts of Lebanese Hizb’allah and the Iranian militias. Nothing can change that now, not even the US’ ‘plan b’ to carve out a Kurdish state in northern Syria.

While the reality-creators in Washington might like to think that a US-allied Kurdish enclave in northern Syria and Iraq can secure continued American ‘ownership’ of the Middle East and prevent the rise of Russia and Iran as the dominant powers in the region, this is a literal and figurative pipe dream. If a Kurdistan is cut out of Syria and Iraq, it will only be with the consent of Iran, Turkey, Syria and Iraq, all of whom have very good reasons (and effective means) to prevent the establishment of a Kurdish homeland. Both the geopolitical and geographic reality of the situation therefore means that an official Kurdish state would be allied with its immediate neighbors, not imperial warmongers and blow-in headchoppers.